When osteopathic schools were forming throughout the country in the 1890s, two students at the Northern Institute of Osteopathy in Minneapolis—the Rev. Mason W. Pressly and Oscar John Snyder—targeted Philadelphia as a future home for an osteopathic college.

While the “City of Brotherly Love” had a rich history of medicine, it had but one “osteopathist” by the time Pressly and Snyder graduated in 1898 and 1899, respectively. The two doctors of osteopathy (DOs) followed through with their vision, incorporating Philadelphia College and Infirmary of Osteopathy (PCIO) on January 24, 1899. They rented two rooms in the Stephen Girard Building at 21 S. 12th Street—the first of many homes for the College—and opened their doors to students and patients.

In September 1899 the first PCIO degree was awarded to a transfer student; the first PCIO “class,” comprised of one woman and one MD, graduated in February 1900. It was not long before the early graduates formed an alumni association.

The word of osteopathy spread quickly in Philadelphia. As the number of students and faculty grew, the College moved to larger quarters, establishing its first “campus” at 33rd and Arch Streets, a then-suburban neighborhood in West Philadelphia. In a mansion surrounded by grassy lawns, a tradition of student life started with the organization of athletics, professional societies, fraternities and sororities.

By 1906 the College opened the Osteopathic Dispensary at 1617 Fairmount Avenue, forerunner of the Osteopathic Hospital of Philadelphia. The College moved to 1715 N. Broad Street (1908-1912), then to 832 Pine Street in the city’s Society Hill section, where a hospital would come to fruition at 410 S. Ninth Street. 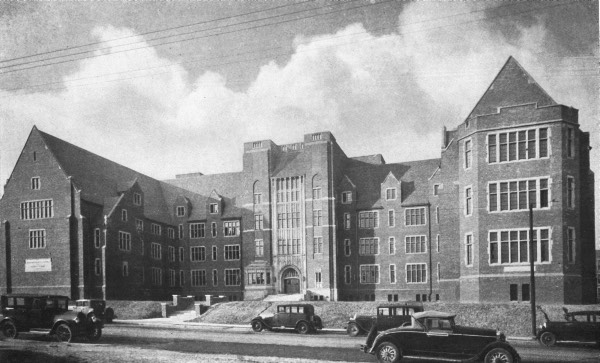 After many prosperous years on Pine Street, PCIO bought its first building at 19th and Spring Garden streets in 1916. The College, officially renamed Philadelphia College of Osteopathy (PCO) in 1921, added a new hospital to the rear and acquired two adjacent townhouses—one for additional classrooms and clinics, the other for a nurses’ home.

A training school for nurses and Department of Free Clinics were established in the hospital, which featured a surgical amphitheater. The clinics would become a critical component of practical instruction for generations of students.

The Depression and War Years 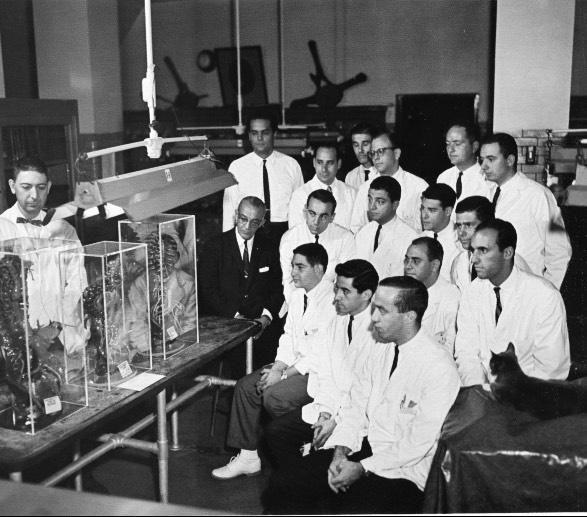 Expanding again, PCO was completing construction of a new collegiate Gothic-style college and hospital building at 48th and Spruce streets on the eve of the Depression. Times were tough, but with strong leadership from the board of directors and others, PCO weathered the storm.

The 1930s were a time when the curriculum expanded, pre-osteopathic and graduate schools started and PCO created the profession’s first Department of Osteopathic Research. It was also a time when the clinics, known for their “booth doctors,” played an increasingly important role in providing health care to the community.

During the war years, PCO accelerated the curriculum from four years to three, then welcomed many returning GIs into the classes of the late ’40s and ’50s. Medicine was becoming more specialized and complex, increasing the need for clinical training. 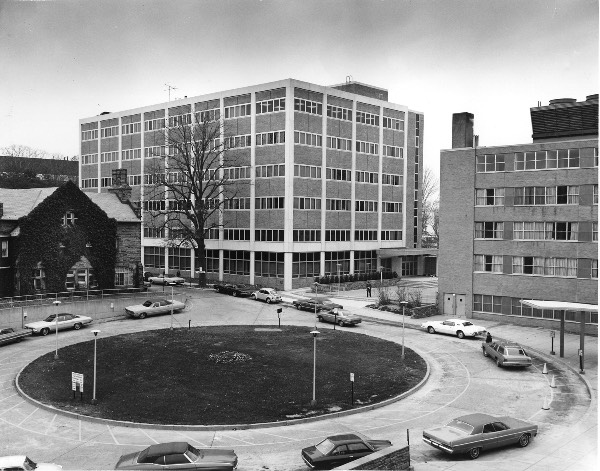 In time, 48th Street no longer met the needs for state-of-the-art medical education and patient care or the demands for larger class sizes. In 1957, the former Moss Estate was acquired at City Avenue and Monument Road. The College was renamed Philadelphia College of Osteopathic Medicine (PCOM) in 1967. A year later, the Frederic H. Barth Pavilion of the Hospitals of PCOM opened, and Evans Hall—the classroom, library and laboratory building—was completed in 1973. An adjacent five-story office building, acquired in 1979, was renovated into classrooms, laboratories and medical offices and later named Rowland Hall after PCOM’s fourth president.

During the 1970s, PCOM enhanced the basic sciences by recruiting many PhD faculty members, instituted new programs in osteopathic education, expanded residency programs and established a School of Allied Health. 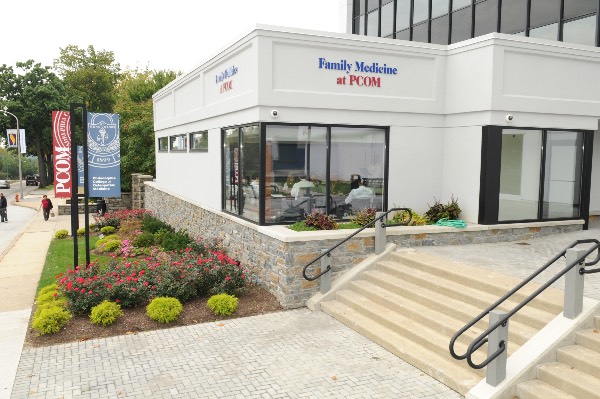 In keeping with the College’s mission to train primary care physicians, PCOM opened a rural healthcare center in Sullivan County, Pennsylvania, and several other health care centers in urban Philadelphia neighborhoods. The centers provide care to medically underserved populations while serving as key sites for the clinical education of PCOM students–not only DO students but physician assistant and psychology students as well.

In 2020, PCOM transferred ownership of the clinical practice in Sullivan County to Family Practice Center, PC, owned and operated by PCOM alumni.

The addition of non-DO academic programs to the curriculum starting in the early `90s began a new era of diversification for PCOM. In 1993, the College launched a graduate program in biomedical sciences. Recognizing a need for primary care mental health providers, the College started a Doctor of Psychology in Clinical Psychology program in 1995. In 1998, the College added a Master of Sciences in Health Sciences in Physician Assistant Studies program.

In 2001, the Organizational Development and Leadership program was added to the College's offerings.

In 2002, the Psychology Department expanded to include school psychology programs. That same year, the Master of Science in Forensic Medicine program was established. Six dual-track degree programs were extended as options for students from the osteopathic medical program as well as students in the graduate programs and from partnering institutions. Strategic partnerships from “home base” clinical teaching fellowship partnerships increased.

In 2015, the College revamped the counseling programs to include a Master of Science degree in Mental Health Counseling.

To expand and modernize its campus, PCOM embarked on an ambitious campus overhaul from 1995-1999. An expansion of Evans Hall added a modern OMM lab, classrooms, the Office of Admissions and a cafeteria. Evans Hall, Rowland Hall and the Levin Administration Building were renovated, and landscaped greenery gave the College a true campus feeling.

In 1997, a larger, state-of-the-art PCOM Healthcare Center—Cambria Center opened a block from the old site. The final phase of the campus overhaul was completed in 1999 with the opening of a 55,000-square-foot activities center. The center includes exercise equipment, student lounges and basketball and racquetball courts.

In 2001, the College purchased the former City Avenue Hospital. The building was razed, and the College sold a parcel of land to neighbor WPVI Channel 6. Investment income from the sale has been used for need-based student scholarships; the remaining acres have been reserved to accommodate future construction. 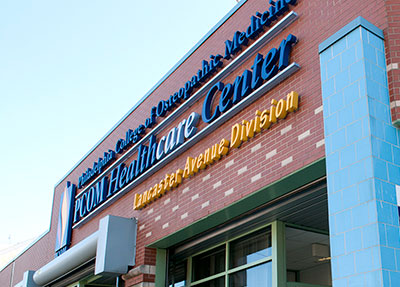 In 1999, the College achieved a major milestone when it became accredited by the Commission on Higher Education of the Middle States Association of Colleges and Schools. The same year, PCOM opened its new, expanded PCOM Healthcare Center—Roxborough Division on Henry Avenue in Philadelphia. Renovations to the College’s West Philadelphia Healthcare Center, Lancaster Avenue Center, followed. The healthcare center is now three times its former size and includes updated exam and procedure rooms and a pharmacy. In 2016, patient services provided at Roxborough Center were relocated to the Roxborough Memorial Hospital Medical Office Building and Family Medicine at PCOM.

Although the College’s priority is solidly focused on teaching, research has played an increasingly important role. Another growth area for the College has been the use of technology in education. PCOM’s goal to increase technology was boosted by a $1.4 million federal grant to establish a Center for Medical Informatics, Education Outreach. This project involves putting course materials on the web as a complement to the classroom, wiring classrooms so Internet resources can be accessed and hooking up the affiliated teaching sites so information can be shared. 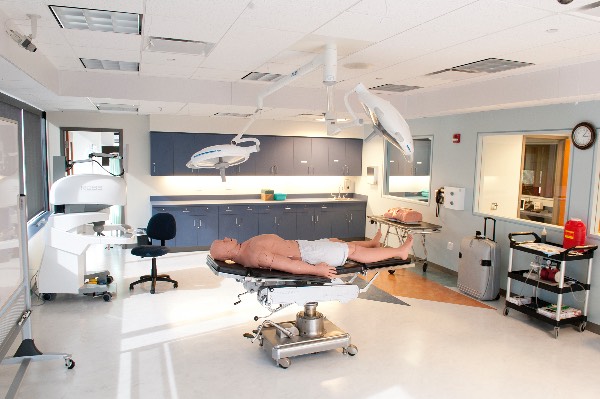 In 2002, the College purchased a human patient simulator for use in its clinical learning and assessment lab. STAN, short for Standard Man, is a sophisticated mannequin that breathes, has a heartbeat, pupils that react to light and medication, a pulse that can be felt at five locations and lung sounds. He can even talk. STAN can be programmed to mimic almost any medical situation that might occur and accurately mirrors human responses to such procedures as CPR, intravenous medication, intubation and catheterization. The clinical learning and assessment lab has since been expanded to include a birth simulator, a laparoscopic simulator, an endoscopic simulator and a cardiac catheterization simulator in addition to other state-of-the-art training simulators. In 2014, the 11,000-square-foot facility was renamed the Dr. Michael and Wendy Saltzburg Clinical Learning and Assessment Center (CLAC) in honor of alumnus Michael C. Saltzburg, DO '77, and his wife, Wendy. The Saltzburg Clinical Learning and Assessment Center was funded by significant gifts made by the Saltzburgs as well as generous contributions from the Commonwealth of Pennsylvania's Redevelopment Assistance Capital Program and other donors.

The Center for the Study of Chronic Diseases of Aging (CCDA) was created in 2003. The mission of the CCDA at Philadelphia College of Osteopathic Medicine is to improve the quality of life for all individuals suffering from age-related chronic diseases and disorders. The CCDA is supported, in part, by the Osteopathic Heritage Foundation.

In 2015, the Department of Education accepted and approved PCOM’s application to obtain university status. The change remains in institutional status only. The status did lead to the formation of four schools: the College of Osteopathic Medicine, the School of Health Sciences, the School of Pharmacy, and the School of Professional and Applied Psychology. 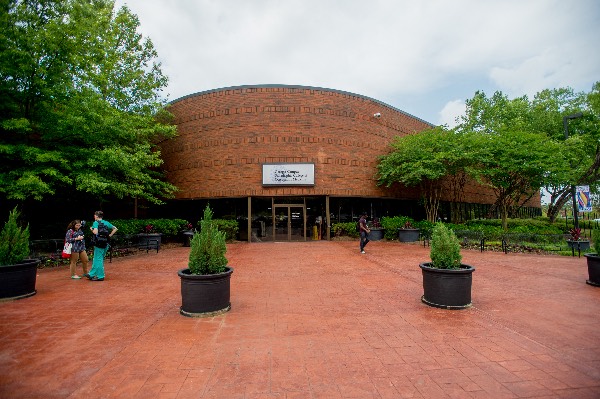 In 2005, the College opened its branch campus, Georgia Campus – Philadelphia College of Osteopathic Medicine (GA-PCOM) in Suwanee, Georgia, with a focus on helping to fill the need for more healthcare professionals in the South. Renamed PCOM Georgia in 2019, the Suwanee location offers professional doctoral degree programs in osteopathic medicine, pharmacy and physical therapy as well as master’s degree programs in biomedical sciences and physician assistant studies.

In 2014, PCOM received reaccreditation status and will be reviewed again in the 2023-2024 academic year. Visit our accreditation page for details regarding College and program accreditation.

On December 5, 2017, PCOM received initial approval from the American Osteopathic Association’s (AOA) Commission on Osteopathic College Accreditation (COCA) to establish an additional location in Moultrie, Georgia. PCOM South Georgia welcomed its inaugural class of DO students in August 2019. In 2020, PCOM South Georgia expanded its academic offerings to include the biomedical sciences program.