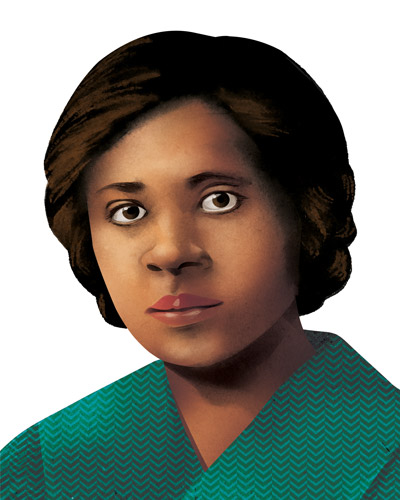 On July 4, 1912, a boxing match between Jack Johnson and Jim Flynn attracted trains full of spectators to Las Vegas, New Mexico. Making that journey was a young Black man from Kokomo, Indiana, who became enthralled with Las Vegas and relocated there. The city, which predated the Nevada resort of the same name by 70 years, had a small African American community, but no physician to care for them. LaRoy Oran Christy eventually convinced his sister to leave Indiana and set up a medical practice in New Mexico. Meta L. Christy, DO, a 1921 graduate of Philadelphia College of Infirmary and Osteopathy (PCIO), later Philadelphia College of Osteopathic Medicine, would dedicate nearly four decades to serving this community and advancing the osteopathic profession in the Southwest.

Born in 1895, the future osteopathic physician was the daughter of a schoolteacher and a dressmaker, descendants of free African Americans who settled in Salem, Indiana, from Newberry, South Carolina, in the 1820s. Dr. Christy was one of John and Arminda Christy’s six children, three of whom died by 1900. At age 7, she lost her 18-year-old brother Harley, who died of epilepsy at the Indiana School for Feeble-Minded Youth, and, at age 10, her father. Dr. Christy herself suffered from extended periods of illness in her early 20s. Perhaps all the sickness and loss she experienced inspired her to become a doctor. 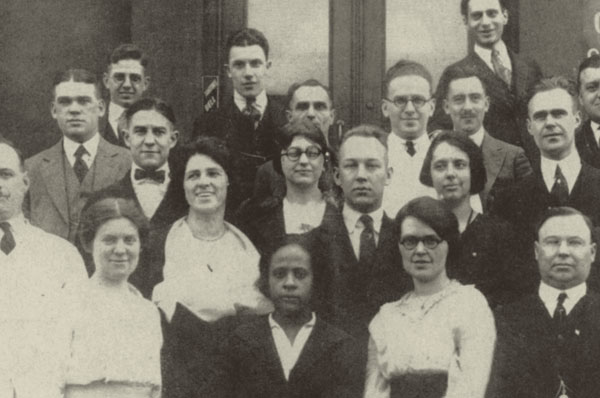 In 1917, Dr. Christy began her medical education at the Massachusetts College of Osteopathy (MCO) in Boston, where she spent at least two years before transferring to PCIO. At the time, MCO was still reeling from a scandal that had made national news—a “triangle tragedy” of murder and suicide among the faculty. MCO was also running into accreditation issues with the American Osteopathic Association, being the only college to refuse the AOA’s right to inspect and classify the colleges. (The AOA placed MCO on probation in 1920 and ultimately rescinded its accreditation in 1926.) Jennifer Weber, exhibits manager at the Museum of Osteopathic Medicine, hypothesizes, “Dr. Christy would have realized that her credentials would be questioned and if MCO had a poor reputation and was in poor standing with the AOA it might put her reputation at risk having a degree from the institution.”

The Kokomo Tribune mentioned Dr. Christy attending MCO and spending vacation with her mother, Arminda, in the summer of 1919, so it is unclear whether she transferred to PCIO in the fall of 1919 for her third year, or in 1920 in time for her fourth year. Regardless, she arrived at PCIO’s Spring Garden Street location, where a new three-story hospital had recently opened. Between the 50-bed hospital, which included a radiology department, and the clinics, Dr. Christy had ample resources to hone the skills that would take her into a lifetime of general practice. 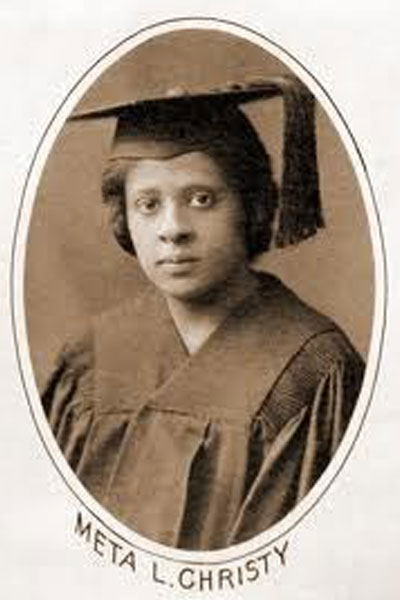 After graduation, Dr. Christy returned to Kokomo, Indiana, living with her mother and setting up private practice in their home. She was one of three osteopaths in a city with 46 “physicians and surgeons.”

Dr. Christy experienced profound loss in 1924. Arminda Christy died from acute suppurative appendicitis and localized peritonitis. The young osteopathic physician couldn’t save her mother and, the following year, she too had an attack of appendicitis. It seems to have run in the family, as brother Oran was also operated on for it at some point.

In March 1926, the local newspaper reported, “Dr. Meta L. Christy accompanied brother Oran Christy to his home for future residence in Las Vegas, New Mexico.” With less to tie her to Indiana, she answered her brother’s appeal to move to New Mexico to provide medical care to the African American community. In 1929, she passed the osteopathic boards that admitted her to practice in the state.

Dr. Christy boarded in a house on Sulzbacher Street, a duplex of sorts. Owners Joseph and Maggie Marable lived in one part and she and another Kokomo transplant, a fireman whom she presumably knew from home, rented rooms elsewhere on the premises. For $20 monthly rent, Dr. Christy also established her medical practice (clinic) and a lifetime of community service at that house, which was located in a predominately poor, white, working-class neighborhood. According to historian Joseph Lordi, “Dr. Christy’s medical practice catered to African Americans who, because of discrimination at that time, were denied service at the local hospital. There were about 100 African Americans and no one to treat them. She also treated white patients.”

By 1933, the landlords were living in Albuquerque. Joseph Marable, who worked as a railroad porter, returned to the Las Vegas house by 1940, without Maggie, who died in 1941. At some point before Joseph passed away in 1943, Dr. Meta L. Christy became Mrs. Meta L. Christy Marable, which dispels reports that she never married.

In her adopted community, Dr. Christy joined the First United Presbyterian Church and was baptized there in 1950. She got involved in church life, helping to host church dinners.

In the 1940s, Dr. Christy served on the board of directors of the New Mexico Osteopathic Medical Association, which in 1955 awarded her a certificate of merit and, in 1956, its Distinguished Service Award. She was also active with the Southwestern Osteopathic Association, attending its 1965 annual convention in Las Vegas.

At the time of her death in 1968, Dr. Christy, a “widely known osteopathic physician” according to her obituary, was serving on the Health Fact-finding Committee to which New Mexico Governor David F. Cargo had appointed her. Four DOs were among those who honored her as pallbearers. In 1995, PCOM’s Student National Medical Association paid tribute to the world’s first African American osteopath by establishing the Meta L. Christy Award, their top honor, in recognition of exemplary practice of osteopathic medicine, service to the community, and inspiration to future doctors of osteopathic medicine. In 2010, nearly a century after a boxing match sowed the seeds of Dr. Christy’s life of medicine in the Southwest, the state unveiled a historic marker—located outside the Las Vegas courthouse and museum—to honor her as part of the New Mexico Historic Women Marker Initiative.

Year-long programming by PCOM’s Office of Diversity and Community Relations and Office of Institutional Advancement celebrates the legacy of Dr. Christy. All are invited to participate.

Meta Christy House: An Embodiment of a Rich and Inclusive Community

The PCOM Board of Trustees has approved the renaming of Overmont House. Meta Christy House, a 12-story property, is scheduled to open in 2021, and has recently been converted into 224 housing units. A ribbon-cutting ceremony/special remarks will be held prior to occupancy. A portrait of Dr. Christy and a commemorative plaque, commissioned by the College, will be dedicated and showcased in the building’s lobby. Copies of the portrait will be hung in public spaces on each of the three College campus locations.

“It is my hope that Meta Christy House will serve as an embodiment of the increasingly rich and inclusive community our College is. In all ways, all who study, work and live at PCOM are welcome, at home here,” says Jay S. Feldstein, DO ’81, president and chief executive officer.

“Renaming our building is one of many initiatives we are taking to tell PCOM’s heritage and history more fully and to diversify our campus space.”