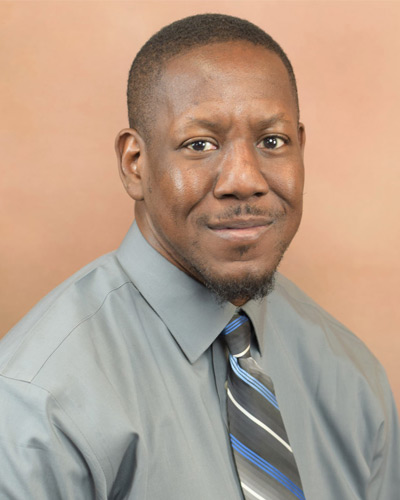 Robert Walker, PhD, associate professor of physiology at PCOM South Georgia recently moderated a panel of local physicians on the topic of the state of the Black male in medicine.

Together the panel discussed the identity, health and wellness of the Black male with the PCOM community including students, staff and faculty. The group of Black male physicians touched on discrimination, microaggressions and racial disparities experienced by physicians of color both in and out of the healthcare setting while underlining the importance of increasing the number of Black men in medicine through exposure, inspiration and mentorship.

Dr. Crenshaw, a nephrologist at Archbold Medical Center in Thomasville and adjunct professor at PCOM South Georgia, grew up with two parents in the home, something he considered an extreme advantage.

“We’re in a tremendous dilemma at this time. Black men have been walking around with one chain on their leg from the beginning,” said Dr. Crenshaw, referring to the lack of male role models. “If they don’t have a male figure in their home, it puts them at a serious disadvantage, not to mention the economic and social factors that also impact them.”

According to the American Osteopathic Association (AOA), osteopathic medical schools across the country saw 30,367 applicants in 2018. Only 1.19% of admitted students were Black males. In comparison, PCOM South Georgia received 233 applications from Black students in 2019-2020. The College accepted 27 of those students and had eight of the accepted students join the Doctor of Osteopathic Medicine program--accepting 11.5% of applicants and matriculating 3.4%. Of those Black students, five were male and three were female.

“Black men have a better chance of making it to the NBA than to osteopathic medical school,” said the moderator, Dr. Walker.

The panelists highlighted the impact that mentors can make in the lives of young Black men, which many of them had experienced first-hand. Marcine Pickron-Davis, PhD, PCOM Chief Diversity and Community Relations Officer, emphasized the importance of mentoring.

“As we know, representation matters. Connecting with other Black male physicians is key to the success of Black male students persevering through medical school,” she said.

Dr. Crenshaw, an Alabama native who grew up in one of the poorest counties in the country, said he has always faced microaggressions and continues to do so as a physician.

“We have to perform and maintain a high level of calling that supersedes the microaggressions that we experience. We have to give our Black males the nudge to do great and help them achieve their dreams,” he said.

Dr. Williams, a gynecologist with Colquitt Regional Medical Center, agreed and added that he never would have gone to medical school without the push of a colleague and mentor.

“I was working as a nurse practitioner when a physician looked at me and said, ‘So, when are you going to medical school?’” he said. “If it weren’t for him, I wouldn’t be here. If we can shift the paradigm so that young students know that it’s cool to be smart, there will be a trickle down effect where they are able to take care of themselves and their future families.”

The PCOM admissions team knows the importance of a diverse student body.

“We actively recruit and admit a student body that reflects the diverse communities in South Georgia,” said Dana Brooks, assistant director of admissions. “Research shows that physicians from similar ethnic backgrounds and from medically underserved communities are more likely to care for patients of those same backgrounds.”

To learn more about how PCOM respects, encourages and promotes diversity, visit the Office of Diversity and Community Relations.