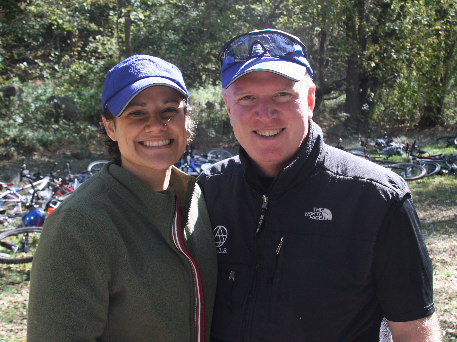 For William Gibbons (DO ’15), the road to graduation from medical school was a long and winding one. He first stepped onto PCOM’s campus 30 years ago for an Open House event, while he was still an undergraduate at Holy Family University. He was set to begin his path toward becoming a doctor, but, he says, life got in the way.

“I had a very young family to support after I got my bachelor’s degree,” Mr. Gibbons says. “I had to find a way to support them first, so I put my dreams of medical school on hold for a bit.”

He took a position with the Delaware Valley Transplant Program—now the Gift of Life Donor Program—as an organ preservation technician. In that role, he would coordinate the protocols for organ donation; facilitate the transportation of organs; and even assist with transplant donor surgeries.

“I’ve ridden in the backs of ambulances, in a Learjet, and seen the sun come up over Philadelphia more times than I can count,” he recalls. “But after a while, I needed something with more stable hours. I wanted to spend more time with my family.”

He decided to start again on his path to medical school, but needed the science credentials to get there. He enrolled in the perfusion program at Drexel University, and after graduating in 1995, he worked at several area hospitals, assisting with serious surgeries. As a perfusionist, Mr. Gibbons was responsible for monitoring a patient’s circulatory and metabolic systems, and informing the rest of the surgical team of that patient’s status.

He enjoyed the field, but “sensed [it] was changing,” so he decided the time was right to finally apply to PCOM. In 2010, he was accepted. “Everything seemed to be going right,” he says. “I was finally on the path I wanted to be on.”

However, the day of his orientation, he got a call from his wife, Anne; she had a mammogram and after a biopsy, she was diagnosed with breast cancer. “My first priority became my family, and I had to fit my studies in wherever I could,” Mr. Gibbons says. “But there was no turning back at this point, no breaks—I had quit my job to go back to school, so I had to move forward.”

After his wife’s diagnosis, Mr. Gibbons said they both tried not to dwell on it, and instead figure out a plan to move forward. She received treatments and he continued his education, all while trying to raise their young children. In his second year at PCOM, he also dealt with the sudden death of his mother. “It was stressful,” he admits, “but my struggles were nothing compared to my wife’s. She was fighting for her life.”

Today, he says, his wife and family are doing well. And he draws on his past experiences—from working in transplantation, to perfusion, to watching his wife battle cancer—to improve himself and help others.

“Life has challenged me repeatedly, tested me, given me reasons to quit, time and time again,” he says. “But as Babe Ruth once said, ‘You just can't beat the person who never gives up.’ All of these things will make me a better doctor in the end.