Justin Burkholder and Nikhil Chinmaya
DO '15 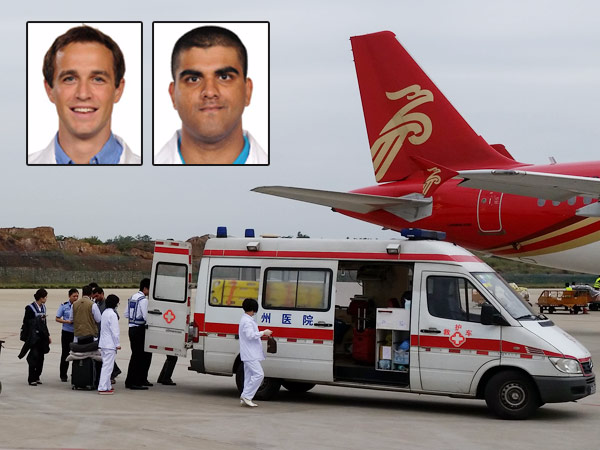 Justin Burkholder (DO ’15) (left) and Nikhil Chinmaya, (DO ’15) (right) assisted a fellow
passenger during a medical emergency on board a flight from India to China.

It’s only usually in Hollywood that someone utters the words, “Is there a doctor in the house?” It’s even less common to hear, “Doctor, should we land this plane?” However, for Justin Burkholder (DO ’15) and Nikhil Chinmaya, (DO ’15) it was a real-life experience during an overnight flight from New Delhi, India to Guangzhou, China in April.

At about 5 a.m., Mr. Burkholder and Mr. Chinmaya were asleep in their seats, exhausted from traveling, when a flight attendant made an announcement that a passenger needed medical attention. “We jumped from our seats to help and soon realized that we were the only medical professionals onboard,” says Mr. Burkholder.

As the two medical students approached the passenger, they encountered an older male in clear distress who was lying on his back with several worried family members huddling around him. While assessing the patient’s airway, breathing and circulation—the “ABCs” of emergency medicine—they realized that they faced a significant language barrier. After finding another passenger who could translate for them, they learned the patient was dizzy and having chest pain.

After sifting through mountains of paperwork and overcoming the language barrier, Mr. Burkholder and Mr. Chinmaya learned that the ailing passenger was a victim of a suicide bombing attack in Afghanistan in 2014 and suffered multiple health issues as a result, including complete paraplegia from the T3 vertebrate. The passenger was flying to China to receive additional medical evaluations and consultations.

The two men drew on their training at PCOM to assess the passenger and check his vital signs, which they found to be stable. They learned that the passenger’s chest pain was longstanding and not acute. After conducting a history and physical, they found that the patient began to feel better, but for the remainder of the flight, they monitored and reassessed his condition every 30 minutes. They also requested an ambulance be present when the plane landed, and were able to hand the patient off to the Chinese EMS crew on arrival.

Both Mr. Burkholder, who will begin an emergency medicine residency at Mount Sinai Medical Center in Miami Beach, and Mr. Chinmaya, who will begin an internal medicine residency at Danville Regional Medical Center in Danville, Virginia, say the experience was eye-opening, but one that made them confident that their training at PCOM would allow them to provide quality medical care in any situation. “It was the true test before graduation and something that most medical providers never experience in their careers,” says Mr. Chinmaya.

“This was the first time the burden of decision was placed on us, and it was not on an American street corner or in a controlled hospital environment,” adds Mr. Burkholder. “This was at 40,000 feet in the air, at 5 a.m., with communication barriers and limited resources, on the other side of the world, on board an international commercial airliner.”