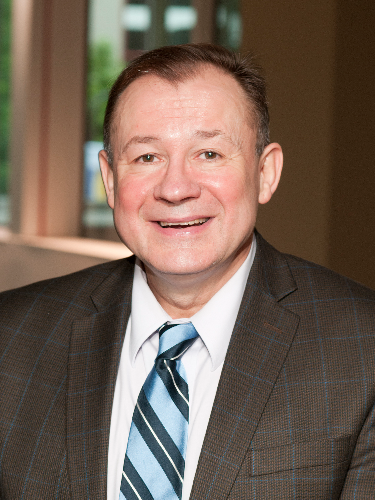 Living in the Moment

In the span of five decades, Gerd Naydock (PsyD ’15) has lived about five lifetimes—and none would be considered “easy.” As a very young boy, Dr. Naydock was taken out of his mother’s care due to her battles with mental illness, and as a result, he largely grew up in orphanages in Germany (where he was born) and in Baltimore. After the facility in Baltimore closed when he was just nine years old, Naydock entered into that city’s foster care system, where he remained until he “aged out” at 18. He nearly didn’t finish high school, and when he did, higher education was not in the cards.

“The part of Baltimore I lived in was very industrial—one of the largest steel mills in the world used to be there,” he explains. “So high school was geared toward teaching vocational arts, and there wasn’t much encouragement to go onto higher education.”

Dr. Naydock followed that trend and worked at a paint factory as his first job. One winter morning, he was heading to work, when he had an epiphany. “It was such a nasty job, you could smell chemicals all the time, and I wondered, ‘Is this all there is?’” he says. “I was so depressed I said to myself, ‘I have to get out of here!’ That drove me to find a Marine recruiter and enlist.”

He enlisted at the age of 19, and worked as a Russian translator during a time when the Cold War was in full swing. “It was the best thing I ever did in my life,” Naydock says. “I realized I had a lot more spirit in me than I thought, and that maybe I could apply myself academically.”

“I think I've been doing therapy since I was a kid,” he says. “I was a precocious kid, I think, and adults—even my foster parents—would often tell me about their problems. And I finally realized that maybe that’s what I was ultimately supposed to be doing.”

For the past 21 years he’s done exactly that as a clinical social worker. He has worked in prisons, hospitals, private practice, hospices and managed care. Most recently, he interned at PCOM’s Center for Brief Therapy, but prior to that, he worked for the Veteran’s Administration. While there, he did outpatient therapy and also served as a suicide prevention coordinator. He says his experience working with veterans, as well as his own traumas growing up as an orphan, have fueled his interest in areas such as post-traumatic stress disorder.

“What is it about people that helps them overcome things?” he says. “I think everyone has that resilience in them. I did. I think it’s your belief about your past that can either make you or break you—it shouldn’t really define you as a person.”

To that end, Dr. Naydock says that he has been able to overcome his own struggles largely by focusing on the present moment—not the future or the past—and he brings that into his therapy sessions with his clients.

“I think I realized that as a child, and I think that’s what ultimately saved me,” he says. “I didn't get stuck in regrets and resentments and disappointments of the past. And I can’t solve problems that haven’t happened yet, or may never happen. I don’t get stuck in that cycle.”