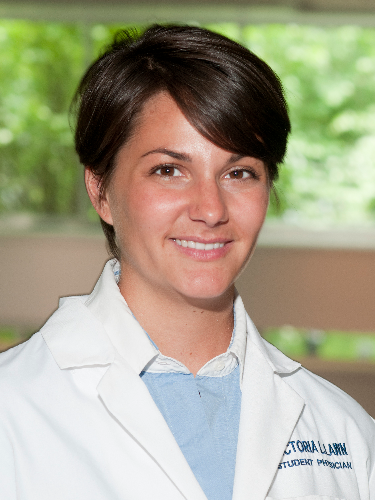 Breaking the Stigma of Mental Illness

Sometimes, a casual conversation can lead to a big idea. That’s exactly what happened for Victoria Lawn (DO/MPH '15), who met Daniel Lowenstein, MD, professor and vice chair of neurology at University of California San Francisco (UCSF), on a flight from Frankford, Germany to India a few years ago. Ms. Lawn and Dr. Lowenstein began talking about the mental health of medical students, and he told her of a program students had implemented at UCSF where medical students could share their experiences with mental health issues in a safe space.

Ms. Lawn was intrigued and began researching how she could bring a similar program to PCOM. She found that medical students tend to have higher rates of depression than their peers. Among practicing doctors, she found that women physicians have a 130 percent higher rates of suicide than women in the general population, and about 400 doctors attempt suicide each year.

“The stigma surrounding mental illness—particularly among medical students and physicians—is a public health problem,” Ms. Lawn says. “How can we address these issues in our patients if we can’t address them in ourselves?”

To that end, Ms. Lawn—along with Matt Jaffa, DO ’14 and Catherine Babbitt Cook, DO ’14—came up with a program designed to break down that stigma among medical students. In Fall 2012, they implemented a yearly, three-hour session that second-year students could take part in, during which students share stories of either their own battles with mental health issues or of friends’ or family members’ struggles. Students then break into smaller groups and discuss ways to cope and manage stress while in the medical profession.

The session is integrated into the “Patient Perspectives” series that occur during the second year of the neuroscience block of classes in the DO program. Ms. Lawn says that Denah Appelt, PhD, professor, bio-medical sciences, was instrumental in getting the session added to the neuroscience block, and that Tina Woodruff, chief student affairs officer, helped raise awareness of resources students can take advantage of if they feel themselves struggling. Ms. Lawn also says the timing of the sessions is key, as national trends show that rates of burnout among medical students is highest during their third year.

Since the program started, it has grown into a permanent DO Council Committee called the Student Wellness and Academic Transition Team, which is a group of students and faculty committed to the mental health and well-being of all students.

Ms. Lawn also studied changes in perceptions among students both before and after their participation in the session, and found that students were more accepting of those with serious mental illness and more inclined to self-disclose about their own issues to a colleague after participating. She presented her findings at the American Association of Colleges of Osteopathic Medicine’s annual conference in April.

“This is a community-building opportunity,” Ms. Lawn says. “It helps each of us deal with our own feelings and stress levels, while also teaching us how to care for others.”