How Much Do Pharmacists Make? | PCOM School of Pharmacy
Skip to main content
SCHOOL OF PHARMACY
Request Information
Loading...

How Much Do Pharmacists Make?

In May 2021, according to the Bureau of Labor Statistics (BLS), the median annual wage for pharmacists was $128,570. This number represents the midpoint in pharmacist wages—half of all pharmacists earn more and half earn less. The highest 10 percent earned more than $164,590.

What is the average salary of a pharmacist?

Glassdoor, a job and recruiting site, reports an attractive average base pay for pharmacists of $119,742 as of May 2022. This average was calculated from thousands of pharmacist salaries submitted anonymously to the site.

According to Sonia Amin Thomas, PharmD, BCOP, an assistant professor at PCOM School of Pharmacy, salary is just one factor to consider in choosing a career path.

"The area in which you will practice, the job description of what you may or may not want to do, the type of patient population in the area and the general culture of the workplace are bigger decision factors in choosing a job," she said.

Which states have the highest salaries for pharmacists?

While industry plays a significant role in determining how much you will make as a pharmacist, location is also a major determining factor. BLS data shows that, in 2021, a pharmacist in California, Texas or another top-paying state could expect an annual mean wage between $126,950 and $146,140 while one in a lower paying state could expect between $95,660 and $119,250. In Georgia, where PCOM School of Pharmacy is located, the annual mean wage for pharmacists last year was $119,660. Atlanta, GA—located less than an hour away from the PCOM School of Pharmacy—offered an annual mean wage for pharmacists of $120,040 in 2021 making it one of higher paying metropolitan areas in the country.

Nationwide, the BLS reports, the annual mean wage as of May 2021 was $125,690. The mean wage is an average calculated by multiplying the hourly mean wage by a year-round, full-time rate of 2,080 hours.

The top five highest paying states for pharmacists in 2021 according to the BLS were California, Alaska, Oregon, Washington and Vermont. The highest paying metropolitan area was New York-Newark-Jersey City (NY, NJ, PA) with an annual mean wage of $128,630.

What is the job outlook for pharmacists?

A career in pharmacy may offer a good salary in some areas and specialties, but are there enough high-paying jobs available? From 2020 to 2030, about 11,300 openings for pharmacists are projected each year, on average. Pharmacist employment is expected to increase in hospitals and clinics where they will oversee medications and provide patient care including tasks such as testing blood sugar or cholesterol. An aging U.S. population will further increase demand as chronic disease associated with an older population will require more prescription medications. 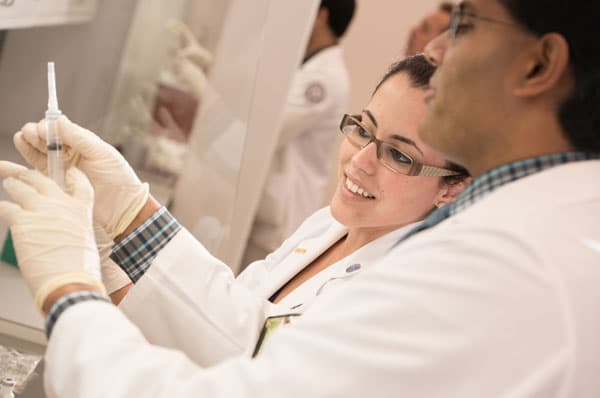 While competition for these jobs will likely be high, a solid educational foundation coupled with residency program experience or applicable certifications can give you an advantage as a job seeker.

"Pharmacy has so many different areas in which someone can practice," Thomas added. "One thing in common is being able to educate and help patients to enhance patient care and further advance pharmacy as a profession."

Visit our Doctor of Pharmacy (PharmD) program page to learn how PCOM School of Pharmacy can equip you with the skills and knowledge needed to succeed in this rapidly changing profession.

About PCOM School of Pharmacy