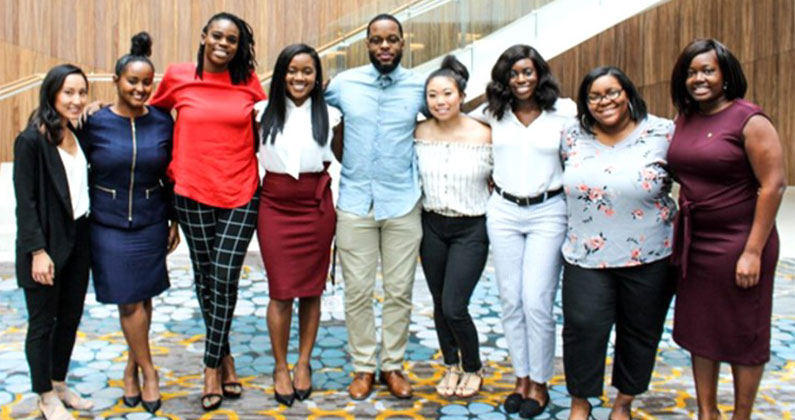 PCOM Georgia's Zeta Rho is a chapter of Kappa Psi, the largest and oldest pharmacy fraternity in the United States. Founded in 1879, Kappa Psi's mission is to "develop leaders with a passion for service to their community while creating lifelong professional connections."

The fraternity's annual convention brings officers and members together to conduct business and highlight member and alumni accomplishments. The 2019 convention was held in Washington DC from July 17-21. This year's convention slogan was "Making an Impact."

By attending the convention, Jessica Mulbah, PharmD '22, explained she was able to see the hard work of her fellow members and gain a deeper respect for the organization.

"There were two moments during the convention that really touched my heart," Mulbah recalled. "The first was seeing our grand regent tear up while speaking on 'Reach Out and Read,' which is the organization's largest philanthropic project."

"The second," she continued, "was finding out that the PCOM Zeta Rho Chapter won the award for 'Top Performing Chapter.'"

The convention also serves as a platform for members to network with fellow students and alumni. Mulbah explained she was able to speak with non-conventional pharmacists working at large companies and government agencies including NASA, FDA, Mayo Clinic and more.

After having the opportunity to interview students running for office positions within the national chapter, Mulbah shared she was inspired to get more involved as a new member of Kappa Psi and as a future pharmacist.

Begin your journey as a healthcare professional. Learn more about the Doctor of Pharmacy (PharmD) program at PCOM Georgia.