Learn about past presidents of the College and PCOM's history. 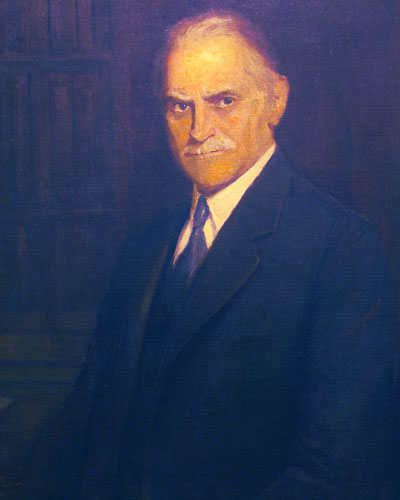 Oscar John Snyder was the college’s first president. He remained with PCOM for 42 years as an adviser and member of the Board of Trustees.

Dr. Snyder was instrumental in obtaining the Commonwealth’s legal recognition of the College and the osteopathic profession through establishing the high standards of osteopathic medical education.

The Board of Trustees and its Chairmen directed the College during these years of growth.

After many prosperous years on Pine Street, PCIO bought its first building at 19th and Spring Garden streets in 1916. The College, officially renamed Philadelphia College of Osteopathy (PCO) in 1921, added a new hospital to the rear and acquired two adjacent townhouses—one for additional classrooms and clinics, the other for a nurses’ home.

The 1930s were a time when the curriculum expanded, pre-osteopathic and graduate schools started and PCO created the profession’s first Department of Osteopathic Research. It was also a time when the clinics, known for their “booth doctors,” played an increasingly important role in providing health care to the community.

During the war years, PCO accelerated the curriculum from four years to three, then welcomed many returning GIs into the classes of the late 1940s and 1950s. Medicine was becoming more specialized and complex, increasing the need for clinical training.

The school would have its second president beginning in 1953. 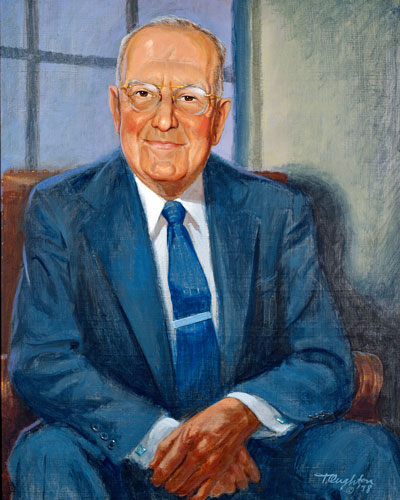 In June 1952, William E. Brandt, DO chiefly known for his sports writing, radio broadcasting and work as public relations director for the National Baseball League, was appointed acting president of the College.

When the reorganization was finalized on July 27, 1953, Brandt became the institution's first president since Oscar John Snyder, a position he held until 1957. 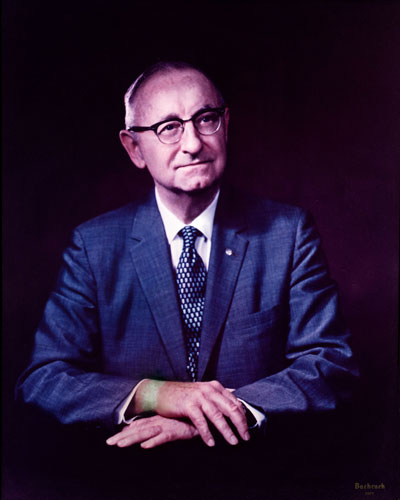 Frederic H. Barth led PCO from 48th Street to City Avenue, began his service to the institution in 1949 as a member of the Hospital board of directors and the College board of trustees. By the year's end, he became president of both boards. Barth was a driving force behind the amalgamation of the two entities into a single Pennsylvania corporation.

Through Barth's leadership, PCO purchased the Moss estate on City Avenue for a new college and hospital complex, and for the first time in its history, PCO received financial assistance from the state legislature to make that construction possible. 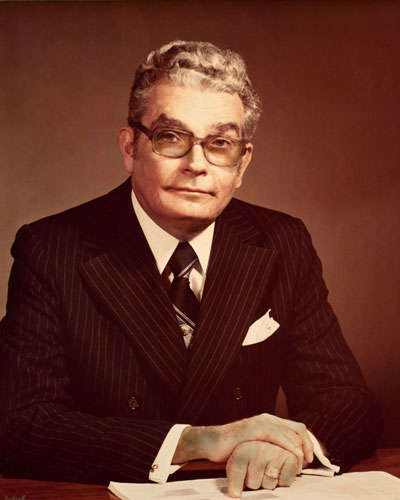 Thomas M. Rowland, Jr. devoted 34 years of his life to PCOM, distinguishing himself as a leader, an educator and a friend to students, alumni, faculty and employees. Rowland was a World War II veteran (an experience he shared with many students and alumni) and a graduate of Temple University with postgraduate studies in public administration.

He began his career at PCO in 1950 as assistant registrar and soon advanced to registrar and director of admissions, introducing more than 2,000 students to the osteopathic profession. The Class of 1954 awarded Rowland an honorary DO degree. Between 1959 and 1973, he rose through the ranks from President Barth's administrative assistant to executive vice president. From 1973 until his death in 1984, Rowland served as PCOM's fourth president. President Rowland led the development of PCOM into the Osteopathic Medical Center of Philadelphia. 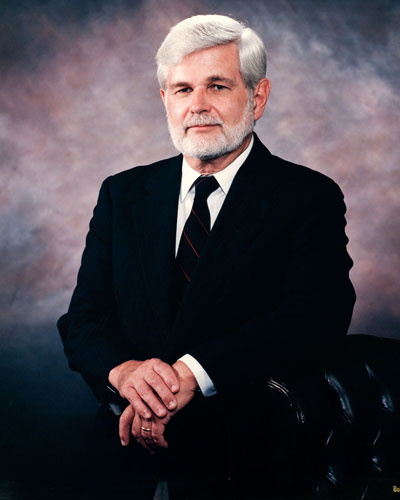 J. Peter Tilley was selected as PCOM's sixth president on November 12, 1984. Due to the College's financial problems during his tenure, Tilley proposed selling Barth Pavilion in 1989.

But to many of the staff, faculty and alumni whose lives had revolved around the osteopathic hospital, located at City Avenue, 48th Street or Spring Garden Street, selling the facility was not a viable option. Factions developed over this issue, which ultimately contributed to Tilley's resignation.

Tilley resigned at a board of trustees meeting on March 9, 1990. Several members of the board resigned at this time as well. 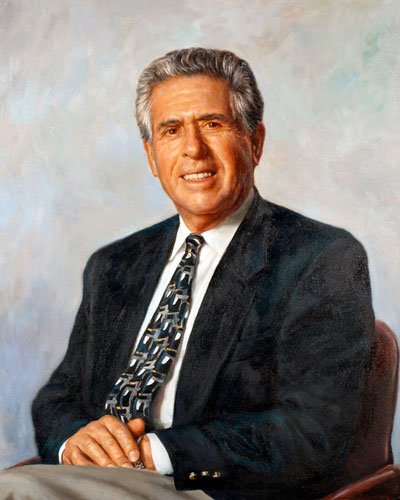 Leonard H. Finkelstein, DO, has played an important role in shaping PCOM as an educator, a clinician and from 1990-2000, as the College's sixth president. He received his DO degree in 1959 and after an internship and general surgery residency at Zieger Osteopathic Hospital in Detroit, returned to his alma mater in 1961 for a residency in urologic surgery.

Finkelstein officially joined the College faculty in 1970 as chairman of the Division of Urology. Before stepping down from this post in 1993 to focus on his responsibilities as PCOM's president, he developed an outstanding urology residency program.

Finkelstein is a preeminent urologic surgeon, trained in a PCOM tradition begun by H. Willard Sterrett, DO (1917), in the 1940s, yet focused on cutting-edge ideas and technologies such as laser surgery, which he introduced to PCOM's Division of Urology in the early 1980s. As a pioneering researcher in urology in the osteopathic profession, he has lectured and published extensively. In October 1984 Finkelstein became the first DO urologist to publish in the Surgical Clinics of North America, and the first DO not affiliated with an allopathic institution to publish in The American Journal of Surgery.

As president, Finkelstein has steered PCOM through times that threatened the very survival of the institution. He was responsible for the ultimate sale of Barth Pavilion in 1993 that saved the College from bankruptcy, the rejuvenation and expansion of the student body and campus, and the rebuilding of the College's financial foundation through a $25 million capital campaign. 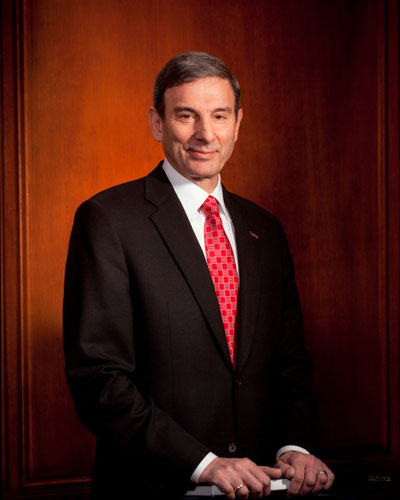 Matthew Schure, PhD, was president and chief executive officer at Philadelphia College of Osteopathic Medicine from 2000-2014. He was responsible for translating the College’s strategic vision into related business, personnel, facilities, technology, development, communication and organization plans. Dr. Schure was past chairman of the American Osteopathic Association Council on Pre-doctoral Education.

He previously held many senior-level professional appointments including chairman of the board of governors of the American Association of Colleges of Osteopathic Medicine. He served on the Pennsylvania Workforce Investment Board and the Board of the Association of Independent Colleges & Universities of Pennsylvania, the Life Science Career Alliance, and the City Avenue Special Services District. Prior to joining PCOM, Dr. Schure spent three decades at New York Institute of Technology where he held numerous senior level positions including president and chief executive officer. Dr. Schure holds a doctoral degree, a master of philosophy degree, and a master of arts degree in educational psychology from Columbia University. His bachelor’s degree is in psychology from Queens College.