Inauguration of the Eighth President Jay S. Feldstein, DO ’81 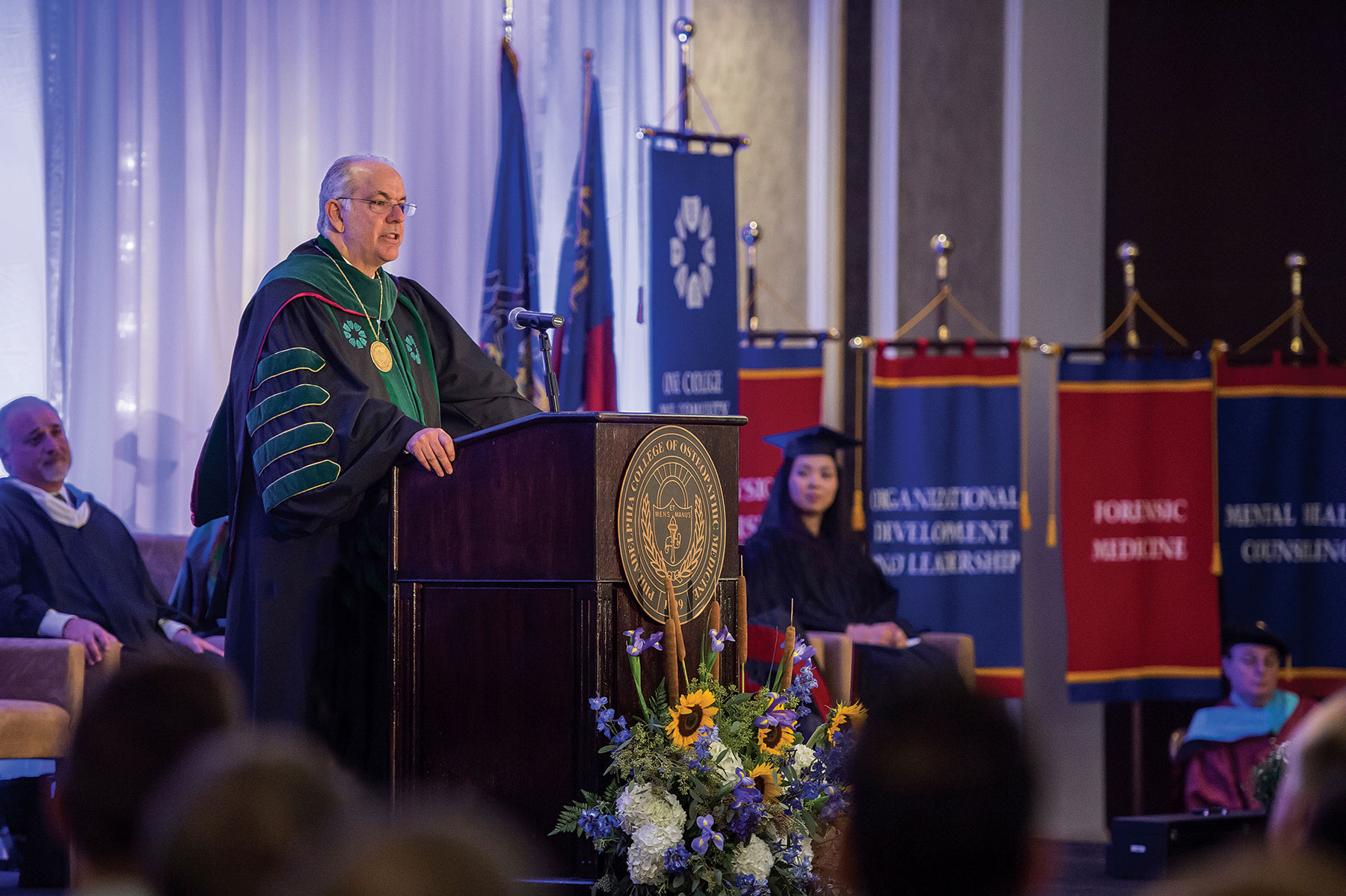 Inaugural events for Jay S. Feldstein, DO ’81, proffered the Philadelphia College of Osteopathic Medicine community the opportunity to officially welcome the institution’s eighth president, marking at the same time, the College’s osteopathic tradition and 116-year history of academic excellence. A formal installation ceremony officiated by Thomas J. Gravina, vice chairman, PCOM Boards of Trustees, and chair, PCOM Presidential Search Committee, with John P. Kearney, chairman, PCOM Boards of Trustees, was held on September 17 at Hilton Philadelphia City Avenue. The ceremony included an academic procession, greetings from College representatives and shared citations from key dignitaries, and engagement of the office and presentation of presidential symbols. It was followed by receptions for various internal and external constituencies. In October, additional celebrations were held on Georgia Campus – PCOM and at the 1818 Club, Duluth, Georgia. And students from both campuses participated in service activities in honor of Inauguration—reinforcing the larger community’s sense of solidarity and dedication to public service.

The theme of the Inauguration—One College, One Community, One Vision—was inspired by PCOM’s motto, Mens et Manus (translated as “Mind and Hand”), to stress a holistic institutional identity and College community, and to portray strength in a single forward-moving institutional vision that will be carried out under President Feldstein’s leadership.

President Feldstein’s inaugural address recounted the principles upon which PCOM was founded in 1899, what it has become, and what it can become. The latter was underscored by President Feldstein’s commitment to new College initiatives, solidified in PCOM 2020, a strategic plan that aims to propel the institution forward and to further position it as a national leader:

“So how does a College with nearly 3,000 students engaged in the study of various healthcare and behavioral health fields—in two states—move forward? How does it grow and flourish during an especially fluid time in American higher education and during a confounding period of healthcare reform and regulation?

Last fall, I posed these questions to the Philadelphia College of Osteopathic Medicine community when—together—we began our strategic planning process. Over the months that followed—as One College, One Community—we identified institutional aspirations and values that will define One Vision for the next decade and beyond.” [see pages 14-15 for an overview of PCOM 2020]

An alumnus of PCOM, President Feldstein succeeded (July 2014) Matthew Schure, PhD, who served as the College’s president and chief executive officer for more than a decade. Prior to his post at PCOM, President Feldstein served as president, Northern Division, Pennsylvania Managed Care Plans, at AmeriHealth Caritas Family of Companies. He is board certified in emergency medicine and occupational medicine and is a fellow of the American College of Preventive Medicine.