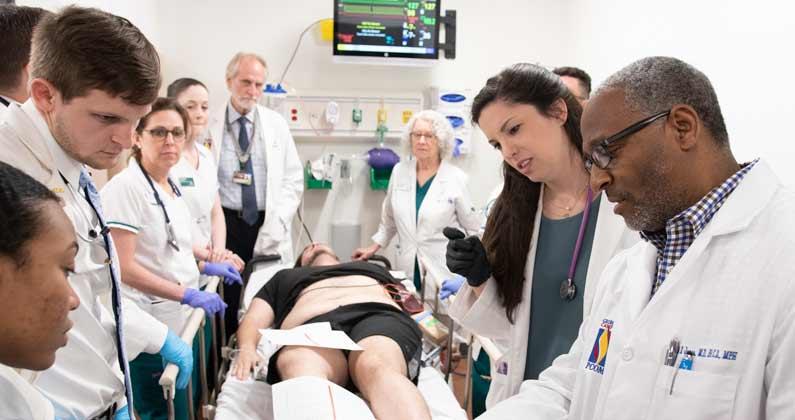 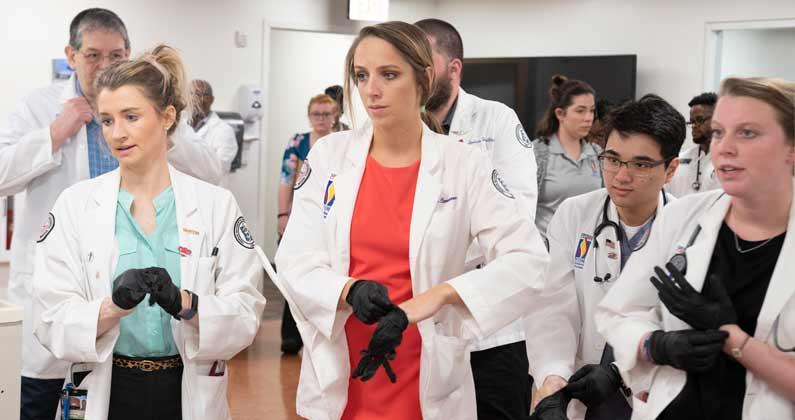 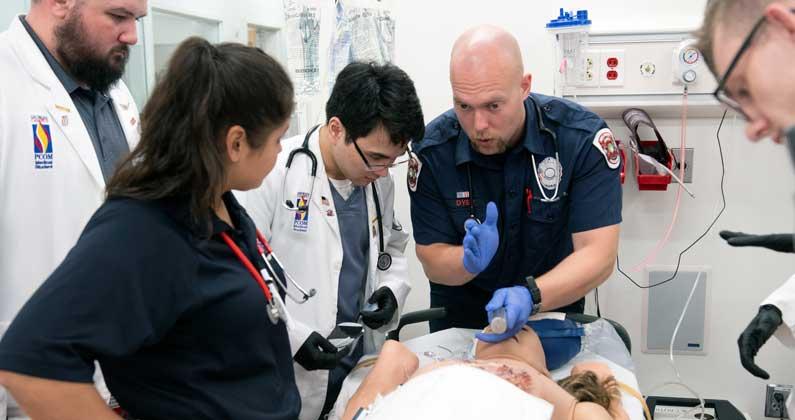 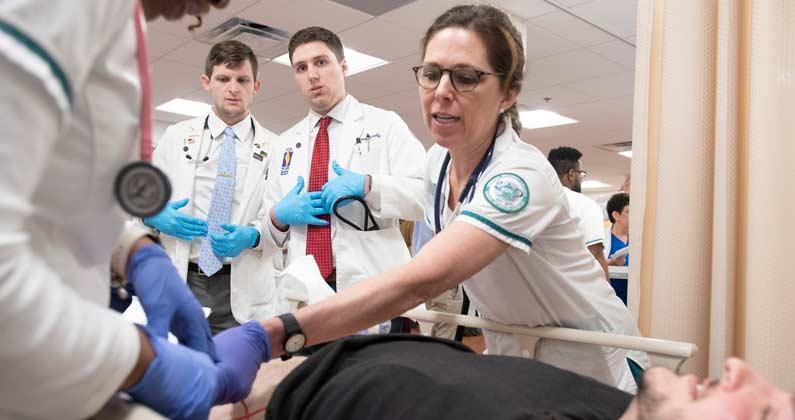 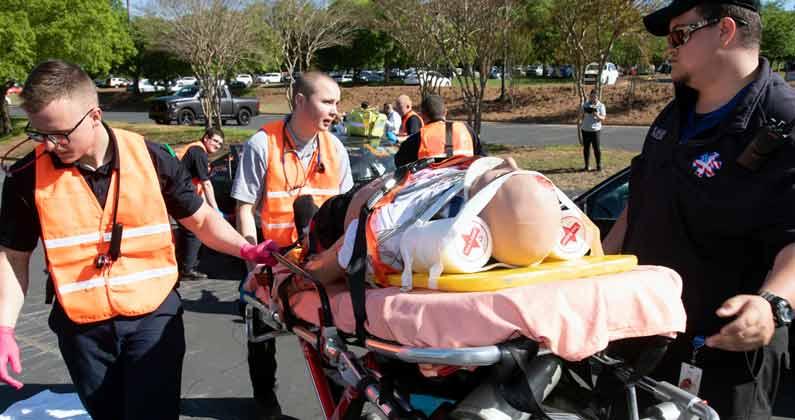 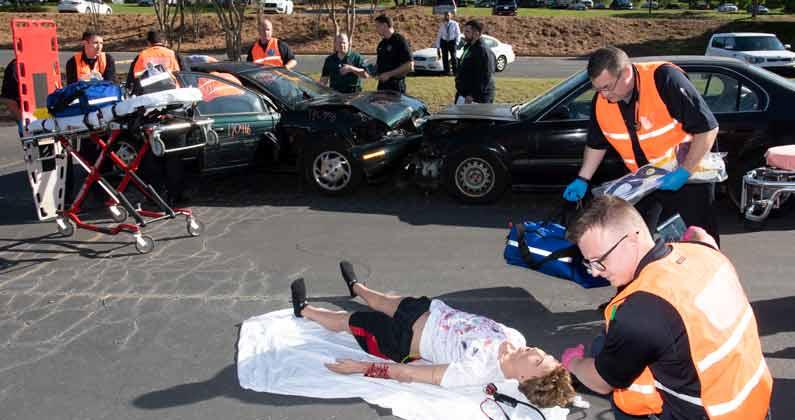 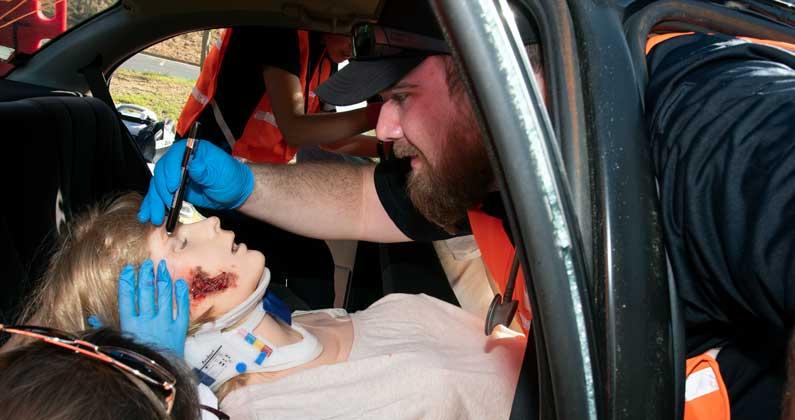 Two cars involved in a head-on collision, one ejected victim lying prostrate on the roadway, a pregnant patient trapped in a vehicle, oxygen administered, sirens screaming, the crunch of metal as the Jaws of Life are activated, patients placed on backboards and transported to the emergency department. One fatality covered by a blanket.

This was one of the ten scenarios facing student healthcare professionals on Tuesday as they participated in PCOM Georgia’s Trauma Day. Student paramedics from Lanier Technical College in Gainesville, student nurses in their fourth year at Georgia Gwinnett College (GGC) in Lawrenceville, and student doctors in their second year at PCOM Georgia in Suwanee experienced what it was like to depend on each other as they worked to save the lives of their patients – from the field to the emergency department.

“We all need to listen, to hear the same story to give the patient the best care possible,” Sharon Grason, PhD, RN, the director of the nursing program at GGC, said.

PCOM Georgia Director of Simulation Jeffery Adams, NREMT-P, MS, urged the students, “When you’re in the emergency department, take two minutes to listen to what the paramedics say.”

Communication was key during the day’s events. Triage nurses took notes as they listened to the emergency medical services radios in the field and readied the department for incoming patients. The handoff between paramedics to nurses to doctors in the emergency department was critical.

“You learn so much from each other,” Grason said.

“You don’t want to play ‘Whisper down the Lane,’” James Hogue, DO, FAAEM, FACEP, clinical assistant professor of emergency medicine at PCOM Georgia, said. “The same story needs to be passed from the paramedics to the nurses to the physicians. If you’re running a code or trauma, everybody contributes and offers information.”

Ryan Cosby (DO ’21), a second year medical student who participated in the simulations said, “We learned teamwork. We were able to see gaps in our knowledge and where strengths lie outside of our discipline.”

Second-year nursing students, along with life-like mannequins, were the patients during the day’s events which also included such cases as a perforated appendix, a myocardial infarction, an infant with sepsis, and a new mom with a stroke. Students were also tasked with identifying a human trafficking case featuring a patient who had overdosed.

The realistic scenarios were designed by students earning the Master of Science degree in Biomedical Sciences with a concentration in Medical Simulation. The cases were overseen by physician faculty members at PCOM Georgia.

Cosby, who earned an MS degree with the Medical Simulation concentration at PCOM Georgia prior to entering medical school, said, “I would encourage those in the healthcare professions to experience simulation training.”

“It’s a great way to get the initial jitters out of the way and get your first hands-on experience without feeling that you’re going to harm someone.”

The staging took place primarily in the Simulation Center at PCOM Georgia, but also in the Gwinnett County Public Schools parking lot and at a local grocery store. North Georgia Medical Transport provided an ambulance for the day’s events.

Grason said, “We guided them in pulling out the knowledge I know they have so they could apply it.”

She added, “There’s a level of apprehension that students have when faced with cases like these. These types of situations give the students confidence so that they are able to deliver care at a higher level.”

Adams said, “There was a lot of really good communication between all levels of care – one of the main focuses of the day.”

Established in 2005, PCOM Georgia is a private, not-for-profit, accredited institute of higher education dedicated to the healthcare professions. The Suwanee, Georgia, campus is affiliated with Philadelphia College of Osteopathic Medicine, a premier osteopathic medical school with a storied history. PCOM Georgia offers doctoral degrees in osteopathic medicine, pharmacy, and physical therapy and graduate degrees in biomedical sciences and physician assistant studies. Emphasizing "a whole person approach to care," PCOM Georgia focuses on educational excellence, interprofessional education and service to the wider community. The campus is also home to the Georgia Osteopathic Care Center, an osteopathic manipulative medicine clinic, which is open to the public by appointment. For more information, visit pcom.edu/georgia or call 678-225-7500.