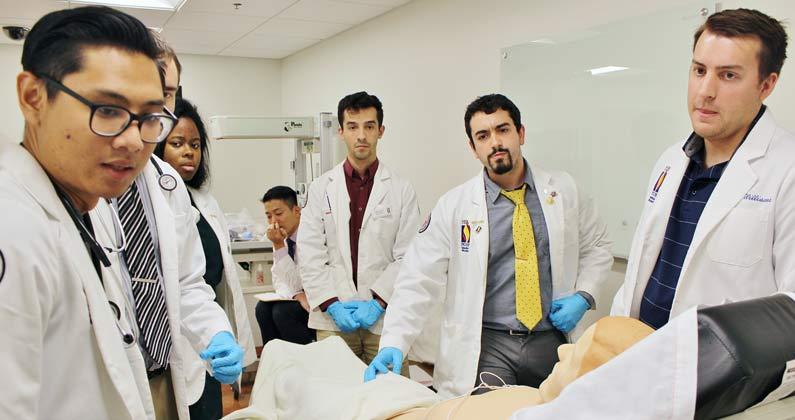 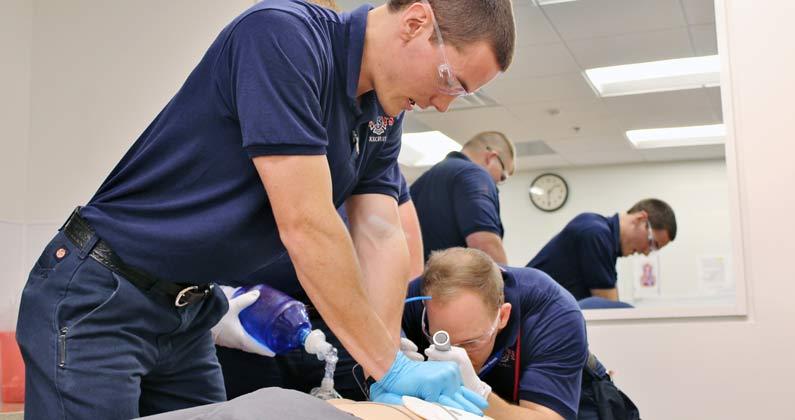 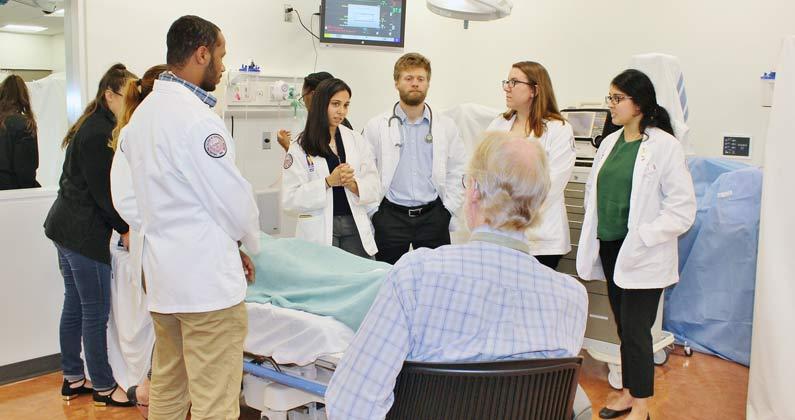 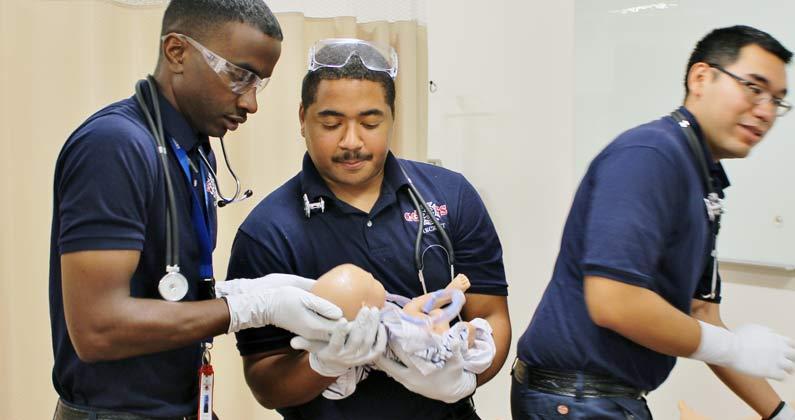 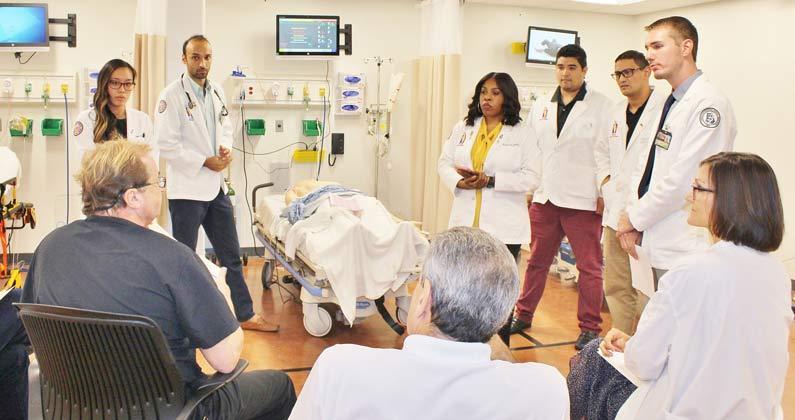 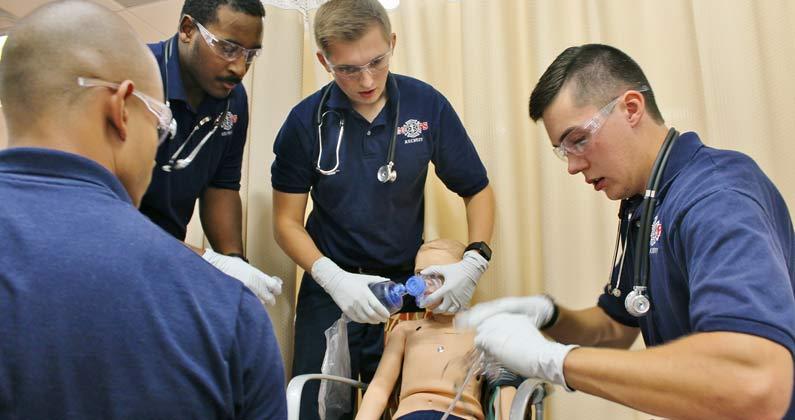 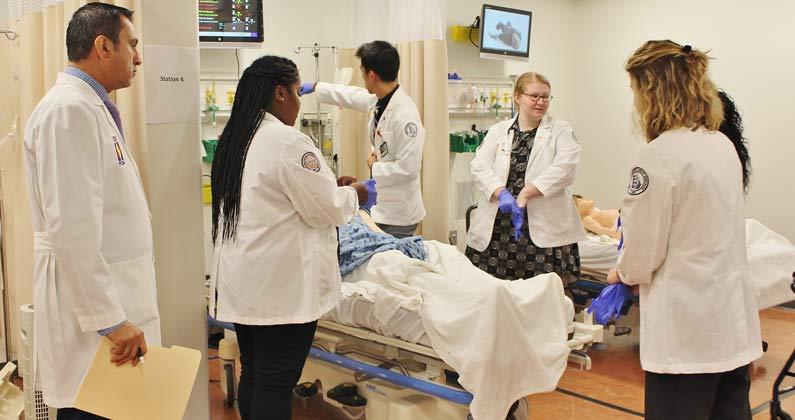 As is often the norm, the Simulation Center at Georgia Campus – Philadelphia College of Osteopathic Medicine (GA-PCOM) was abuzz with activity on Tuesday, September 18, 2018. But this time was different.

Standardized patients, high tech manikins, paramedic, biomedical sciences, osteopathic medicine and pharmacy students were participating in what was billed as a Simulation Marathon in honor of Healthcare Simulation Week. During a ten hour period, 189 students completed 73 simulations featuring ten different scenarios. They practiced concepts such as empathy, teamwork, decision-making and professionalism under the watchful eyes of faculty members.

In addition, the Sim Center challenged other simulation labs and universities across the globe to run as many simulations this week as possible to set a record for the number of students who can be trained in just one week.

The day began at 7:30 a.m. when paramedic students from the Gwinnett Fire Academy participated in scenarios involving patients experiencing everything from a fentanyl patch overdose, to multiple stab wounds, to a dry drowning, to twin births. One scenario involved a patient with sepsis brought on by a urinary tract infection, sometimes a difficult, but important, condition for first responders to recognize.

Lt. Dean Fritz of the Gwinnett County Fire Department said, “The skills training offered at the Sim Center has been very, very useful. It’s been an excellent experience overall for our class of paramedics to be able to interact with the patient actors and the simulation manikins for more hands-on experience.” He said that the participants will graduate from the Gwinnett Fire Academy early next summer.

In the afternoon, DO and pharmacy students, under the guidance of osteopathic medicine and pharmacy faculty members practiced working together in an emergency department setting. “The main point of this exercise was to know your role and work as a team,” said Christopher (Shawn) Holaway, PharmD, assistant professor of pharmacy practice.

According to Director of Simulation, Jeffery Adams, NREMT-P, MS, “The advantages we have in our Simulation Center are state-of-the-art equipment and manpower.” He explained, “We are one of the first centers in the US to purchase the latest pediatric manikin to join our other manikins. Nicknamed Timmy, the manikin’s advanced features allow his eyes to track and his head to move.” Adams noted that each manikin usually costs between $60,000 and $80,000.

GA-PCOM offers a concentration in medical simulation, a track that our biomedical sciences master’s degree students can pursue. This year, 14 students are participating in this concentration. As part of the curriculum, they design and manage scenarios in the Sim Center, while also qualifying to become an EMT. Adams said that students combined ran over 2,000 simulations during the one year concentration last year and are on track to run a similar amount this year.

“We teach them how to work with different disciplines,” Adams said. He noted that some of the master’s students enter professional school with many hours of training under their belts. In addition, he said, two students who graduated from the program last year are now working in simulation centers in hospital and college settings. “We couldn’t run the Sim Center without them,” Adams said.