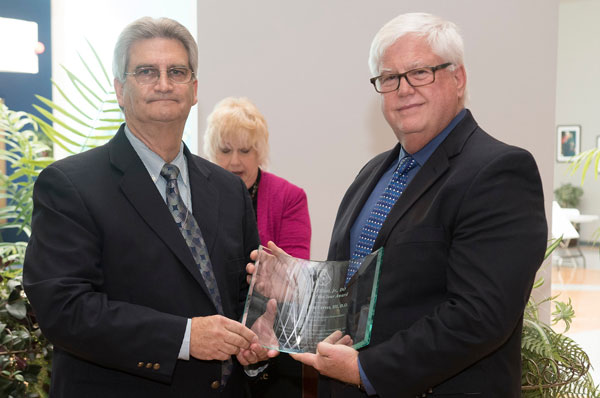 William Sightler, DO, president-elect of GOMA, (left) presented H. William Craver III, DO, (right) with the award during the GOMA Fall Conference.

The award was presented by Karen Turner, DO, president of GOMA, and William Sightler, DO, president-elect of the organization. The glass-etched plaque recognizes Dr. Craver for exemplary service to the osteopathic medical profession, as well as to his patients, community and family.

Named for Lt. Col. Walter B. Elliott, Jr., DO, the award is given each year in memory of Dr. Elliott who was an osteopathic medicine physician and a founder of the former Doctors Hospital in Tucker.

Dr. Craver said, “It is an honor to be recognized by my osteopathic peers in Georgia. It has been a privilege to serve as the dean of GA-PCOM and to be able to help advance osteopathic medicine in our state.”

He added, “There are many folks working hard every day alongside me and it is my pleasure to accept this award for all the members of the team.”

A native of Doylestown, Pennsylvania, Dr. Craver graduated from the University of Delaware where he earned a degree in physical therapy in 1979. After working in physical therapy and sports medicine at the Hershey Medical Center, he enrolled at Philadelphia College of Osteopathic Medicine (PCOM) and earned his DO degree in 1987.

He completed a residency, serving two years as chief resident, in general surgery at the Osteopathic Medical Center of Philadelphia in 1992. He then joined the teaching faculty and was the academic coordinator of the Surgery Residency Program. He has also practiced in the communities of Jasper, Georgia, and Hardinsburg, Kentucky.

Dr. Craver is board certified by the American Osteopathic Board of Surgery and is a fellow of the American College of Osteopathic Surgeons. He is a professor of surgery, as well as a Costin Scholar. He has received numerous awards including induction into the Phi Kappa Phi Honor Society, the Galen S. Young Surgery Award from PCOM, Resident of the Year, National Board of Osteopathic Medical Examiners (NBOME) Case Author of the Year, PCOM Alumni Association Certificate of Merit and Certificate of Honor. In addition, he is a member of the American Osteopathic Association (AOA) Mentor Hall of Fame and a Guardian of the Profession.

Dr. Craver is actively involved in several organizations serving and/or representing osteopathic medicine including the Residency Evaluation and Standards Committee for the American College of Osteopathic Surgeons, the Council on Osteopathic Postdoctoral Training for the American Association of Colleges of Osteopathic Medicine (AACOM), a Delegate to the AOA, the Board of Directors for Three Rivers Area Health Education Center (AHEC), and the GME Regents Evaluation and Assessment Team.

In addition, he serves on the Medical Education Advisory Committee for the Georgia Board for Physician Workforce, the Council on Legislation for the Medical Association of Georgia, the Portfolio and Expanded Assessment Task Force for the NBOME, and the Primary Care Work Group for the Georgia Statewide AHEC Network. Dr. Craver is a member of the Executive Committee of the Board of Deans for the AACOM and a member of PCOM's executive leadership.