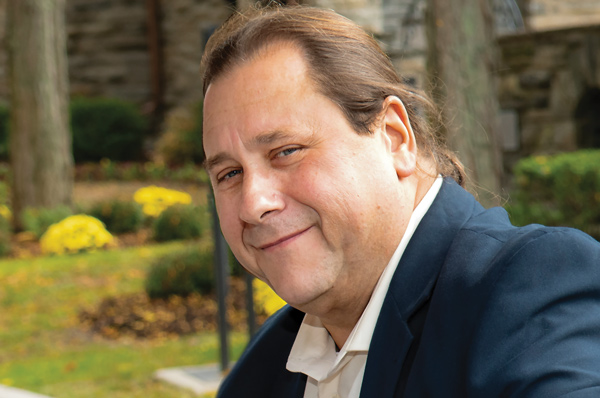 He was the smartest and the nicest guy in the room. He was also a bit of a Big Deal. You’d never know it, though, because David Festinger, PhD, would make such a big deal out of you that you’d almost forget he was a renowned clinical psychologist who’d won multiple opioid addiction research grants and published paper after paper.

That will be Dr. Festinger’s enduring legacy. Not his genius or his grants, but how he made his friends, family, colleagues and students feel that they were the best and the brightest.

Dr. Festinger, a professor in the Department of Clinical Psychology and director of Substance Abuse Research and Education at PCOM, passed away suddenly at age 58 on November 9, 2021. Only now will the man who measured his own success not by his lengthy list of awards and accomplishments, but by others’ happiness, bask in the spotlight he did his best to avoid during a storybook career.

“David was exceptionally humble. He was one of those rare geniuses who was also just an incredible person,” says Michelle R. Lent, PhD, clinical psychologist and associate professor, PCOM School of Professional and Applied Psychology. “David was by far one of the most special people I’ve ever encountered. He was universally liked and admired.”

In the four years that Dr. Lent worked alongside Dr. Festinger, they were awarded five grants together, including PCOM’s largest-ever research funding award—a $5.5 million contract in 2019 from the Patient-Centered Outcomes Research Institute (PCORI) to study the effectiveness of psychosocial treatments for individuals receiving medication-assisted treatment for opioid use disorder.

“Most people get one big grant in their lives,” says Dr. Lent. “David came to PCOM with multiple grants from NIH [National Institutes of Health], which is more than an entire department would have in a decade.”

Even Dr. Festinger, the study’s principal investigator, could hardly contain his excitement over the PCORI grant. “He was so happy and excited to be able to build this program at PCOM. But he shared everything. Whatever he earned, he didn’t consider it his, he considered it everybody’s,” says Dr. Lent.

At a meeting at a research institute in Washington, DC, Dr. Festinger was smitten by the branded coffee mugs being given away. In plain sight of all, Dr. Festinger stowed as many mugs as would fit into his luggage so that he could distribute one to each member of the research team back at PCOM.

“That was David,” says Dr. Lent. “It was hilarious. He’s so charming and lovable, almost innocent in wanting to take extra mugs home because he was so proud of the fact that we had gotten this grant. David was so good-natured that it didn’t matter to anyone that he was taking the mugs.”

Then there was the ceremony marking his induction as a fellow in The College of Physicians in Philadelphia. As is customary for new inductees, Dr. Festinger got to inscribe his name in a centuries-old book that lists some of the founders of medicine, including Benjamin Rush, a signer of the Declaration of Independence and arguably the most famous doctor in America. Rather than boast about adding his name to the many famous signatures, Dr. Festinger texted a picture of his friend’s signature in the book, which in his estimation was more noteworthy than his own signature.

“He was more excited that he saw my name there than his. That was the way he was. Humility is probably the defining element of Dave,” says his longtime friend and colleague Doug Marlowe, JD, PhD, chief of science, law and policy for the National Association of Drug Court Professionals, who co-authored several research studies with Dr. Festinger on drug offenders.

It’s little surprise that Dr. Festinger’s research centered on treating those suffering from drug addiction fairly and humanely. He believed that treating addiction punitively and fighting the war on drugs with incarceration was fundamentally wrong.

“This research involves real pragmatic work on the ground, testing different approaches to treating patients with opioid use disorder and to helping people meet their recovery goals,” says Dr. Lent. “He was ahead of his time. Not every treatment works for every person.”

“David’s built quite the empire here,” says Dr. Lent. “I’m taking this leap of faith. I think that I have to. I feel really committed to continuing David’s legacy and what he built here. He trained me well.”

Some in academia measure greatness by how much grant money they’ve been awarded. Not Dr. Festinger. Even though he had “perfected his ability to win grants,” as Dr. Marlowe puts it, Dr. Festinger was “not interested in getting grants for the sake of getting grants. Research is a means to an end. It’s not the end. You get the money so you can do the research. So many get the grant in order to get the next grant.”

Robert DiTomasso, PhD, ABPP, dean, PCOM School of Professional and Applied Psychology, described Dr. Festinger as a “kind, gentle, and sweet person who was a devoted mentor to his students and a collaborative and cherished colleague.”

A fellow of the American Psychological Association (APA), Dr. Festinger also was a past president (2017) of APA’s Division 28 (Substance Abuse and Psychopharmacology).

Dr. Festinger served as principal or co-investigator on more than 20 NIH-funded grants and numerous contracts and grants from other federal, state and local funding agencies. He authored more than 70 articles and chapters and disseminated his research findings at conferences and scientific meetings across the United States and abroad. In addition, he served as one of the principal architects of several evidence-based helping tools for clients and stakeholders within the fields of substance abuse and criminal justice.

Service to others above all else

The PCOM Department of Psychology compiled a book of memories and sentiments for Dr. Festinger’s family from faculty, staff and students.

In one, a student writes, “Dr. Festinger showed me everything that one dreams of in a mentor. He was a kind, patient, thoughtful, unassuming, funny and brilliant man.”

Then this from a colleague: “David was one of the gentlest, kindest souls you would ever meet, with equal measures of intelligence, caring and humility and a dedication to teaching and mentorship that made him beloved among his students.”

Another colleague writes: “He was the humblest person anyone could meet. He never delighted in praise or recognition; he aimed to please and serve others, and that was enough for him. And yet, when I hear all of the accolades about his professional life, while it is incredible and amazing, that is not what defined him.”

“It was so easy to be friends with David,” she says.

People won’t remember you for what you did, but rather for how you made them feel when in your presence. And when you were in David Festinger’s company, he’d duck into the shadows so you were made to feel you were the only person that mattered.

Gifts in Memory of Dr. Festinger

The Dr. David S. Festinger Memorial Research Fund has been created in his honor. To contribute, visit PCOM Alumni Giving, check the “Other” box, and then type in the fund name.