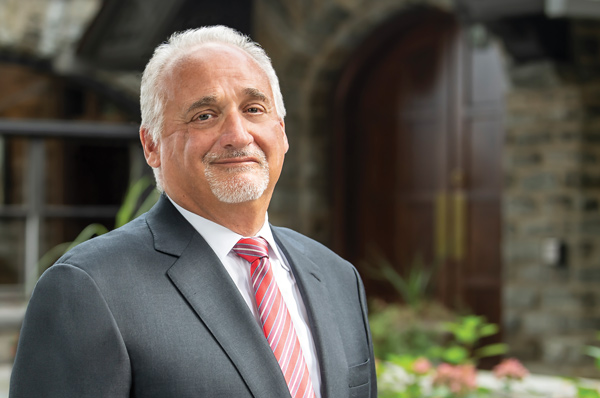 Thomas J. Gravina was elected chairman of the Philadelphia College of Osteopathic Medicine (PCOM) Board of Trustees on November 10, 2021, the fourth Board chair in the institution’s history to serve in this singular role. He succeeds John P. Kearney, who announced plans for his retirement in May 2021.

Mr. Gravina joined the PCOM Board of Trustees in 2003, at the invitation of the late Herbert Lotman, LLD (Hon.), former chairman of the Board and a mentor and friend. Mr. Gravina has served as vice chairman since 2015, overseeing the Board’s Foundation Committee and sitting on the Audit, Compensation, Executive, and Finance committees. His service to PCOM has included chairmanship—from 2005 to 2011—of the College’s Golf Classic, benefiting the PCOM Healthcare Centers. Mr. Gravina also led the College’s Presidential Search Committee in 2014. He was the recipient of the PCOM President’s Leadership Award in 2010.

Mr. Gravina presently serves as executive chairman of Evolve IP, a company he co-founded in 2006. Evolve IP is a cloud technology company, serving commercial clients in the United States and around the world. He is also executive chairman of GPX Enterprises, a private investment company he co-founded in 2007, with interests in real estate, manufacturing, software, consumer health, cloud technology and financial services.

From 2009 to 2018, Mr. Gravina was a member of the board of directors of FS Investment Corporation, a NYSE-listed business development company. He has also served on the boards of the FS Energy and Power Fund and the FS Global Credit Opportunities Fund.

Mr. Gravina holds a bachelor’s degree in business administration from Villanova University. He serves on the university’s President’s Leadership Committee and is a member of the 1842 Heritage Society. He is a recipient of the Villanova University Joe Walters Special Recognition Award (2018).

Mr. Gravina resides in Haverford, Pennsylvania, with his wife Tracey and their three children.
In the interview excerpts that follow, Thomas J. Gravina, chairman, PCOM Board of Trustees, shares his personal connection and longtime service to the College; his leadership and philanthropic commitment; and the importance of growing and evolving the institution.

“My father passed away when I was eight years old,” recalls Mr. Gravina. “The night he passed, I remember Herb [Herbert Lotman, LLD (Hon.)] and his wife Karen came to our home. My mother knew the Lotmans for many years, as she taught the Lotman children—and later, grandchildren—vocal and drama lessons [she held a master’s degree from the Royal Schools of Music in London]. Herb and Karen wanted to help our family during our time of need and to guide me and my siblings as best they could.

“When I was a young boy, Herb would take me out to eat. We would talk about school, sports. He was always a positive and influential part of my life. My family’s friendship with the Lotmans has lasted well over 50 years.”

Mr. Lotman, who served on the PCOM Board of Trustees from 1990 to 2014, and chaired the Board from 1992 to 2004, often noted that his service at the College was one of the greatest honors of his life—and he wanted the same experience for his mentee. He would be the one to introduce Mr. Gravina to PCOM and urge him to become a Board member in 2003.

“I did not know anything about PCOM, but I could not say no to Herb,” says Mr. Gravina. “No one ever could.

“Herb was an extraordinary human being. He spent a good part of his life doing good deeds for people—often anonymously. While he would introduce himself as ‘just a butcher,’ his company, Keystone Food Corporation, became the largest privately held meat-products company in the United States. And as if that wasn’t remarkable enough, he used his business as a platform to do tremendous philanthropic things. His community involvement and philanthropy has touched countless people around the world.”

During his tenure at PCOM, Mr. Lotman rejuvenated the institution and secured its future. “He literally saved the College,” says Mr. Gravina. “He made it one of the most financially sound institutions in academia.

“It will be my privilege to now take the legacy of Herb and many others forward.”

The Harvard of Osteopathic Medicine

“Across higher education—especially healthcare education—competition is vastly increasing. There is immense competition for the best and brightest students, for preeminent faculty and staff, for clinical training, for research funding, etc. There are great challenges.

“My vision is to grow the institution, capitalizing on the College’s strengths: its history, its tradition of academic excellence, its unique resources. I want PCOM to expand its reach in as many ways as we can successfully. I want us to be considered the Harvard of osteopathic medicine.

“I believe we must look toward the future and make the best possible decisions in the best interests of all of our constituents. Like the College’s founders, we must be innovators and, at times, risk-takers. We must adapt to succeed—always striving to find new ways to deliver on our mission. Those institutions that are agile will be the most successful.

“I’ve been on the PCOM Board for a long time. PCOM is a remarkable institution. We have nearly 18,000 alumni across the world and over 3,000 students in our health programs. I want them to know that they are our legacy. They are our strength. In my new post as chairman, I plan to work closely with the PCOM Alumni Association and the PCOM Student Government Association. I want to give more visibility to the people of the College; they are the PCOM story. They move us into the future.

“I will also work in collaboration with Jay Feldstein, DO, and his Cabinet to support the strategic direction for the College.”

Describe Yourself in Three Words …

He is conscious of the Augustinian values imparted during his days at Villanova University. “I do my best to understand the suffering around the world, and I try to live in the context of what that means.”

With his wife of 28 years, Mr. Gravina supports several charitable organizations through the Thomas and Tracey Gravina Family Foundation. The foundation was formed to provide basic human services such as food and shelter, youth development, education, wellness, and community building across the United States.

At the same time, the Gravinas have raised their children to be socially conscious young adults, while instilling in them a philanthropic spirit. Thomas Gravina Jr. is a 2020 graduate of Villanova University, and twins Giovanna and Parker are seniors at the University of Pennsylvania and Wake Forest University, respectively. All serve their communities and have active roles in the foundation.

Lessons from the Bunker

Mr. Gravina has long combined his enthusiasm for golf with his avid support of PCOM’s Healthcare Centers. For six years—from 2005 to 2011—he headed the College’s Golf Classic, which grossed in total over $1,132,000. These funds directly supported physical infrastructure and medical services at the clinics.

“The Golf Classic attracted philanthropic support and brought many prominent community members onto the greens to focus attention on the PCOM Healthcare Centers and their critical significance to the communities they serve,” says Mr. Gravina. “It is so important to invest in efforts that support and advance holistic health and well-being.”

For Mr. Gravina, golf is analogous to life; it is the follow-through that matters.

He offers the following: “In golf, you are out there on your own. You drive your own success. There is only so much someone with raw talent can accomplish. It is up to you and the effort you put into it. Hard work is key.

“Golf also teaches the prospect of improvement. Shots often have to be taken from poor locations. Golfers must accept the situation, strategize and enhance their position as best they can.”