The recipient of the O.J. Snyder Memorial Award reflects on his late son, his PCOM family and the College's solid financial position. 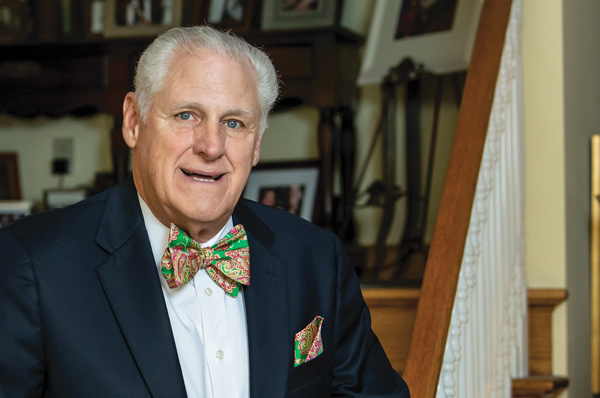 John P. Kearney’s ties to Philadelphia College of Osteopathic Medicine (PCOM) date back to the late 1990s, when his eldest son, JD, was enrolled as a student. While JD’s dream was to become an osteopathic physician, his life was tragically taken in 1999 during a sightseeing trip in Oak Creek Canyon, Arizona. JD lost his footing as he clambered down a cliff to help a fellow classmate who had stumbled. His friend miraculously survived the incident, but JD died of a head injury sustained in the fall.

The death of Mr. Kearney’s son immediately brought out the best in PCOM as the College community rallied around the Kearney family in their profound sorrow. The Kearneys responded in kind, devoting themselves to honoring their son’s memory by establishing a scholarship program. And Mr. Kearney would later join the PCOM Board of Trustees (2002), selflessly serving at the helm from 2014 until his retirement in 2021.

“Right from the start, PCOM was family,” says Mr. Kearney. “Family provides a safe place, a source of strength, stability, togetherness. It is the same with PCOM. The College has been and always will be family.”

This April, when the College observes Founders’ Day, Mr. Kearney will be presented with the O.J. Snyder Memorial Award, PCOM’s most prestigious recognition given to those who exemplify the College’s highest ideals. He will accept the award knowing that under his careful watch, the College has grown in both scope and size, while sound fiscal management practices have delivered a double dose of good news—the College has been able to temper tuition increases while doubling its endowment.

“PCOM made some good, solid investments,” says Mr. Kearney. “In my life, money talks. It can open the doors to quite a bit of discussion and opportunity.”

Mr. Kearney also maintains two scholarships that he and his late wife, Lois, established in honor of JD.

The PCOM scholarship began with a fundraising event held at the Masters Tournament in Augusta, Georgia, during which the Kearneys raised $50,000. Subsequent scholarships have come from an endowment set up by the family.

“Both of the scholarships are based on merit, and mirror what JD received,” says Mr. Kearney. “They go to the best of the best in the classes.”

Not long after Mr. Kearney’s successful fundraising event in Augusta, Herbert Lotman—the late food-industry pioneer, philanthropist, and former PCOM Board of Trustees chairman—set up a meeting with Mr. Kearney at a country club in Quakertown, Pennsylvania. Mr. Lotman wanted to know whether Mr. Kearney was interested in deepening his involvement at PCOM. Mr. Kearney wasn’t so sure, living about 120 miles away in Scranton.

“I told Herb that all my strength was in Scranton,” recalls Mr. Kearney. “I had no power in Philadelphia.”

But Mr. Lotman told Mr. Kearney he liked his ZIP code. It turned out that Mr. Lotman grew up in the same vicinity and began his own business in northeastern Pennsylvania, a company that he grew into one of the world’s biggest suppliers of chicken and beef.

For many years, Mr. Kearney and his wife helped recruit PCOM students from northeastern Pennsylvania, sponsoring receptions for prospective students that drew as many as 150, with PCOM faculty and administrators driving up to meet and greet the aspiring osteopathic physicians.

“It was a way to develop our kids’ dreams and aspirations,” says Mr. Kearney. “Our major goal was to get people from northeastern Pennsylvania involved with PCOM.”

When Mr. Kearney took on the PCOM chairmanship, he had just retired from his construction company in the Scranton suburb of Moosic, a venture he started at the age of 20. It was a business that grew to include ERICO Corp., John P. Kearney Associates, M&K Leasing, MCK Contracting, and Kearney Real Estate. He brought his business savvy to PCOM’s leadership. It’s a philosophy that’s focused on the bottom line, a push for excellence and the need for successful enterprises to grow.

“If you don’t expand, overhead is going to catch up with you,” says Mr. Kearney. “You need to be in the black constantly, never in the red. You never spend a nickel if you don’t have the money to cover it.”

All roads lead back to PCOM

In his retirement, Mr. Kearney is a community-spirited man who goes to Mass at 6:30 a.m. daily, and often decamps after the service at a local breakfast spot where he and his friends discuss the problems of the world—be they local, state or international. While he continues on the PCOM Board as vice chairman (through 2022), he also finds time to serve on 12 other boards, including Trout Unlimited, the International Recreational Fishermen’s Association and several nonprofits that provide human services in the Scranton area and across the Commonwealth.

He has received numerous awards for his dedication to the community, including the Four Chaplains Bronze Medallion, an award recognizing extraordinary contributions to the well-being of others. And at PCOM, he is a recipient of the President’s Award (2010) and the Alumni Association Certificate of Honor (2014).

Mr. Kearney’s wife and beloved companion, Lois, passed away in 2017. He credits her with the ideas for the scholarships and prospective student receptions.

The couple traveled the world, ever seeking new destinations. They relished time with their children and grandchildren. This past fall, Mr. Kearney bought an RV, which he drove across the continental United States with his loyal companion, an Australian Labradoodle named Reba, to visit his youngest son and his wife.

At 73, Mr. Kearney says more travels are on the horizon. He just bought an upgraded RV. He’s planning to drive south, taking time to stop in as many as 10 states. He’ll visit his daughter in Fort Worth, Texas, then head west for Sedona, Arizona, where he will again visit the site of JD’s death.

Then it will be back to Pennsylvania, and to his work at PCOM.

“It’s a way of life,” says Mr. Kearney. “I don’t see myself without my PCOM family in my future.”

Kearney’s tenure as board chairman marked by robust expansion

John P. Kearney’s tenure as chairman of the PCOM Board of Trustees from 2014 to 2021 was a time of ambitious academic and facility expansion, bullish endowment growth and moderate increases in medical student tuition, tempered by a 44 percent growth in scholarship aid.

Over those seven years:

Mr. Kearney says he learned from his more than four decades in construction, real estate and leasing that growth was essential for healthy enterprises. So was consideration for those served—the students. “Early during my time at PCOM, I can remember going back and forth with a trustee who said that every penny we saved can be used to reduce tuition increases,” says Mr. Kearney. “That stuck in my mind as we moved forward.”

Helping to fuel PCOM’s growth during the period was the opening of PCOM South Georgia. The $30 million campus, located in Colquitt County, welcomed its first class of 59 students in 2019. The campus has since added two more cohorts while supporting the local economy with jobs, human capital reinvestment and community development.

The College addressed its prolonged need for housing resources in 2020-2021. In spring 2021, the College opened Meta Christy House, located adjacent to the PCOM campus. The newly renovated facility includes 224 fully furnished apartments on 12 floors. The location provides students with the opportunity to be part of a rich, inclusive and safe living community.