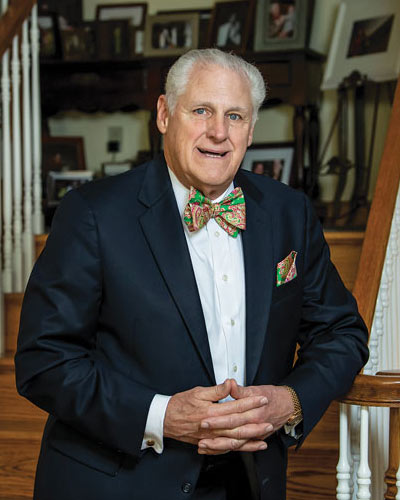 Philadelphia College of Osteopathic Medicine (PCOM) has announced John P. Kearney, vice chairman, PCOM Board of Trustees, as the recipient of the 2022 O.J. Snyder Memorial Medal. The O.J. Snyder Memorial Medal is presented in memory of the co-founder of PCOM and is the College's highest award, which recognizes leadership and service to the osteopathic profession and to the institution. Mr. Kearney will be honored at PCOM’s Founders’ Day celebration on Friday, April 29, at 11 a.m. The ceremony will be streamed live on YouTube.

Mr. Kearney has served on the Board since 2002 and as chairman from 2014-2021, though his connection to the College goes back even further to the 1990s when his eldest son, John “JD” Kearney, was a student in the doctor of osteopathic medicine (DO) program. When JD died in a tragic accident in 1999, Mr. Kearney and his family made a commitment to PCOM that endures to this day in the form of the John D. Kearney Endowed Scholarship. The scholarship is awarded each year to a rising junior who has excelled during their first two years of study. The Kearney’s also established a scholarship at Wilkes University, where JD attended undergrad, for a graduating senior who plans to attend medical school.

Beginning his formal relationship with the College in 2002, Mr. Kearney, a Scranton-area native, joined the Board at the invitation of the late former chairman Herbert Lotman, a food industry entrepreneur and philanthropist. Mr. Kearney was recruited, in part, because he and Lotman both grew up and started their respective businesses in Northeastern Pennsylvania. “I told Herb I’d give it a try,” recalls Mr. Kearney.

Though he retired in 2014 after 38 years as president of ERICO Corp, John P. Kearney Associates Inc. and M&K Leasing Inc., Mr. Kearney continues to operate Kearney Real Estate. He also serves on numerous other boards, including Trout Unlimited, the International Recreational Fishermen’s Association and several human services nonprofits. He has received numerous awards over the years for his dedication to the community, including the Four Chaplains Bronze Medallion, an award recognizing extraordinary contributions to the well-being of others. He is also a previous recipient of the PCOM President’s Award (2010) and the Alumni Association Certificate of Honor (2014).

Reflecting on what lies ahead, Mr. Kearney plans to continue to build on the legacy he has created at PCOM, saying, “I don’t see myself without my PCOM family in my future.”