Philadelphia College of Osteopathic Medicine (PCOM) has a long tradition of leadership and service. This dedication to improving the communities we serve is not only an integral part of our tradition but a central tenet of PCOM’s 2025 Strategic Plan. One strategic initiative states, “PCOM embeds diversity, equity and inclusion in its curriculum, policies, processes and practices to advance student, faculty and staff performance and excellence in service to communities.” Several female student leaders have recently pushed themselves to be a true embodiment of this strategic initiative.

These female student leaders have expanded their reach within national professional organizations to rise to national leadership positions. They have taken the skills and leadership experience they gained while members of their respective organizations at the campus level to the national level. Each of these students has made the conscious choice to extend their educational journey at PCOM beyond the classroom to help inform and influence their respective professional organizations and the communities they serve. 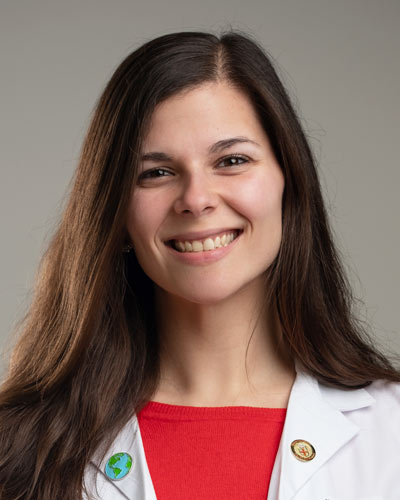 After serving as president of PCOM’s ACOFP during the second half of her first year and into the first half of her second year as a student in the Doctor of Osteopathic Medicine program, Ms. Souza knew that she wanted to continue her journey with the ACOFP, but now on a national scale. After being elected at the organization’s national conference in March, Ms. Souza will serve a year-long term as vice president of the National Student Executive Board, providing student guidance for the ACOFP. Among her many leadership duties in this role, Ms. Souza is responsible for interacting with chapters from across the country to ensure they are successful and coordinating the board’s annual community service project. Ms. Souza shared that her continued involvement with the ACOFP is a way for her to pay forward the mentorship she received from the organization to first and second-year students. 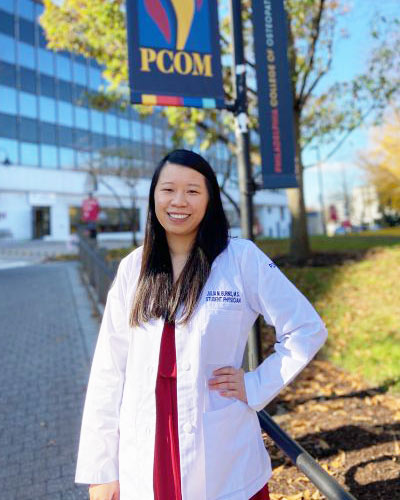 As a dedicated member of PCOM’s AMWA chapter, Ms. Burns served in various roles on campus before transitioning to regional and now national leadership positions. Coming off of a year as the AMWA Region 3 director, serving chapters in Washington DC, Delaware, Maryland, Pennsylvania, Virginia and West Virginia, Ms. Burns has now been named president-elect of the AMWA National Student Division. In this role, she will spend a year shadowing the current president to understand the position, and from there, she will transition to national president. Ms. Burns will sit on the Board of Directors of AMWA and act as a student liaison with the national board. In this role, Ms. Burns will be responsible for interacting with regional chapters and developing programming that aligns with the key initiatives of the organization. 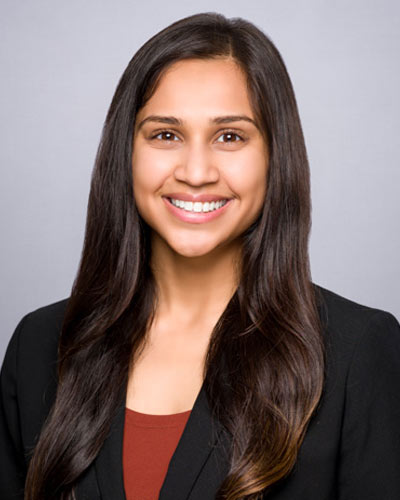 For some, progression in leadership comes naturally. For Ms. Shah, a member of PCOM’s AMWA chapter since her first year as a student in the Doctor of Osteopathic Medicine program, that is certainly the case. Most recently, Ms. Shah served as the Region 4 director for AMWA, covering chapters located in Florida, Georgia, North Caroline and South Carolina. Seeing the need to address vaccine hesitancy in her region, Ms. Shah created a fundraiser that sold pins reading “I’m Vaccinated” to medical professionals, to help start vaccination conversations with their patients. The success of this campaign lent itself to Ms. Shah pursuing leadership further, and she was ultimately named AMWA’s National Student Division Philanthropy Chair. In this role, Ms. Shah will create a national service project for all AMWA leaders and help individual chapters develop service projects. She is also responsible for leading AMWA’s national fundraising efforts. 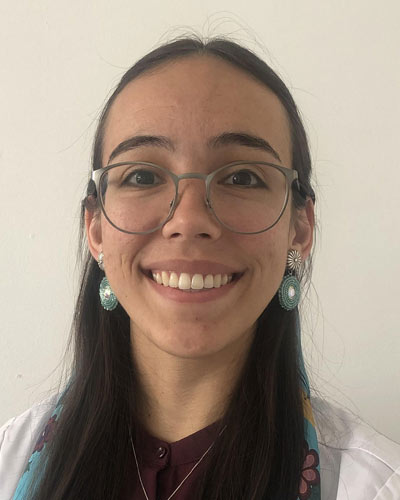 National Chair of DO Outreach

Since joining ANAMS in her first year of medical school, Ms. Klunk felt it was her calling to bring what she learned back to her peers at PCOM. Per AACOM’s annual report of matriculated students by ethnicity, less than 1% of PCOM students in the doctor of osteopathic medicine program (across all three campuses) identify as being of American Indian or Alaska Native descent. Ms. Klunk knew it was critically important for her to serve as an ambassador for the medical needs of Native American patient populations. Ms. Klunk has worked alongside AMWA to raise awareness for culturally competent screening for missing and murdered Indigenous women and girls in the healthcare setting.

In her national role, Ms. Klunk works to increase awareness of the osteopathic profession and make resources available for prospective students. She has also been called upon by AACOM to evaluate a curriculum aimed at improving diversity in colleges of osteopathic medicine. In this role, she helped recruit other Native American DO students to evaluate this curriculum. Ms. Klunk also serves on a subcommittee that works with the Association of American Medical Colleges (AAMC), the National Residency Match Program (NRMP) and the Accreditation Council for Graduate Medical Education (ACGME) to address micro and macro aggressions that Native American students face. 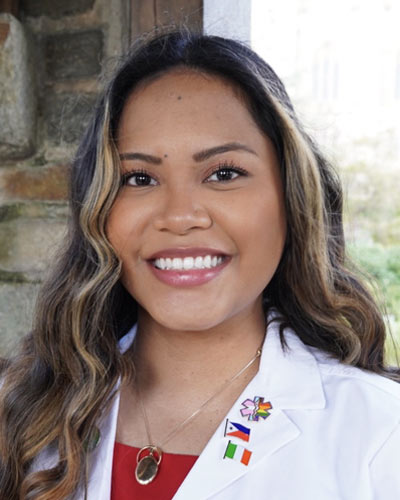 The decision to pursue leadership in a national organization is not one that should be made lightly. The demands of these roles can be very time consuming and for busy medical students, can add tremendous stress to an already-busy schedule. Many students feel a personal calling to pursue these roles. Such is the case with Ms. Villegas. As a student of Southeast Asian heritage, Ms. Villegas has pursued this position in hopes of highlighting the unique health issues that are prevalent throughout the Southeast Asian community. She hopes her voice will make other students and physicians aware of the needs of this population so they are better equipped to provide care. Ms. Villegas will also serve as the diversity, equity and inclusion liaison representing APAMSA for the American Osteopathic Association. 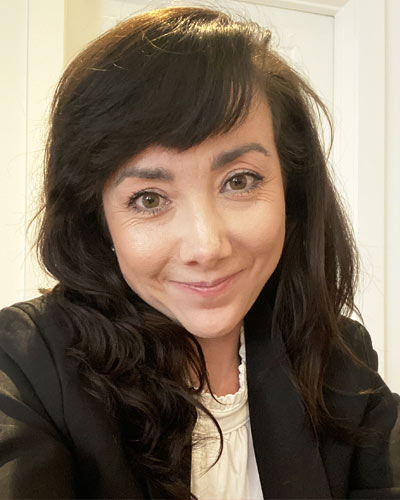 For some students, the decision to pursue leadership comes quite naturally to them. Though only in her second year of medical school, Ms. Krespan has already been elected for two national positions with the AWS. Last year, Ms. Krespan served as the Mid-Atlantic Regional Representative on the AWS National Medical Student Committee. This year, Ms. Krespan will serve as the Marketing and Social Media Coordinator for the committee. In this role, Ms. Krespan will serve as the voice of the committee, sharing news and announcements with a larger audience. 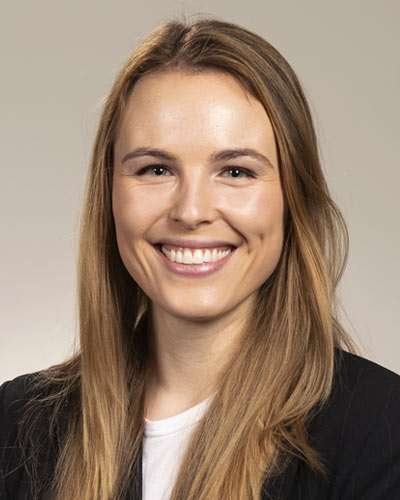 As a student, passionate about pursuing global surgery, Ms. Kersh not only had to seek out opportunities for herself but in the case of the GSSA, she had to pave a path that was not there before. When first elected as the vice president of internal affairs on the GSSA National Team, she was the only osteopathic medical student. Ms. Kersh shared that her goal in joining the GSSA National Team was to change the landscape of global surgery education to include DO students. She wanted other DO students to see that they could be a part of the organization too. Now, after serving for a year on the national team, Ms. Kersh has made such an impact, she has led two symposiums with UCSF and Vanderbilt SOM, and serves as the leader of the Equity Initiative Team. In this role, Ms. Kersh will work to educate students on opportunities within the global surgery field. Along with the members of her national Board, Ms. Kersh will lead national meetings, provide guidance for regional chapters, coordinate and host national conferences and produce the organization’s annual report. Ms. Kersh also served as the president of PCOM’s Global Surgery Club. 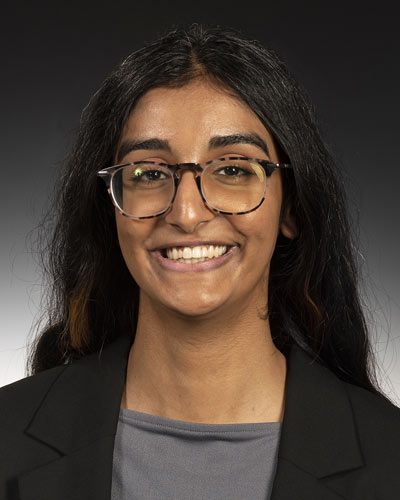 Following the guidance of classmate Lydia Kersh, Ms. Sengha also pursued a national leadership role within the GSSA. Elected in January 2022, Ms. Sengha will hold the vice president of finance position for one year, learning from her predecessor. Ms. Sengha will be tasked with learning the organization's financial requirements, meeting with key donors and promoting the organization’s fundraisers. She will also collaborate with the rest of the board to host a workshop focused on grant writing for students interested in pursuing global research. Ms. Sengha is also a part of PCOM’s Global Surgery Club. 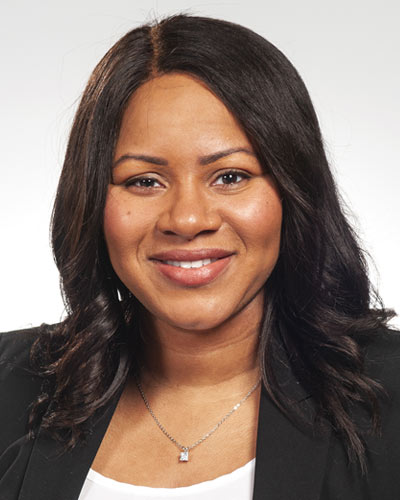 As a long-time leader with SNMA, both at the PCOM level (Ms. Idowu previously served as co-president of the PCOM chapter of SNMA) and the national level (on the Board of Directors), Ms. Idowu is the perfect fit for this position. As the national parliamentarian, Ms. Idowu will call upon her experiences with SNMA to help the organization continue to grow and expand. As a leader throughout the COVID-19 pandemic, Ms. Idowu saw first-hand the flexibility needed to run a large organization. In her new role, she will serve as the right-hand to the chair in conducting the Board of Directors meeting, ensuring that all bylaws are being followed. She is also responsible for updating the bylaws and constitution of the national organization and reviewing all regional bylaws to ensure they are in alignment with those set by the national organization. 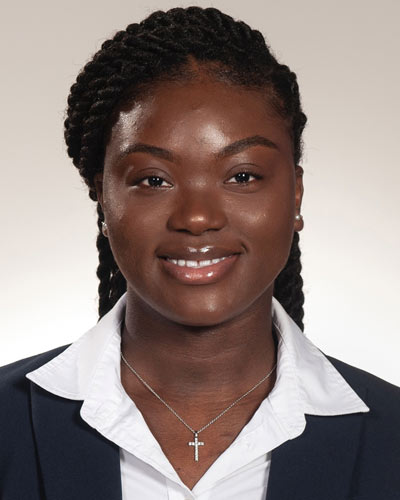