As the war in Afghanistan ended last month, the process of evacuating and resettling thousands of displaced Afghan refugees began. Philadelphia International Airport, one of several primary entry points for incoming evacuees, has functioned as a hub to evaluate and process individuals and families fleeing Afghanistan before their eventual resettlement in the United States. This effort required a mobilization of volunteers with critical skills and experience, including health professionals and native speakers, and Philadelphia College of Osteopathic Medicine (PCOM) was prepared to answer the call. 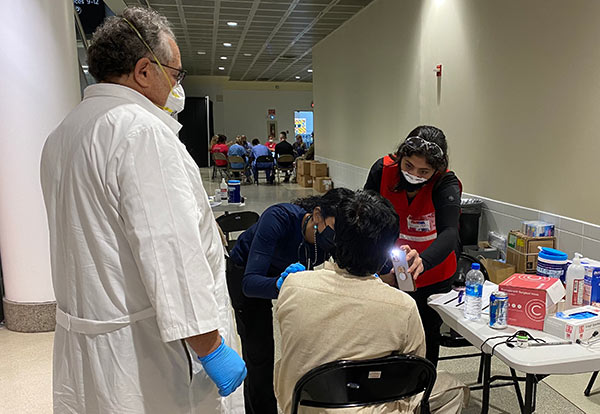 With the arrival of the first refugees, Farzaneh Daghigh, PhD, professor of Biochemistry and an Iranian-American fluent in Farsi, heard there was an urgent need for translators/interpreters, among others, and knew she could help. Assisting with welcoming, intake, interpretation and distributing donated essentials (clothing, toothbrushes, etc.), Dr. Daghigh witnessed the humanitarian crisis firsthand, “I saw some people who had one blanket around them, and that’s all they had.”

Selli Abdali (DO ’23), a first-generation Afghan-American and Doctor of Osteopathic Medicine (DO) student, joined Dr. Daghigh in assisting the evacuees with intake and translation in addition to evaluating for any possible medical needs. She instantly felt a unique bond with the arriving families. “My family came to America in 1989 and I have four older brothers who were all born in Afghanistan,” said Abdali. Two of her initial goals after becoming a physician were to travel to Afghanistan and provide medical care. Unsure if that possibility will ever become a reality, Abdali describes the arrival of Afghan evacuees in Philadelphia as “Afghanistan coming to me” and feels honored to be able to help both the Afghan and medical community. 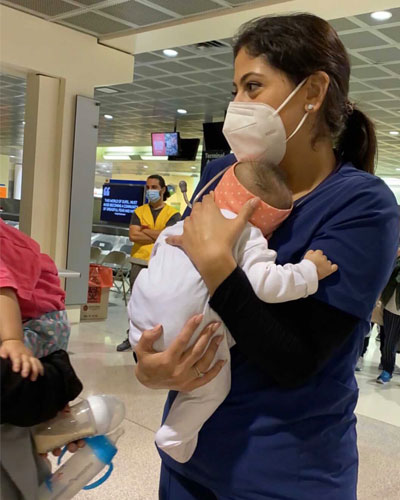 Volunteering since the first flights arrived, Abdali was asked to participate by the Temple Emergency Action Corps, a student-run organization at the Lewis Katz School of Medicine at Temple University that trains medical students to be involved in disaster and humanitarian relief projects. As the only-known medical student in the area fluent in Pashto (one of the primary Afghan languages), her main role as a volunteer was to interpret English to Pashto and scribe for the doctors on-site. “I helped identify details or obtain history that might be missed by someone with no knowledge of our culture,” said Abdali. “The Temple students and I also provided detailed guidelines for medical workers on proper etiquette and cultural consideration when interacting with the Afghan population.”

Abdali has continued her volunteerism in the weeks since, and while it has been a transformative experience for her personally, she hopes the impression she has left with the evacuees will be as equally lasting. “Being the daughter of Afghan refugees, I hope that the parents of these young children know that leaving everything behind in Afghanistan for a better future in America is possible, and I am proof of that.”

How to help refugees in the Philadelphia area

If you are interested in getting involved, several organizations in the Philadelphia area are assisting with support and resettlement of Afghan refugees, including: