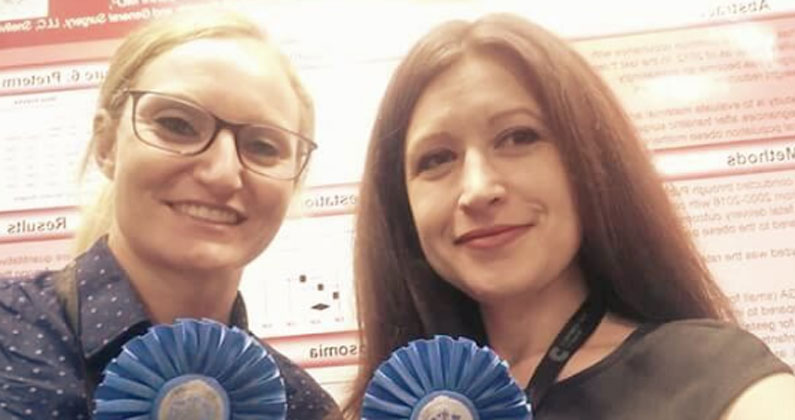 Samantha Drew (left) and Brittanie Young were awarded “Poster of Exceptional Merit” in the General Surgery
Education category at the ACS Clinical Congress in Washington, DC.

Bariatric or weight-loss surgery prior to conception may lead to less risk for both mother and child than conception while morbidly obese, according to a recent study co-authored by students at Georgia Campus – Philadelphia College of Osteopathic Medicine.

Samantha Drew and Brittanie Young – both fourth-year osteopathic medical students – conducted the research under the mentorship of Aliu Sanni, MD. The study’s senior author, Dr. Sanni is the medical director of the department of metabolic and bariatric surgery at Eastside Medical Center in Snellville, Georgia.

“We know that the prevalence of obesity in women is increasing, so we wanted to know more about the impact of bariatric surgery on pregnancy, the mother and the baby,” Drew said.

During the study, Drew and Young evaluated maternal and fetal outcomes in pregnancies after women underwent bariatric operations in comparison with pregnancies in obese women who did not have bariatric procedures. 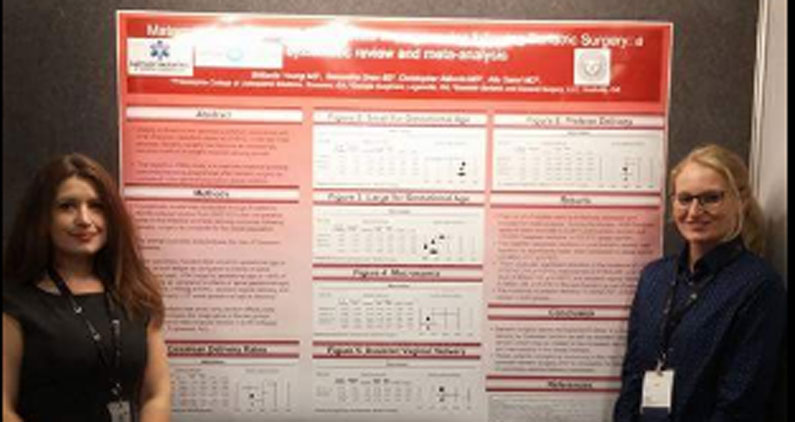 Brittanie Young (left) and Samantha Drew were selected out of 1,500 submissions to display their
research poster project at the American College of Surgeons (ACS) Clinical Congress.

“Our research included women that were at least 18 months post-bariatric surgery, which is the general recommendation,” Young said.

Compared to pregnancies in morbidly obese women who did not have bariatric surgery, research found that the rate of caesarian section (C-section) deliveries was lower for mothers who had undergone bariatric operations prior to conception.

The researchers also discovered a decreased rate of newborns who are larger than average regardless of gestational age, with gestational age taken into account, and with assisted vaginal deliveries. The reduced likelihood of giving birth to large babies also reduces the likeliness that the mother will deliver via C-section, explained Brittanie Young.

The student doctors submitted their abstract entitled, “Maternal and Perinatal Outcomes following Bariatric Surgery: A Systematic Review and Meta-Analysis” to the American College of Surgeons (ACS) Clinical Congress and were selected out of 1,500 submissions to have a poster displayed at the conference.

The Clinical Congress is a scientific and educational meeting designed to keep ACS Members and interested non-Fellow physicians informed of the current status of the art and science of surgery. This year’s Clinical Congress was held October 16 – 20, 2016, in Washington, DC. Drew and Young presented their research posters to conference attendees and gave an oral presentation to a panel of judges. They were awarded “Poster of Exceptional Merit” in the General Surgery Education category and were the only medical students (among residents) to place in the top ten overall posters.

These outcomes have the potential to impact clinical practice, Young says. “Women who are morbidly obese and considering pregnancy can use this information to make more informed decisions about their health and the health of their child.”