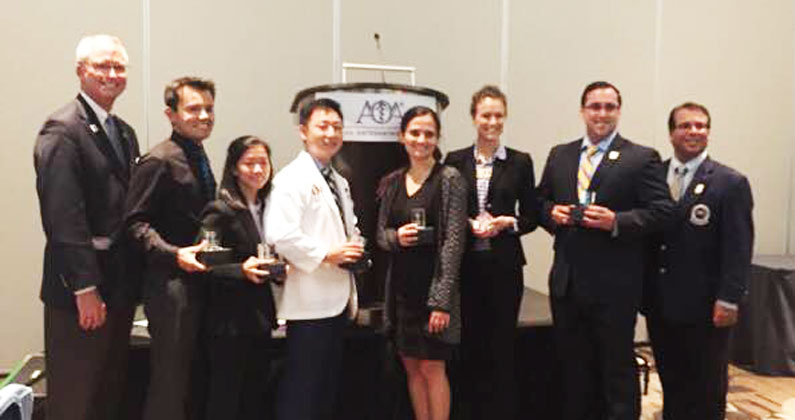 GA-PCOM students are shown with their awards at the recent Osteopathic Medical Conference and Exposition.

With the guidance and encouragement of their faculty mentors, two osteopathic medical students from Georgia Campus - Philadelphia College of Osteopathic Medicine (GA-PCOM) won awards for research presented at the 121st Osteopathic Medical Conference and Exposition (OMED), held at the Anaheim Convention Center in Anaheim, California, this September.

The largest gathering of osteopathic physicians in the world, OMED hosts a student poster competition to provide researchers with the opportunity to present to a broader audience. At the end of the poster session, three first-place and six second-place prizes are awarded out of 111 abstract presentations. GA-PCOM is pleased to report that second-year Doctor of Osteopathic Medicine (DO) students Jung “Charlie” Yoo and Khin Win, took home first and second place prizes, respectively.

Along with Sonia Geevarughese (also a second-year DO student), Yoo began studying under Dr. Lu’s mentorship. They explored the “Mechanism of Cerebellar Ataxia Treatment by Transcranial Direct current Stimulation through Correlation Changes between Cerebellar and Motor Cortices: An In Vivo Approach,” which Yoo presented at OMED.

“I trained them in the beginning,” explained Dr. Lu. “After several months of running experiments together, they could conduct the surgeries and recordings independently. They also learned how to do the data analysis from me and independently. I believe the award reflects the effort they made through all the stages of this research.” 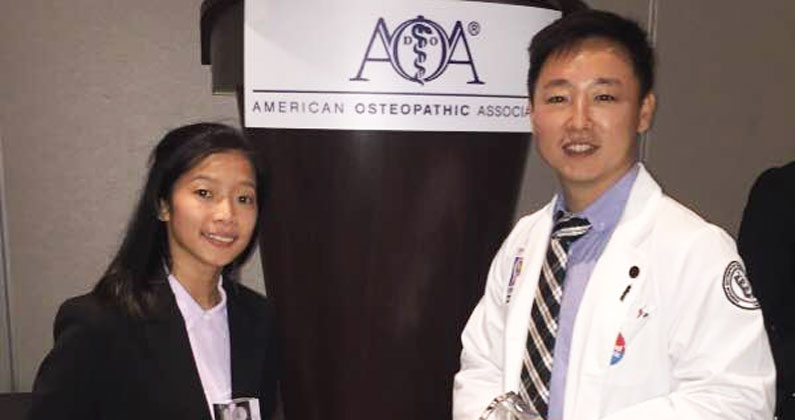 “Dr. Lu has been an invaluable mentor and support throughout my research project," said Yoo. "He has taught me stereotaxic surgical apparatus mounting, neurosurgical techniques, electrode recording, MATLAB programming, electrophysiology data analysis, and much more. I feel privileged and honored to be working with Dr. Lu. My achievements are a culmination of his expert mentorship, along with hard work.”

“I couldn't have asked for a better advisor who was always eager to help whenever needed, but allowed me to be independent to explore what I wanted to in my research,” Win shared.

In addition, she had the guidance of student Megan Burleson (DO ’18)—previously a biomedical sciences thesis student—while learning the experimental set up.

Through her experiments, Win remarked that she had some interesting findings on the mechanisms implemented in the modulation of myogenic tone by testosterone in a resistance microvessel. After completing her thesis for the biomedical sciences track, she decided to expand on her research as a DO student and “further illuminate this novel mechanism.”

During her first year in the DO program, Win accompanied Burleson, who had qualified and competed at the OMED conference in 2015.

“The enthusiasm from these students in sharing their research with physicians, students, and other healthcare professionals at the conference motivated me to present my research at a conference,” she recalled.

Win analyzed the data and prepared a poster for her research project, “Testosterone Modulation of Myogenic Tone in a Rat Mesenteric Resistance Microvessel: a Novel Mechanism.” While Win consulted with Dr. Owen throughout the process, Dr. Owen noted that “Khin is a self- starter and the kind of student one dreams about. She truly made the project her own.”

To be accepted into the competition, both Yoo and Win’s research abstracts underwent a peer review process by conference committee members. Winners were selected by a team of judges based on the materials presented, the students’ demonstration of knowledge of the presentation and originality of the work.