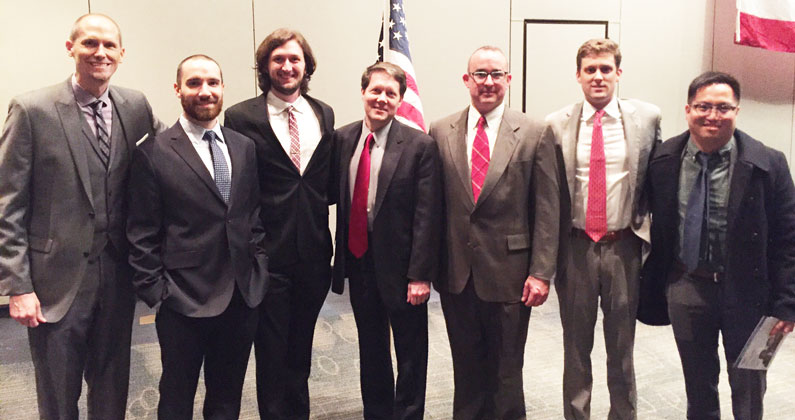 GA-PCOM has several current students who earned the rank of Eagle Scout. Students shown include Christopher Duke (DO '20), Matt Rose (DO '20), Coston Rowe (DO '19), GA-PCOM chief program development and professional relations officer Ben Robinson, Brant Barron (DO '20), Ryan Andrew (DO '20) and Chris Kim (DO '19). Not shown are GA-PCOM students Lynch Major (MS '18) and Soren Jenson (DO '20). The students recently attended the American Values Dinner hosted by the Northeast Georgia Council of the Boy Scouts of America. Robinson attended the event with the students.

Does the hard work and leadership skills it takes to become an Eagle Scout correlate with being a successful student at Georgia Campus - Philadelphia College of Osteopathic Medicine (GA-PCOM)? It appears so. Currently there are at least eight students who have achieved the rank of Eagle Scout on campus.

Second-year DO student Coston Rowe from Gadsden, Alabama, said, “Medical school is certainly the most demanding task I’ve ever agreed to, but scouting—and my Eagle Scout project in particular—taught me that some of the best rewards and achievements come through working hard and persevering through difficult tasks.”

“The schoolwork is hard and seemingly endless sometimes, but I know that because of scouting, I will be equipped to help my future patients on a daily basis and provide for my family in an exciting and fulfilling way," Rowe added.

Christopher Kim, also a second-year DO student from Los Angeles, California, said, “Scouting was an incredible experience that helped me grow in many ways. (It) helped me get my first glimpse of health care after earning merit badges in lifesaving and emergency preparedness. In medical school, we are bombarded with large amounts of material and I strongly believe Scouting has provided me with experience to prioritize my tasks and allowed me to be more efficient with time management.”

First-year DO student Brant Barron, who hails from Thomaston, Georgia, is also using lessons learned from his days in scouting.

"Scouting introduced me to the practice of applying constant effort to reach increasingly more difficult goals," Barron said. "Many challenges presented in Boy Scouts let me experience situations where my personal strengths, mental preparedness and adaptability that I normally depended on would be exhausted. I learned that only the faith to persevere could guide me to the task’s completion.”

The three, along with three other GA-PCOM students, recently attended the American Values Dinner at the invitation of Chief Campus Officer Bryan Ginn. The dinner, hosted by the Northeast Georgia Council of the Boy Scouts of America, featured a local scouting report, an address by Lieutenant Governor Casey Cagle, and the awarding of Distinguished Citizen awards. Both of PCOM’s Georgia board members, Wayne Sikes and David McCleskey, have received these awards in past years.

What does an Eagle Scout project consist of?

Rowe explained, “Along with other requirements, in order to advance from Life Scout to Eagle Scout, you must initiate, plan, manage and carry out a service project directed to benefit the local community...It is up to you to plan, recruit help for, and execute this project, thus demonstrating leadership and a commitment to service."

“There were many times within that year that I just wanted to call it quits and not worry about the logistics anymore,” he said. “But with the encouragement and help of my dad, my scout masters, and my other family and friends, I persevered and finished the project one year and one week after the first day of labor.”

“I had my troop members, as well as several friends and family members help me with this project,” he said.

Barron summed up their sentiments: “This trait of stickability that I gained through my experience in Boy Scouts is benefiting me the most in the particularly arduous challenge of medical school.”

Among the other Eagle Scouts on campus are Ryan Andrew, Christopher Duke, Soren Jensen, Lynch Major and Matt Rose.