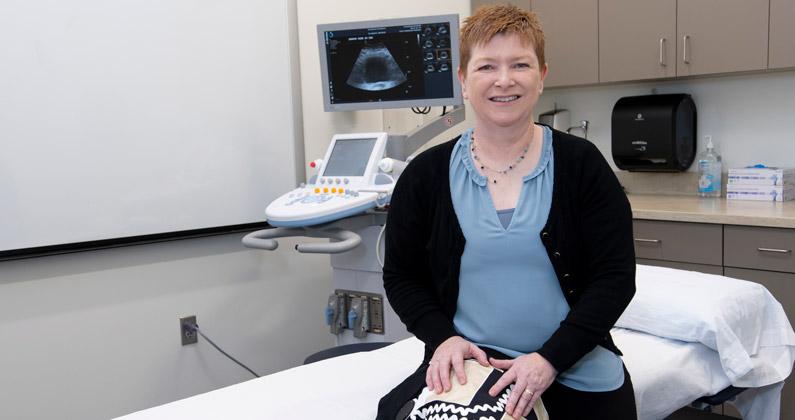 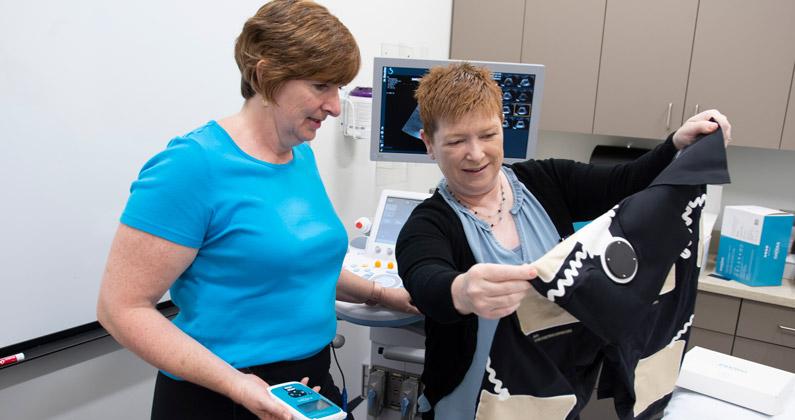 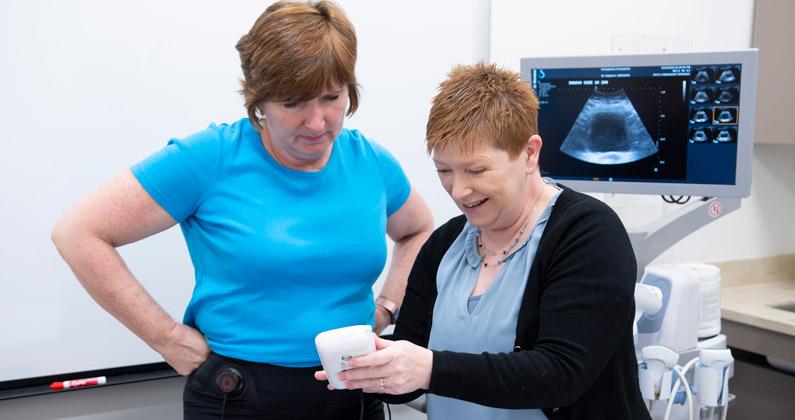 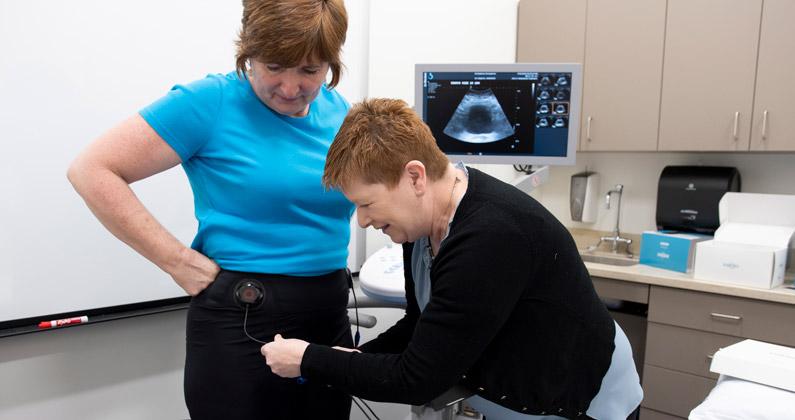 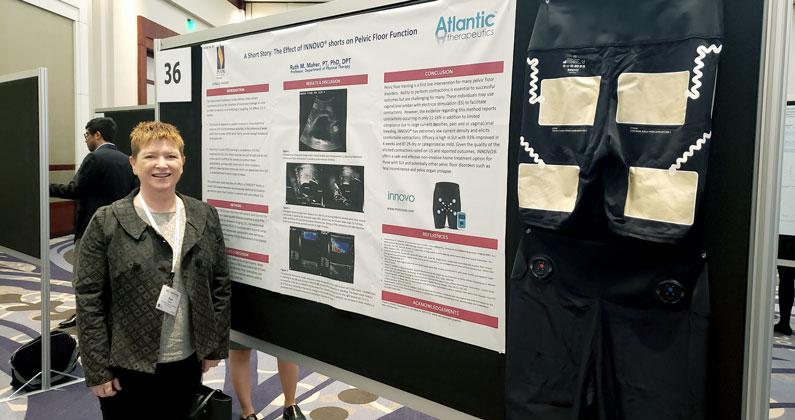 A device, co-developed by Dr. Ruth Maher that helps women with stress urinary incontinence, earned an Innovation of the Year award.

Following a circuitous path and an 11-year development process, a PCOM Georgia physical therapy (PT) professor and a device manufacturer have recently been recognized for an invention aimed primarily at women suffering from stress urinary incontinence.

A pair of shorts embedded with electrical stimulation technology and co-invented by Ruth Maher, PT, PhD, DPT, recently received the Irish Times “Innovation of the Year” award. In addition, Dr. Maher was recognized with the Rick Hillstead Medical Devices Award for her poster presentation at the Georgia Bio Innovation Summit.

Fitting for November which is “National Bladder Health Awareness Month,” Atlantic Therapeutics where Dr. Maher serves as the clinical advisor received the European “MedTech Company of the Year” award, in addition to the “License2Market Impact” award for its collaboration with University College Dublin in Ireland where Dr. Maher co-developed the shorts while earning her PhD.

According to Dr. Maher, stress urinary incontinence, one of the most common types of incontinence experienced primarily by post-partum women in their early 30s to 50s, can occur when the affected person coughs, sneezes, laughs or exercises causing urine leakage. This type of incontinence also affects college-aged women engaged in high impact activities and post-menopausal women.

A board-certified clinical specialist in women’s health from the American Board of Physical Therapy Specialties, Dr. Maher realized the extent of the problem when she began to ask her physical therapy patients probing questions about their bowel and bladder control. “I soon recognized that stress incontinence is a silent epidemic and affects one in three women,” she said.

Aside from the cost of pads and supplies, there’s a huge cost to quality of life, she said. “Not wearing nice clothes, wearing dark clothes, baggy clothes, carrying around a humongous bag because your diapers or your underwear are in it, avoiding shopping because you don’t know where the bathrooms are, leaking during coitus which ruins relationships, ruins intimacy.”

“Then all the risks that go with not exercising. Why would you jump up and down and go to an aerobics class if you’re going to be leaking in your pants?” she asked. “So what comes with that – cardiovascular risk, the threat of stroke, obesity and associated conditions such as diabetes and metabolic syndrome? That’s the potential cost of not addressing this.”

Bladder weakness is the term commonly used for this condition, she said, “but that’s like blaming the reservoir for the leaky faucet in your house which isn’t a plausible diagnosis. If you have a leaky faucet, you check the O rings and all of the components of the faucet. Similarly if you’re leaking urine, you check all the components that keep the holes closed – the urethra and the pelvic floor which are muscles, and the connective tissue. The bladder is incidental in this type of urinary incontinence.”

Armed with this knowledge, Dr. Maher decided to learn as much as she could about the pelvic floor which Kegel exercises or pelvic floor muscle training help to strengthen. She began taking courses and joined the International Incontinence Society, the International Urogynecology Association and the American Institute of Ultrasound in Medicine. Her interest led her to collect data which she began presenting at the organizations’ annual conferences.

With an Irish lilt, she said, “There was a cohort of my own patients who couldn’t physically perform pelvic floor contractions to strengthen and improve coordination even with ultrasound imaging and a digital exam as biofeedback tools.”

An idea began taking shape. “I knew from physical therapy school that electrical stimulation worked everywhere else in the body and I’d used it for people post-surgery,” she said.

She related that recent research finds that neuromuscular (sensory and motor) electrical stimulation can immediately improve the communication between the brain and the muscles, thus enhancing motor skills due to the nervous system’s ability to change or adapt to stimuli.

“This is very exciting,” she said, “as many perceive electrical stimulation to be a passive modality.”

“There was already a probe-based therapy with two very small stimulating electrodes on the market that elicited contractions in about 16 percent of women,” she said. The low percentage was possibly due to the variability in the nerves which stimulate the pelvic floor musculature, however, Dr. Maher noted that there is agreement that “the nerve roots that come off the sacral area, the posterior wall of the pelvis, innervate the pelvic floor.”

She used this information to design the prototype of what is now known as INNOVO, a pelvic floor stimulating technology housed in customized shorts. The shorts, which come in a wide variety of sizes, enable the electrical stimulation to be spread out over a wide area, increasing comfort.

Although they look like “bike” shorts, they’re not. The garment uses patented multipath stimulation which provides a variety of ways to stimulate the nerves innervating the pelvic floor. According to Dr. Maher, this method avoids the fatigue associated with conventional neuromuscular electrical stimulation which uses a single pathway to provide a stimulus.

She compares the treatment area to a tree. “The tree trunk is the spinal cord and then you have ancillary roots and peripheral branches. I can program in the pulse to go in diagonals or multiple paths using the eight integrated electrodes to maximize muscle recruitment, while minimizing fatigue,” she said.

Ideally, a patient should use the shorts five times a week for 12 weeks for optimal outcomes with most realizing significant improvement within four weeks, she said, explaining that the improvement is due to neural adaptation. This means that the nervous system adjusts to the stimulus and coordination is enhanced. As a result, pelvic floor strength is improved within six to eight weeks of use.

“The device replicates the brisk coordinated pelvic floor contraction that maintains continence during laughing, coughing, sneezing and exercise thus preventing urinary leakage,” Dr. Maher said. She added, “This coordinated contraction is vital to those suffering from stress urinary incontinence, maybe even more so than strength and endurance of the muscles.”

Dr. Maher is one of four people who hold a patent on the technology which first came out in Ireland in 2010 and she is eligible for royalties.

“I didn’t design this technology for money,” she said. “I had friends who had this issue and it ruined their lives. With all the things that go on in a woman’s body, a lot of it terminates in the pelvis and we’re just supposed to go home and move on with life. I don’t think women are educated enough to know what’s coming down the pike, what they can do to ameliorate or possibly prevent the symptoms of these conditions because there’s a lot you can do.”

Improvements continue to be made to the shorts which, having gained FDA clearance, will be marketed in the United States, and will soon be available over the counter. According to Dr. Maher, the data that was used to garner FDA clearance, reported that 80 percent of users saw significant improvement in symptoms after four weeks of use and 87 percent of users were dry or considered near-dry after three months of use.

This past October, the PT department at PCOM Georgia in Suwanee hosted a free pelvic floor screening dubbed “What Lies Beneath?” to educate women about this issue. Dr. Maher advised attendees to continue doing Kegel exercises while standing, sitting at work, or while in the shower, but they must be performed appropriately.

Slightly teary-eyed, she said, “I’ve learned to never give up and I’ve taught this to my students. I can’t believe I’ve had to wait so long for something that is non-invasive, can be used at home and that greatly improves lives.”