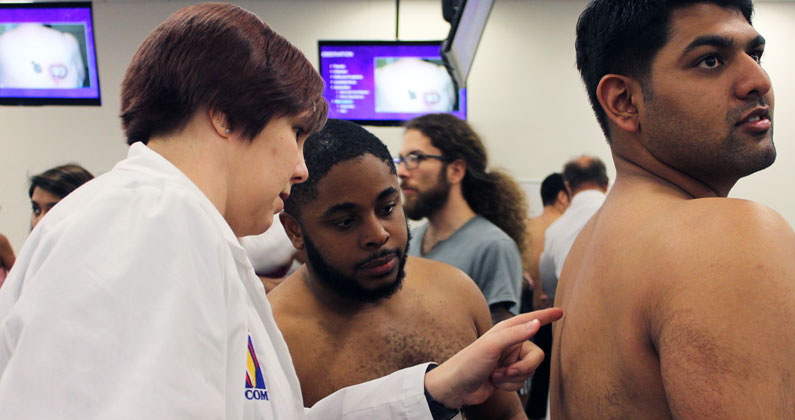 While a student at GA-PCOM, Dr. Petree was chosen to be one of the inaugural Osteopathic Undergraduate Teaching Scholars. Scholars assist first- and second-year students in mastering the art and science of osteopathic manipulative medicine and have academic, clinical and research responsibilities beyond those of other students.

Before becoming a faculty member at GA-PCOM, Dr. Petree taught for a year at The Campbell University Jerry M. Wallace School of Osteopathic Medicine in Buies Creek, North Carolina, where she was an assistant professor of osteopathic manipulative medicine. She said Director of Osteopathic Manipulative Medicine Dr. Walter Ehrenfeuchter invited her back to GA-PCOM where she’s now “living the dream.”

Dr. Petree completed an osteopathic internship at E.W. Sparrow Hospital in Lansing, Michigan, in 2014, before completing a residency in neuromusculoskeletal medicine and osteopathic manipulative medicine at Michigan State University College of Osteopathic Medicine. She served as chief resident and was named the 2016 Resident of the Year by the American Academy of Osteopathy.

Dr. Petree was raised in Florida and earned a Bachelor of Science in Molecular Biology and Microbiology from the University of Central Florida in Orlando. She has published articles in the Journal of the American Osteopathic Association, the American Academy of Osteopathy Journal, and the International Journal of Osteopathic Medicine.