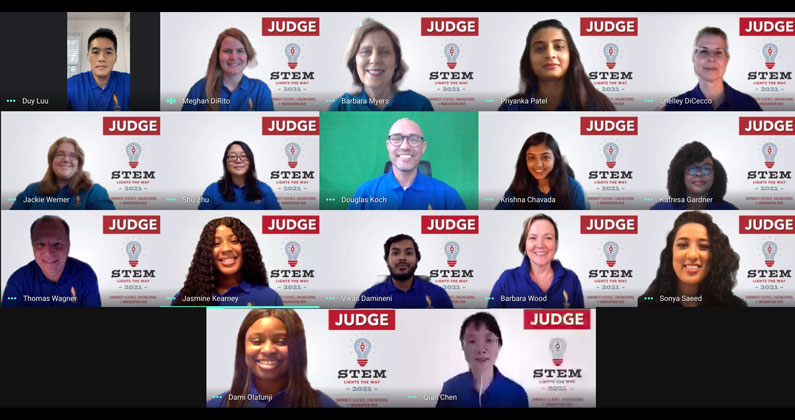 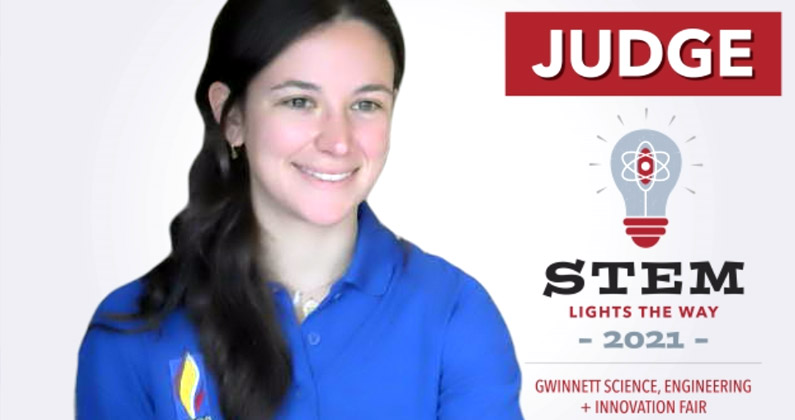 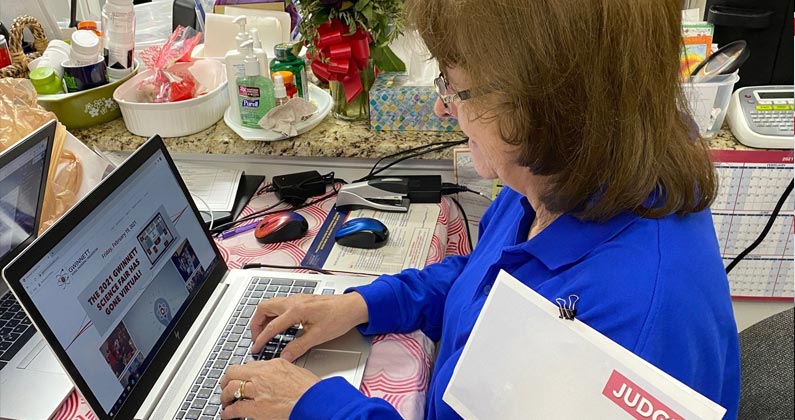 Biomedical Sciences graduate student Vikas Damineni (MS/Biomed ’21) volunteered to judge student projects this year. He noted that one of the students he judged was following the same path he recently walked, even attending the same high school - Peachtree Ridge in Gwinnett County. “It was a great experience giving him advice as I was in his same footsteps presenting at the science fair six years ago. I appreciate the opportunity PCOM Georgia gave me to make the circle complete, from being a high school student in the science fair to judging students.”

As part of the fair, PCOM Georgia Professor Diana Peterson, PhD, prepared and presented a 15-minute session on The Anatomy of the Brain. In addition, the leadership team for the Summer Math and Science Academy recorded an infomercial about the camp and invited Science Fair participants to attend. Among the organizations that were invited to present workshops, along with PCOM Georgia, were Boehringer Ingelheim, University of Georgia Engineering, Georgia State University, NASA, and LEGO Education.

With a goal of showcasing the county’s STEM talent while connecting students with STEM business and community leaders, fair organizers worked with health and community partners, as well as affiliated fairs, including the Georgia Science & Engineering Fair, the BroadCom Masters National Competition, and the Regeneron International Science & Engineering Fair, to plan a safe, engaging and competitive event. Student presenters included those with winning projects from public, private, charter and home schools in Gwinnett County. More than $14,000 in scholarships and awards were given to students and six projects advanced to the international fair.

Doug Koch, EdD, academic development coordinator at PCOM, said he was “really impressed” with the students he judged. “Not only did they have excellent projects, but they also exhibited a great deal of maturity and insight.” He noted that several of the projects were a result of personal experiences and a desire to solve real-world problems. “The altruistic nature of the students in general really warmed my heart, something I really needed after yet another snowstorm,” he said.

Student Madison Cohen (MS/Biomed ’21), who will matriculate into the Doctor of Osteopathic Medicine (DO) program this August, enjoyed encouraging the students to continue their pursuit of science and to think critically. “Some of the students blew me away with their creativity and ability, as well as the high level of their projects,” she said.

“It was rejuvenating to hear such enthusiasm for research in high school students,” said Shelley DiCecco, PT, PhD, assistant professor in the Department of Physical Therapy, who strongly encouraged other PCOM faculty, staff and students to volunteer. “The professionalism the students demonstrated in the presentations was commendable.” She added, “It is a great way for PCOM Georgia to increase exposure to these exceptional students in the hopes they may choose to pursue a degree with PCOM.”

Colleen Heer, assistant to the chief campus officer, volunteered to judge high school animal science-related projects. “I was impressed with the students’ depth of talent, creativity and knowledge about their projects,” she said. Other judges in her virtual room included a PCOM pharmacy student, a college biology professor, a high school chemistry teacher, and an administrator with the Buzz Aldrin Foundation who recently played a part in the Mars landing. She judged projects ranging from “Behavioral Sensitization in Planarians Using Ibuprofen Drugs” to “Best Common Hair Base Products for the Tensile Strength of Hair” to “The Impact of Climate Change on Sea Turtle Populations.” 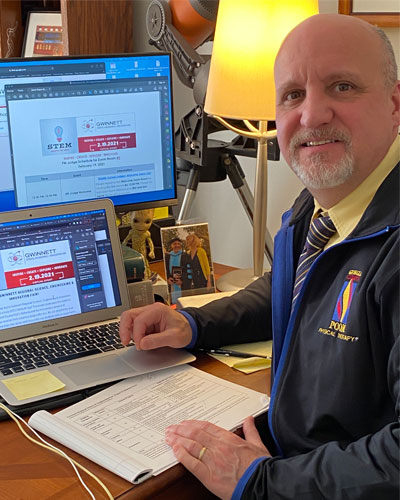 Philip Fabrizio PT, DPT, EdD, associate professor in the Department of Physical Therapy, said his experience as a judge “was on par with the judging that I do for my professional associations during conferences.” He added, “There was never a doubt of what was expected from the judges and all interactions with Gwinnett staff were personable and caring. I would definitely do this again!”

As the presenting sponsor of the fair, PCOM Georgia had the opportunity to deliver a welcome message. This year, Department of Pharmacy Practice Associate Professor John Tovar, PharmD, welcomed the students telling them that “we need you in the fields of science, engineering and innovation. Stay the course, study hard, and apply yourselves in learning everything you can during these very important formative years,” he said.

An awards video will feature Dr. Tovar along with PCOM Georgia students who made congratulatory videos to celebrate with the students. From all counts, the Gwinnett County Public Schools’ first virtual science fair in its 43-year history was a resounding success.

Established in 2005, PCOM Georgia is a private, not-for-profit, accredited institute of higher education dedicated to the healthcare professions. The Suwanee, Georgia, campus is affiliated with Philadelphia College of Osteopathic Medicine, a premier osteopathic medical school with a storied history. PCOM Georgia offers doctoral degrees in osteopathic medicine, pharmacy, and physical therapy and graduate degrees in biomedical sciences and physician assistant studies. Emphasizing "a whole person approach to care," PCOM Georgia focuses on educational excellence, interprofessional education and service to the wider community. The campus is also home to the Georgia Osteopathic Care Center, an osteopathic manipulative medicine clinic, which is open to the public by appointment. For more information, visit pcom.edu/georgia or call 678-225-7500.