Morgan Fuller Selected as Student DO of the Year 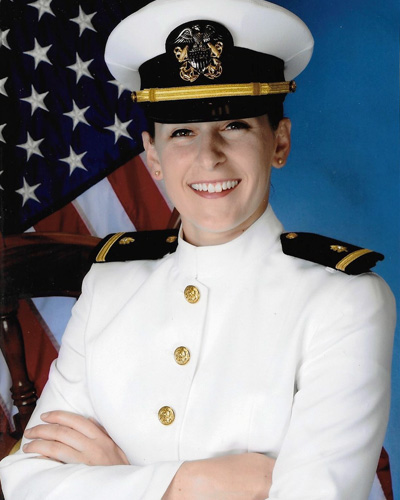 Morgan Fuller (DO ’21), a fourth-year student and an ensign in the U.S. Navy, was recently named PCOM Georgia’s Student DO of the Year. Among her numerous accomplishments, Fuller has served for the past four years as the chair of the Class of 2021. In this position, she is the liaison between her classmates and PCOM Georgia’s faculty and administration. In addition, she is well known in Georgia’s osteopathic medicine program for her service and involvement.

Fuller said, “l’m honored to be nominated for this award. I could not have accomplished my goals and all the service projects over the last few years without my fellow student leaders, classmates and mentors.”

Sponsored by the Council of Osteopathic Student Government Presidents, a part of the American Association of Colleges of Osteopathic Medicine, the Student DO of the Year award “honors and recognizes an osteopathic medical student who is committed to the principles of leadership, community service, dedication and professionalism.”

According to Abhi Srivatsa (DO ’23), this year’s coordinator of the campus’ Student DO of the Year selection committee, Fuller has been dedicated to welcoming incoming osteopathic medicine students even while on third and fourth year rotations away from campus, as well as advising second year DO students about board exams. In addition, she played an important role for the PCOM South Georgia inaugural class by serving as an anatomy teaching assistant and as the site leader for the Southwest Georgia third year rotation site.

A dedicated volunteer while a student at PCOM Georgia, Fuller has participated in the Medical Association of Georgia’s Physicians Day at the Capitol, at the Two Step CPR Public Health Initiative, and as a mentor for Camp Neuro among other activities.

She has distinguished herself by receiving the American Academy of Family Physicians Leads Scholarship, the Navy Health Professions Scholarship, and for being selected to the Gold Humanism Honor Society and Sigma Sigma Phi, a national osteopathic medicine honors fraternity.

Prior to attending medical school, Fuller graduated from Rhodes College in Memphis, Tennessee, where she captained the women’s varsity lacrosse team, was a member of the Beta Beta Beta honor society, and worked as the head resident assistant.

She noted that the COVID-19 pandemic and resulting quarantine have greatly influenced her outlook as a future physician making her role as an educator and caregiver “more important than ever.”

Fuller said, “The pandemic has forced the healthcare community to develop effective ways to utilize telemedicine, to build evidence-based social media campaigns to combat misinformation, and to connect with our patients where they are located. In my future practice, I plan to carry these COVID-19 lessons with me to become a versatile family medicine physician who can adapt to any austere or controlled environment.”

Each of the nation’s osteopathic medical schools may choose a student who has contributed to the osteopathic medical profession and submit their choice to the COSGP committee. The national Student DO of the Year will receive a $1,000 award in addition to the honor.