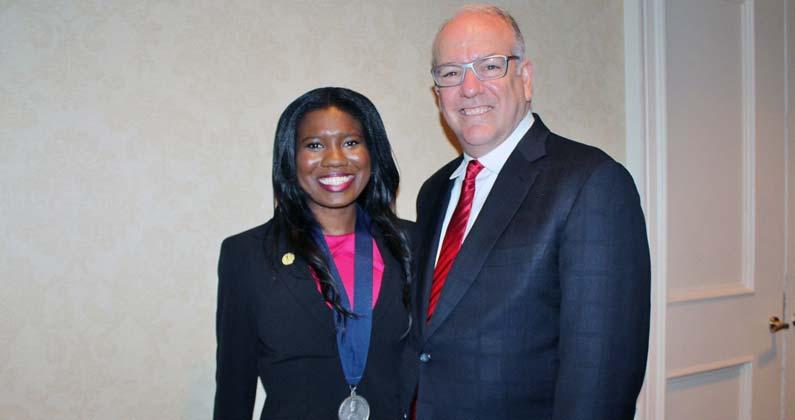 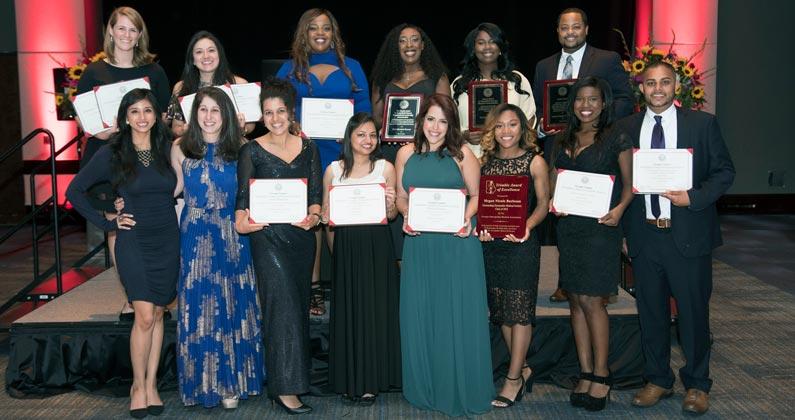 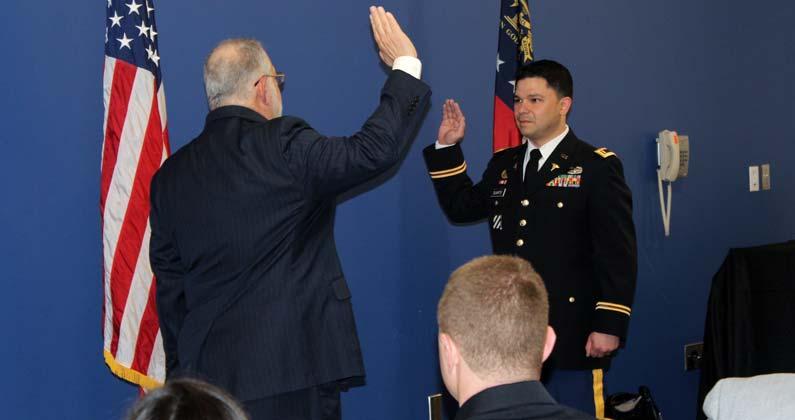 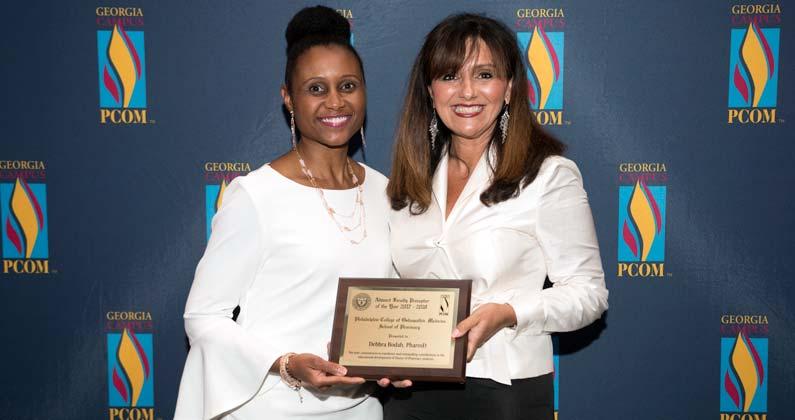 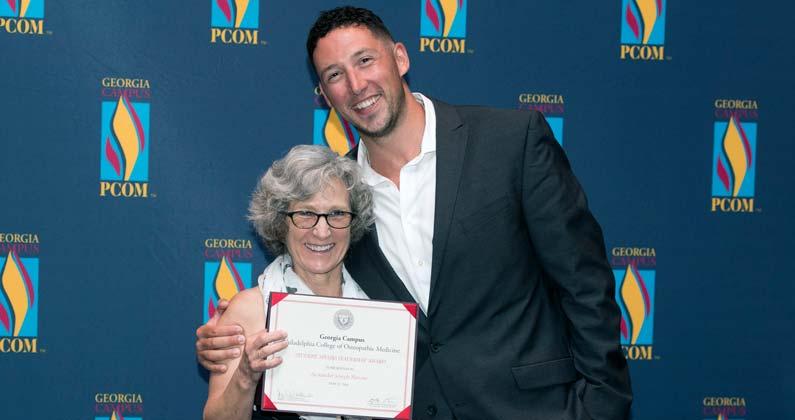 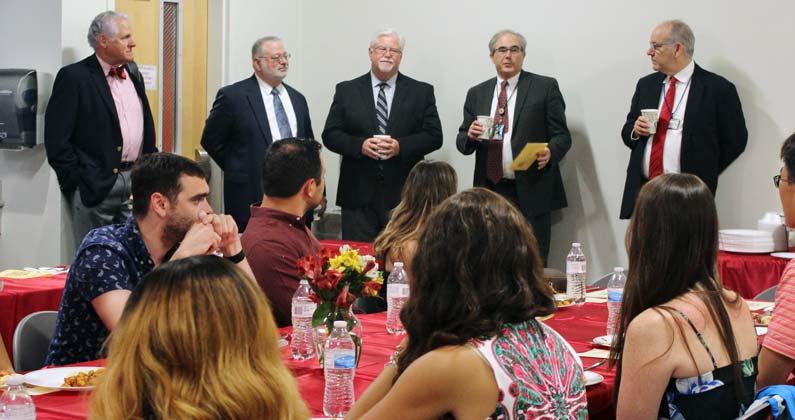 The 2018 commencement season at Georgia Campus – Philadelphia College of Osteopathic Medicine (GA-PCOM) included a number of important occasions from honor society brunches, to a commencement dinner-dance, to a military pinning ceremony, and this year to the Mason W. Pressly Memorial Medal reception.

Students also received graduation regalia, had a class photo taken and bonded, after returning from their third and fourth years away from campus, at an outdoor picnic.

Class of 2018 members of Alpha Epsilon Lambda (biomedical sciences), Sigma Sigma Phi (osteopathic medicine) and Rho Chi (pharmacy) were honored at brunches where they received honor cords to wear during their commencement ceremonies.

The Class of 2018 Commencement Dinner Dance was held May 22, 2018, at the Infinite Energy Center. Graduating students heard from School of Pharmacy Dean Shawn Spencer, PhD, and Osteopathic Medicine Dean H. William Craver III, DO, in addition to PCOM President Jay Feldstein, DO.

Class chairs addressed their classmates. Krystle Richmond, MS ’18, said, “My acceptance into this program gave me renewed hope and now my completion of this program only adds fuel to the heights I know I can go. I believe this stands true for the rest of my biomedical sciences class.”

Alexander Navone, DO ’18, said, “We learned how to speak to patients, how to make diagnoses, how to treat illnesses. We also learned about ourselves – what kind of medicine draws our interest and what kind of patients to devote our lives to.”

Anthony Alexander, PharmD ’18, recalled that he had also addressed his classmates during the White Coat Ceremony in 2014. “We were so fresh, excited, anxious, bright-eyed and bushy-tailed to begin our journey to becoming healthcare professionals. To say these past few years have been challenging is an understatement.”

He added, “We’ve been running a marathon until now. Always remember that the victory doesn’t go to the fast nor the swift, but to those strong enough who endure to the end. And I am proud to say that we remained steadfast over the years and now we can bask in the glory of our efforts.”

Alexander concluded, “I charge each and every one of you to be the change in the world that you want to see.”

Students were honored by faculty members with a myriad of awards recognizing community service, leadership and scholarship.

A military pinning ceremony led by Associate Dean for Clerkships and Core Site Development Murray Berkowitz, DO, (US Army Ret.) honored five DO students who will serve in the United States Air Force, Army, Navy and Reserve National Guard. Founding Dean of GA-PCOM Paul Evans, DO, addressed the audience. “You will learn a great deal about medicine and what it means to be a citizen of the United States to people around the world.”

The 2018 GA-PCOM Mason W. Pressly Memorial Medal Recognition Reception was held on May 23, 2018, at the 1818 Club and honored medal recipient Danielle Ward, DO ’18. Ward addressed the attendees. “Osteopathic medicine has given me the opportunity to achieve my dream of becoming a physician,” she said. “I look forward to continuing to make you all proud.”

As the commencement season for the biomedical sciences, osteopathic medicine and pharmacy classes is behind us, campus students, faculty and staff members look forward to the graduation of the inaugural class of physician assistant studies students on July 31, 2018, at the Infinite Energy Center.

Established in 2005, PCOM Georgia is a private, not-for-profit, accredited institute of higher education dedicated to the healthcare professions. The Suwanee, Georgia, campus is affiliated with Philadelphia College of Osteopathic Medicine which has a storied history as a premier osteopathic medical school. PCOM Georgia offers the doctor of osteopathic medicine degree, the doctor of pharmacy degree, the doctor of physical therapy degree, as well as graduate degrees in biomedical sciences and physician assistant studies. Emphasizing "a whole person approach to care," PCOM Georgia focuses on educational excellence, interprofessional education and service to the wider community. The campus is also home to the Georgia Osteopathic Care Center, an osteopathic manipulative medicine clinic, which is open to the public by appointment. For more information, visit pcom.edu or call 678-225-7500.