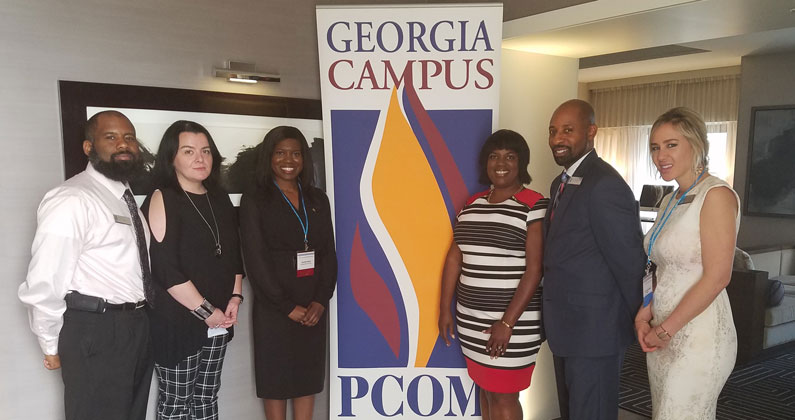 The GA-PCOM Admissions and Institutional Advancement teams were in attendance to support Danielle Ward (third from left) as she assumed the position of SNMA National President.

Third-year DO student Danielle Ward took the reins of the Student National Medical Association (SNMA) last week as she was installed as the national president at the organization’s annual conference. Ward made history as she is the first osteopathic medical student to assume this position since the SNMA’s founding in 1964.

With a mission to not only nurture and support the academic enrichment of its medical student members, but also to serve communities in a very real and proactive way, the SNMA is a student-governed organization with more than 7,000 medical and pre-medical student, resident and physician members. Its chapters are based at allopathic and osteopathic medical schools across the nation, and have an underlying goal of increasing the number of clinically excellent, culturally competent and socially conscious physicians.

Ward’s involvement with the SNMA spans over a decade as she first became involved with the organization as a pre-medical student. During her medical school career, she has served the organization as Georgia Campus – Philadelphia College of Osteopathic Medicine (GA-PCOM) chapter president and as the 2015-2016 national osteopathic schools committee co-chair.

Ward said she is extremely excited to serve the SNMA as national president.
"I believe [serving] will give greater recognition to the osteopathic profession and allow me to be a voice for our non-traditional students, while promoting cultural competency and diversity in medicine," she said. 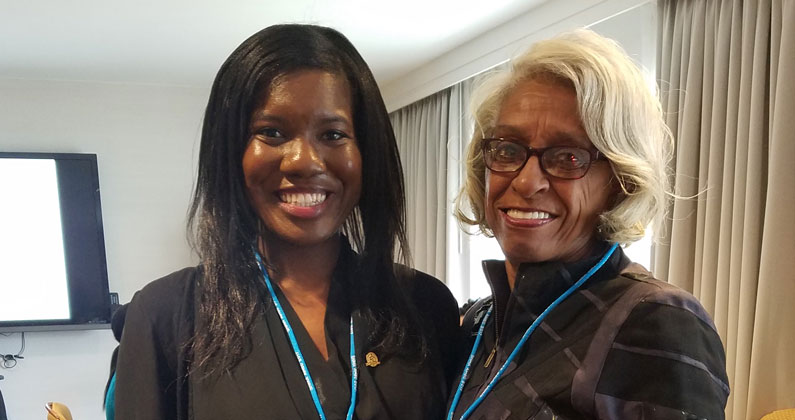 Danielle Ward (left) poses with Barbara Ross Lee, DO, a physician and the first African-American woman to become a medical school dean.

“I am extremely appreciative of all the support and encouragement I have received from both our Georgia and Philadelphia PCOM SNMA chapters," Ward said. "Having student and administrative members from both campuses attend the annual conference and cheer for me during my inauguration was the best thing ever.”

A member of the GA-PCOM DO class of 2018, Ward pens a blog titled "Aspiring Minority Doctor," in which she describes her journey through medical school as an African-American single mom to an active 10-year-old daughter. She is a 2009 graduate of Louisiana State University with a B.S. degree in biochemistry and a 2013 graduate of the University of Saint Joseph where she earned an M.S. degree in biochemistry.

Ward explained she started the blog to serve as a relatable figure to others on the same path.
“I noticed that it is very hard to find minority women in osteopathic medicine (or just medicine in general for that matter) on the web, so I wanted to do something to highlight these women," she said.
Her goal, she said, is to be a source of encouragement and inspiration for young minority females considering medicine.
“I also want to document my journey so that I can have something to look back on one day as a reminder of how far I have come,” she added.