As told by Pat Lannutti, DO '71, MSc, Professor and Chair, Division of General Internal Medicine 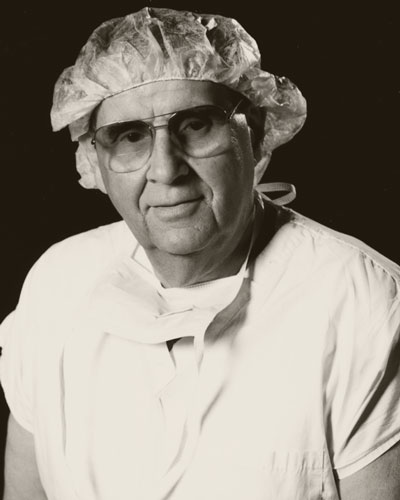 ”Nick Pedano was my guide and counselor—and also my cousin. My grandmother was a Pedano. … When I decided I wanted to go to PCOM, Nick wrote a letter for me. Later, when I had a little trouble with anatomy, Nick talked to his close friend Angus Cathie [then chair of the department]. …Nick wanted me to be a surgeon, even though I said, ‘Nick, I’m not good with my hands.’ … I remember one case, the second operation was 12 hours. I’m short, so I had to stand on a stool, and I said, ‘Maybe it’s better if I pass out.’ After it was over and we were taking the gloves off, I said, ‘Cuz, this is not for me.’ He said, ‘All right. You’re going to go into internal medicine.’ … Nick could order you to do something and you did it, and then— ‘Wait a minute, what am I doing?’ … The whole family had a commanding presence. Surgeons have to be commanding, and they have to give orders, but they get away with more if the iron fist has a velvet glove. … There were two parts of Nick’s personality. He was friendly, and he was bossy—but he had a nice way about him. … He had a house down the shore in Margate, right by the ocean, and he would have a party every year for the interns and for the residents, a beautiful affair. He would wine and dine them because he appreciated what they did for him. And he developed relationships all the way up the line. That was the social Nick. In the operating room, he took no hostages, because he had to get things done the way he wanted them done. … As chairman of surgery, Nick led the way to the growth of PCOM by example. He had a massive service, with tons of patients. He went all over the place to nurture family doctors. … The people who worked with him were indefatigable and inextinguishable. The College is to a large degree where it is because of his absolutely brilliant energy. … From Nick, I saw that leadership is not totally dictatorial or totally social. It’s a good mixture of both. So I try to achieve that balance with my house staff. Yes, we work hard. When it comes time for me to be the boss, they look at me as the boss. But then I’ll say, ‘Okay, it’s five o’clock, let’s go over to the Hilton.’ ”