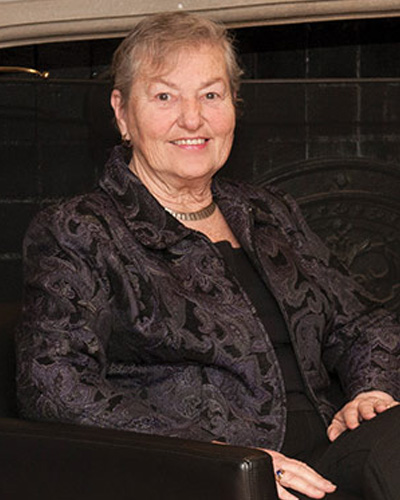 Lavinia “Vinnie” Lafferty’s career as executive assistant to the president and secretary to the Board of Trustees at Philadelphia College of Osteopathic Medicine has spanned five decades, five presidential tenures and thousands of students. She has witnessed the College’s growth, both in scope and size: the acquisition and construction of the present City Avenue campus, the opening of the healthcare centers, the sale and demolition of the hospital, the addition and expansion of academic programs, the institution’s reach into the South.

Hers is an immeasurable institutional memory and an invaluable understanding of collegiality, of the very heart of the PCOM family.

You can say she indeed owns a piece of PCOM history.

Mrs. Lafferty shares the distinction with very few: holding the same job for over a half a century. According to the US Bureau of Labor Statistics, on average, workers change jobs 12 to 15 times—nearly every 4.4 years—throughout their careers. Millennials expect to stay in a position for less time (2.5 to 3 years), equating job-hopping with career advancement.

“I was hired at the College on May 11, 1970,” she says. “I stayed because I could grow; I could learn something every day. If you like what you do, it isn’t work, it is a pleasure. Why change what you love? My motto has always been, ‘If it isn’t broken, don’t fix it.’ ”

In 1970, Mrs. Lafferty found herself going through a divorce, looking for employment close to home and to her toddler. Mrs. Lafferty’s family doctor was an osteopathic physician, so she knew about the profession, and her son’s pediatrician practiced at the Frederic H. Barth Pavilion. She thought to apply to PCOM. Shortly thereafter, she was hired to work for the College controller, the office located in the Moss House (now, the Levin Administration Building). The position lasted four years.

In September 1974, she was transferred into the President’s Office, joining Nancy McCullen, then secretary to the president. Mrs. Lafferty would go on to serve under Thomas M. Rowland, Jr., one of the most beloved figures in the history of the College, until his passing.

“President Rowland was the ultimate professional; his whole demeanor was one of authority. He had served in World War II. He was very involved with the students and faculty and cared about them deeply. I remember that—even as he suffered from lung cancer—he came into work every day. At times, he ran PCOM from his hospital bed in Barth Pavilion.”

The Best of Times, the Worst of Times and Back Again

In November 1984, J. Peter Tilley, DO, was elected as the College’s fifth president. “He had been vice president of operational affairs, a radiologist,” says Mrs. Lafferty. “When he assumed office, I remained in my post and continued my work.”

Unfortunately, the mid-1980s marked the emergence of managed health care; reimbursement policies changed the face of medicine. Obtaining a medical degree became less appealing. During this time, the College and Barth Pavilion faced financial and management problems. “Things went from the sublime to the ridiculous,” Mrs. Lafferty notes.

In a radical turn of events in 1990, a new president, Leonard H. Finkelstein, DO ’59, backed by a dedicated group of DOs and new Board Chairman Herbert Lotman, LLD (Hon.), emerged to steer PCOM through its crisis and, ultimately, into a decade of prosperity.

“President Finkelstein and the Kitchen Cabinet salvaged the College,” Mrs. Lafferty laughs. “President Finkelstein was strong-spirited but fair; he did what no one else could have done. He was a surgeon, and he carried out the duties of the office with the precision and judgment of a surgeon. He sold off Barth Pavilion [and Parkview] to save the College from bankruptcy. As an aside, I learned more about urology from him than I ever wanted to know!

“Mr. Lotman deserves a lot of credit as well,” Mrs. Lafferty continues. “He was a gracious businessman through and through—a financial genius and a generous philanthropist. The College truly meant something to him; his wife has long-standing ties to the institution. He really kick-started the PCOM Foundation.”

In January 2002, Matthew Schure, PhD, was installed as the College’s seventh president. “President Schure came from New York with a fresh strategic vision. He expanded the College’s graduate program offerings and brought PCOM Georgia to fruition,” Mrs. Lafferty says. “But for me, it was President Schure’s demeanor that had the greatest impact. He graciously opened his door and heart to the community; he had such a wonderful way about him, a profound goodness. He lived his beliefs and convictions. He was genuinely interested in everyone and everything. He instilled a culture of family.”

As One Chapter Closes, Another Begins

Mrs. Lafferty has been working with Jay S. Feldstein, DO ’81, since he assumed the presidency in July 2014. “In many ways, he’s a good ‘end note’ for me,” Mrs. Lafferty says. “President Feldstein is a truly caring individual. He’s likeable, a people person. He makes himself readily available to faculty and staff—and especially the students. He always wants what is best for the students. I appreciate his sense of humor. He’s successfully driving the College academically and physically. He launched the PCOM Primary Care Innovation Fund and opened PCOM South Georgia. He’s been an excellent leader during this unprecedented pandemic.

“As I retire, I have to say that I have been honored to work with and for the leaders who have guided the College—and the dedicated trustees who have steered the PCOM Board over the years. So many of my colleagues have become lifelong friends.

“They say you’re only as good as the people you work with—and there is tremendous strength in our community.”

Mrs. Lafferty officially retired from the College on May 29. In appreciation for her long service, the PCOM Board of Trustees and PCOM Foundation established The Lavinia Lafferty Pet Therapy Fund. Mrs. Lafferty is a passionate pet lover; the fund will provide annual pet therapy activities on the College campuses, lifting the spirits of the community for years to come.