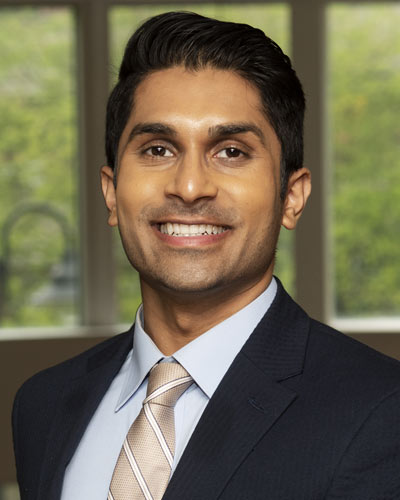 Philadelphia College of Osteopathic Medicine (PCOM) has announced that Sufyan Ahmad (DO '22) is the 2022 recipient of the Mason W. Pressly Memorial Medal. This award is presented to a student for his or her outstanding achievement and service to the College, the community and the osteopathic profession. Recipients are selected by representatives from across the College community. Mr. Ahmad will receive his award at the annual graduation dinner.

As the oldest of his three siblings, Mr. Ahmad always felt that it was his duty to carve out a path for his brother and sister. Mr. Ahmad is a first-generation American citizen who emigrated with his parents from Pakistan when he was four years old. “My parents [Muzafar Ahmad and Abida Siddiquha] worked hard to provide for our family and they never showed us kids any signs of their struggle. Now, as an adult, I can see their endless sacrifice for me and my siblings. My father, in particular, is so proud of what I’ve accomplished so far. His sacrifice of leaving everything he knew behind has paid off. It was really his selflessness that inspired me to pursue medicine and give back to others,” shared Mr. Ahmad.

While studying biology and psychology in college, Mr. Ahmad began volunteering with local physicians to learn more about medicine. His experience shadowing the physicians at his primary care doctor's office, as well as a humanitarian study abroad program in Nicaragua, solidified his decision to pursue medicine. Mr. Ahmad shared that these experiences opened his eyes to a variety of patient populations and he knew that he wanted to be a physician that worked with people from all walks of life.

During his time at PCOM, Mr. Ahmad was actively involved with a number of activities on campus. He served as a student ambassador for the Office of Admissions during his first and second year in the Doctor of Osteopathic Medicine program, as well as a student interviewer for incoming applicants. Mr. Ahmad also conducted research focused on prostate cancer with Heather Montie, PhD, associate professor of neuroscience, physiology and pharmacology in the Department of Bio-Medical Sciences.

Upon graduation, Mr. Ahmad will begin his residency in family medicine at Bryn Mawr Hospital of Main Line Health, in Pennsylvania. He is interested in many aspects of family medicine including diabetes, obesity, women's health and aesthetics. Mr. Ahmad graduated from SUNY Geneseo with a bachelor of arts in biology and psychology. Outside of school, Mr. Ahmad enjoys watching outer space documentaries, practicing meditation, exploring the city and spending time with his friends.