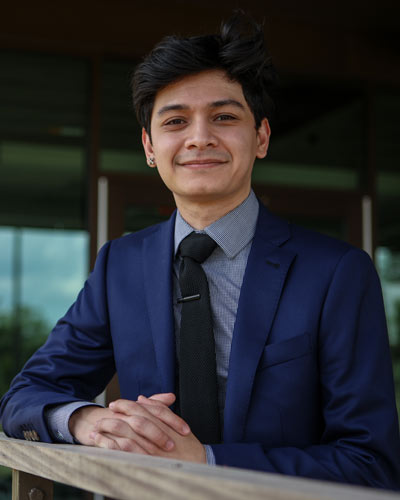 With a graduate degree nearly under his belt, Anthony Pelache (MS/BS ‘22) has sage words of advice for students following in his footsteps: “Don't worry about where you are in comparison to others. There is always going to be someone younger, or smarter, or older, or more experienced than you, and everyone will be in different stages of their lives.”

Pelache learned that advice first-hand over the last few years of his undergraduate and graduate education.

“I wanted to go straight into medical school out of undergrad, but it took me a lot of time to figure out my plan and to execute it, knowing that I needed to improve as a student while also knowing I would be losing time compared to other people I knew,” he said. “And that's okay. Nobody good will look down on you for moving forward and growing at your own pace, as long as you push yourself and continue to do so.”

During his time at PCOM South Georgia, Pelache completed his second-year concentration in forensic biology which provided him the opportunity to travel to the PCOM campus in Philadelphia once a month for his education.

“I was told about the biomedical sciences program by my friend who is currently a fourth-year medical student,” he said. “The idea of being at a new school with a program in its infancy appealed to me greatly, and I wanted to see if I would be able to handle medical school classes while also strengthening my knowledge base.”

Pelache loved science from a young age. When his mother was diagnosed with breast cancer during his sophomore year of high school, he realized the impact that physicians have on patients’ lives — from exhibiting exemplary bedside manner, to being an excellent diagnostician, to being a great leader — which solidified his desire to pursue medicine.

“He’s friendly and kind and has led by example in the way that he is always present and interactive,” he said. “This program has prepared him for his next steps, and I look forward to seeing where his future takes him.”

The Orlando native was nominated by his peers for general leadership characteristics, high academic achievement and the ability to effectively represent the class in College and community affairs, ultimately receiving the biomedical sciences leadership award which recognizes a student who has demonstrated exceptional leadership.

Pelache said his next step is to apply to medical school. Later in his career, he looks forward to teaching the next generation of medical students. “One day after working as an attending, I want to teach residents in whatever my specialty is, as I feel educating our future physicians will always be of paramount importance in the field of medicine,” he said.