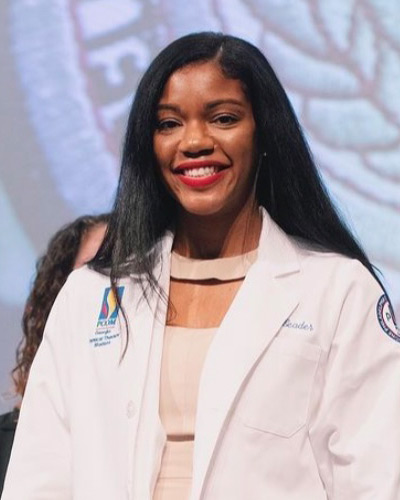 As often happens, life experiences can lead one to a certain career. This was true for Joye Leader, DPT ’21, who grew up in Americus, Georgia, in the southwest corner of the state. During her junior year of high school, she tore her rotator cuff muscles while playing in a state doubles tennis tournament and was forced to forfeit the match. Having considered herself invincible, discouragement set in after her physician prescribed physical therapy to strengthen her shoulder muscles and help her regain her range of motion. Surprisingly, she was able to return to tennis her senior year even stronger due to the prescribed exercises.

Fast forward a few years later when Leader was a senior at Spelman College, an historically black liberal arts college for women in Atlanta. Her boyfriend, now husband, tore his anterior cruciate ligament while playing basketball at Georgia Tech and underwent arthroscopic surgery. While undergoing three months of physical therapy, he initially struggled with confidence in himself and the desire to continue the sport. His attitude quickly changed once he began his orthopedic rehabilitation sessions.

“He came back from each session more encouraged and confident in his full recovery,” Leader recalled, noting that he spoke of the conversations he and his therapist had about life. “This exposed me to the mental and emotional benefits that physical therapy can have on a patient,” she said.

She chose the physical therapy profession after closely observing that it gave her the opportunity “to get to know my patients on a more personalized level, while helping them recover their strength so that they can return to their chosen sport or activity pain free.”

“Many individuals are unaware of the simple items and basic movements that can be used to strengthen the body at home. My overall goal is to use physical therapy to transform and improve the lives of others.”

Leader is inspired by her late mother. “She instilled in me at an early age that I could achieve any goal that I set for myself.” The same year Leader experienced her tennis injury, her mother was diagnosed with cancer and later passed away.

Aside from enjoying sports, Leader is a talented musician. She used her musical skills to play alto, tenor and baritone saxophone in college where she was a member of the Spelman College Jazz Ensemble. She earned a Bachelor of Arts in Economics and then earned an MBA in General Management from Troy University, Troy, Alabama.

Leader returned to Atlanta to attend PCOM Georgia because it “mirrored my own values. PCOM’s commitment to diversity, while also taking a holistic approach to health care, strongly appealed to me,” she said.

Just a few days away from commencement, Leader encouraged future students to “work hard and never give up,” advice that has helped her achieve her dream of becoming a physical therapist.