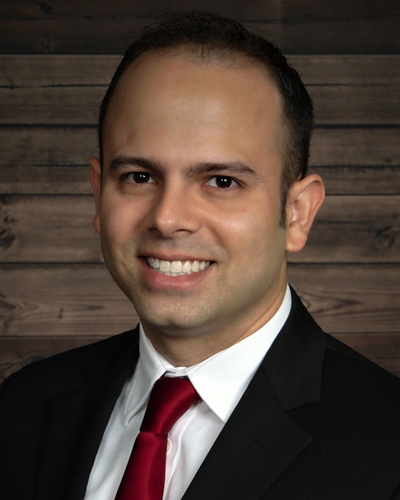 Born and raised in Puerto Rico, Efrain Padilla, DO ’20, discovered his passion for medicine after volunteering alongside his wife at Flagler Hospital in St. Augustine, Florida. “I realized how much I valued making a direct impact in people’s lives,” Padilla said.

He decided to follow his father’s advice—“Aim as high as possible. For me, that was medical school and eventually surgery,” he said.

Armed with a mechanical engineering degree from the University of North Florida in Jacksonville, along with several years of engineering work, Padilla chose Philadelphia College of Osteopathic Medicine (PCOM) because “it is renowned as the best DO school.” The Suwanee campus was close to his family, and it is where his wife was accepted a year ahead of him.

“In deciding where we would apply, I researched schools,” said Padilla. “PCOM was always at the top of DO schools, and we wanted to stay close to family in the south.”

He considers himself “extremely fortunate, first, to have the privilege of attending medical school, and now, to have matched into a surgery residency program.”

With plans to practice in either Florida or Puerto Rico, he advises new and prospective medical students: “Aim as high as your abilities will take you—the only way to find out is to push yourself. Take other people’s advice, especially those who are older and have already gone through what you wish to accomplish. When things get bad, use it as an opportunity to learn and improve.”