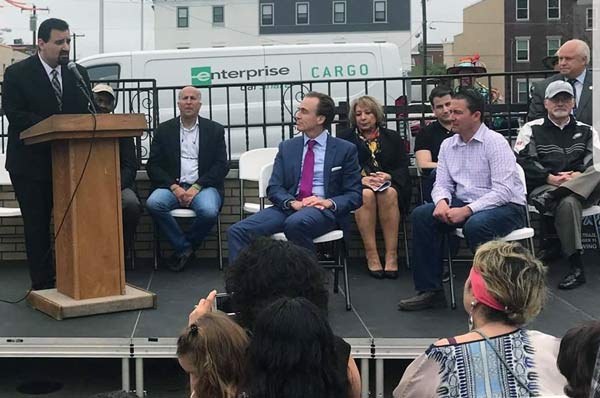 David Truscello (DO ’18) has both politics and medicine in his blood; one grandfather was a city councilor, the other was a district judge.

Several members of his family are physicians—including his aunt, Adele Lam, DO ’99, and uncle, James Tayoun Jr., DO ’90, who both went to PCOM.

“My uncle James, who is a surgeon, ran for state Senate in 2004 to advocate for his profession and to ensure his success and the success of other doctors,” said Mr. Truscello. “I really admired that.”

Mr. Truscello himself has served as an appointed committeeman in his South Philadelphia community for several years. In his role, he canvasses neighborhoods to help get out the vote, gives voters information, directs them on where to go and provides a litany of other services to constituents.

“In a way, it’s very similar to being a physician—you work long hours because you care, and you want to be helpful whenever you can,” he said.

He also works with the Pennsylvania Medical Society, meeting regularly with legislators to advocate for health care and for the medical profession. (State Sen. Sharif Street has said he hopes Mr. Truscello “opens up an office in my district one day.”)

Mr. Truscello says it’s imperative for physicians to have a seat at the table to discuss healthcare legislation.

“When your car breaks down, you don’t take it to a lobbyist or a lawyer, you take it to a mechanic because he’s the first line of defense,” said Mr. Truscello, who will be starting an internal medicine residency at Rowan University School of Osteopathic Medicine. “When your body breaks, you take it to a doctor. That's why its imperative for physicians to have a say in how healthcare is administered and legislated at every level of government."

Ultimately, he feels that getting involved in politics can make for more effective doctors.

“At the end of the day, patients need to come first, and by advocating on a political level we can ensure better care for them and better working conditions for us,” he said.