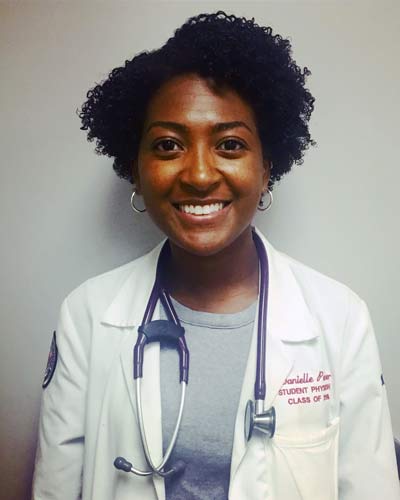 For Danielle Parker (DO ’18), the path to PCOM and medicine has been one full of twists and turns.

As an undergraduate at Binghamton University Ms. Parker was already studying biology, but after volunteering at a telephone crisis center, she found that she enjoyed talking to people and trying to help them through a crisis. She found that medicine would allow her to combine that enjoyment with her science background.

“I’ve always liked to work with my hands,” says Ms. Parker, “and learning osteopathic manipulative techniques (OMM) allows me to do that. The osteopathic philosophy taught me to really value the musculoskeletal system and that there are gentle, non-invasive treatments for pretty common complaints that really help people. All they require is the use of your hands."

Ms. Parker was able to use her knowledge of OMM during a medical mission trip to India for two weeks in the summer between her first and second year. She and 10 other classmates, along with OMM fellow Christopher Mulholland, DO ‘17 set up an OMM clinic in a local temple for expectant mothers. The group would perform osteopathic manipulative techniques on the women to reduce their strain or discomfort secondary to the significant structural changes the body undergoes throughout pregnancy and also showed patients’ husband techniques they could use at home.

“I was completely outside of my comfort zone,” said Ms. Parker. “We were literally halfway across the world in a place with a serious language barrier, and being mindful of brand new cultural and societal norms. But by the end of the two weeks we had really built a great relationship with them and it was hard to say goodbye."

After graduation, Ms. Parker will go to Aria-Jefferson in Philadelphia for a residency in emergency medicine. She is the first physician in her family.

“I didn't quite figure out I wanted to pursue emergency medicine until pretty late into my third year,” she explains. “But I really felt like I fit in with the people in the emergency room and I love all the variety it offers. I like the idea of never knowing what's going to come at you next, so I’m really excited to start my training."