Christopher Gable and Adam Kardon
DO '18 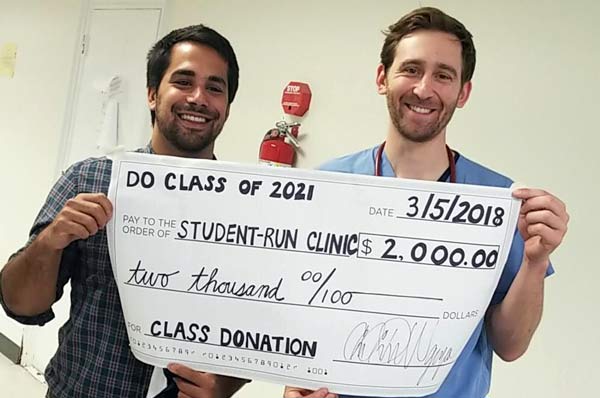 Christopher Gable and Adam Kardon have always had a passion for helping the underserved. They say it was one reason they chose to go into medicine.

Two years ago, Mr. Gable and Mr. Kardon embarked on a project to do exactly that: in 2016, they established the Student Run Homeless Clinic, a group of students that volunteer their time at local shelters to ensure residents there get the care they need.

They began at St. Barnabas Women’s Shelter, and earlier this year the Clinic project expanded to a second location at Families Forward—the largest emergency shelter for families in Philadelphia.

At each site, students see residents with health issues ranging from cardiovascular disease, to diabetes to rashes and colds. Students meet with residents as they enter the clinic and get a brief health history, and then each resident is seen by one of PCOM’s family medicine physicians. Students then perform an exit interview to refer them to a primary care provider nearby.

Students at the clinics also serve as advocates for the residents to help them overcome barriers to health care—putting them in touch with Medicaid, or with a pharmacy, or helping them work out transportation issues to and from doctors’ visits.

“We’re meeting people in need where they are, to try and remove as many barriers to care as possible,” said Mr. Kardon. “We take that osteopathic philosophy of looking at the whole person and apply it here. The advocacy committee is a big part of that.”

Mr. Gable adds that there is a significant educational component to the clinics as well. “First- and second-year students are getting first-hand exposure to underserved, low-income patients, which is not a population they would normally see,” said Mr. Gable, who will begin his residency in pediatrics at Nationwide Children’s Hospital in Columbus, Ohio. “They’re seeing all the issues, health-related and otherwise, that go along with that.”

Mr. Kardon and Mr. Gable are proud of the Clinic and the work the students are doing there, and are excited to see how it progresses after they leave. “We’ve left it in amazing hands, with students who are working to expand it in ways we didn’t think possible,” said Mr. Kardon.

The two hope to see the clinic expand to even more locations, and bring in healthcare providers from other fields such as dentistry and psychology.