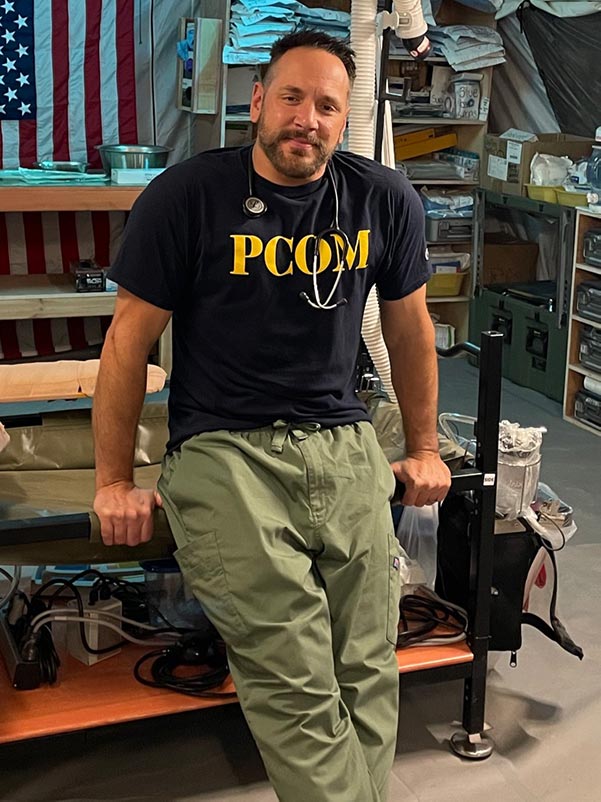 “I was probably being a bit naive, but I never worried much about impending threats or doom.”

Robert Bassett, DO ‘06, FAAEM, FACEP, FACMT, clinical assistant professor in the Department of Emergency Medicine at Philadelphia College of Osteopathic Medicine (PCOM) and a lieutenant colonel in the U.S. Army Reserves, shared these feelings as he reflected on his recent station overseas. He had been in combat zones before, completing a tour in Iraq as part of Operation Iraqi Freedom and receiving several Army Commendation medals.

His latest deployment at a small combat outpost in Syria was a three month tour as part of a FRST, or forward resuscitative surgical team. At the time of his deployment in fall 2021, the region was experiencing relative calm with very little kinetic activity, or active combat, providing an opportunity to more closely engage with the local community. 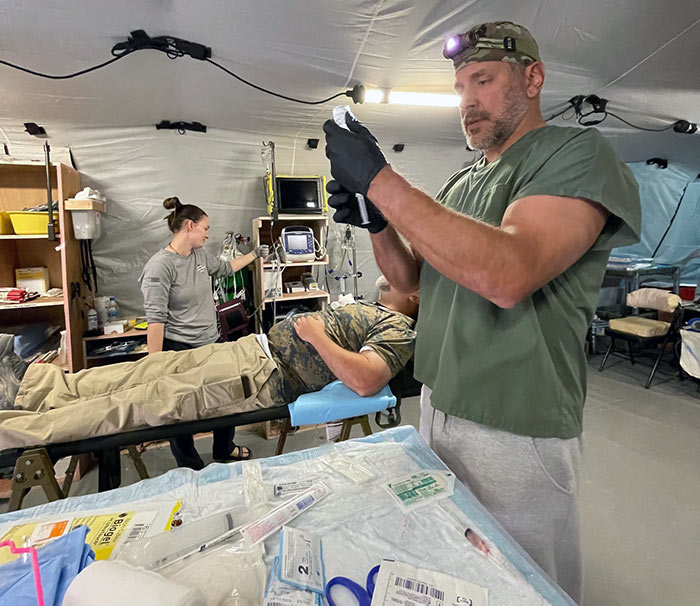 Accompanying U.S. Infantry units and the Syrian Democratic Forces (SDF) on routine patrols, Dr. Bassett’s team would provide basic medical care to the local communities outside the base. “Partnering with the infantry helps support efforts to engage with the local communities,” said Dr. Bassett. “People develop trust when they’re being examined by a doctor.”

The team was approached with everything from back aches and burns to kidney stones, though orders and logistical challenges limited the type and scope of care they could provide. Many of the conditions they saw couldn’t be quickly remedied or treated with basic care. “It can be hard to effect long term change, especially at the population level,” said Dr. Bassett. “But even minimal basic care can ease suffering and engender goodwill.”

Aiding Bassett and his team in their efforts, however, was equipment on loan from PCOM. “The equipment we used helped train both American medics and soldiers from the SDF,” said Bassett. “PCOM, and specifically the Department of Emergency Medicine, generously provided simulation training equipment that was instrumental in enhancing the readiness and confidence of U.S. military medics as well as our SDF partners.”

Osteopathic medicine has deep roots in the military, and Bassett is grateful for the support he has received from both the College and the close knit military community on campus. “PCOM’s staunch and steadfast commitment to military medicine is an enduring source of pride for me as both faculty and an alum.”

Though he is glad to now be back home, Bassett has pride in the work he did in Syria, “It was a daily reminder of the impact of conflict,” he said. “Working closely with the local populace dispels the anonymity and stigma that are often associated with opposing forces. You can't help but be reminded of the commonality in the human condition that transcends race, ethnicity, and most certainly geography.”