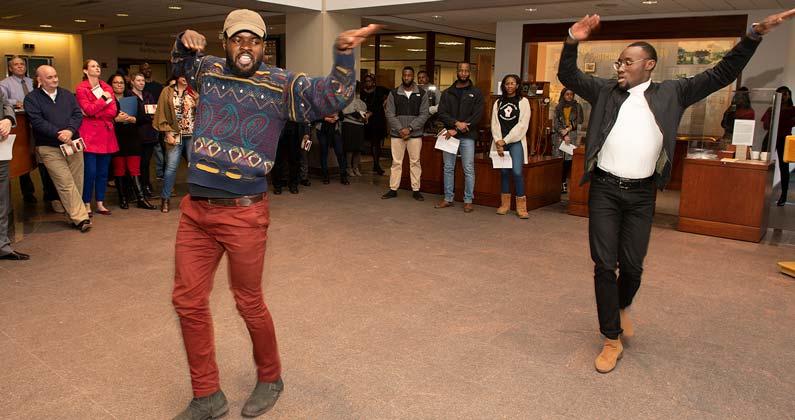 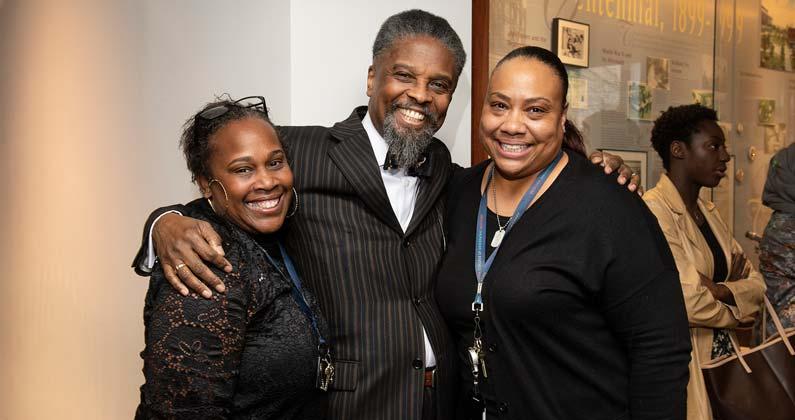 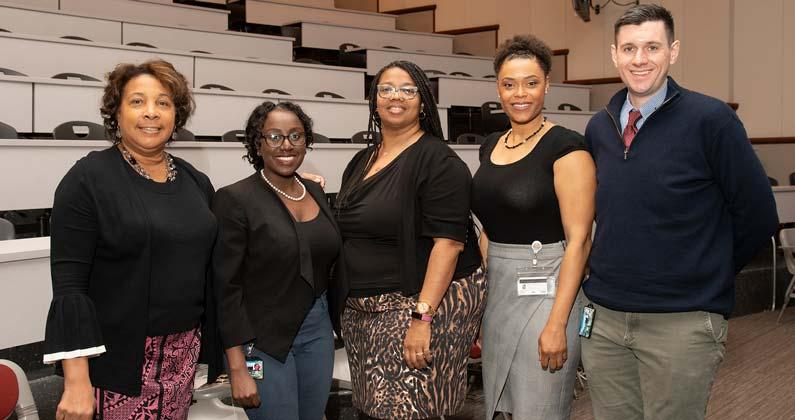 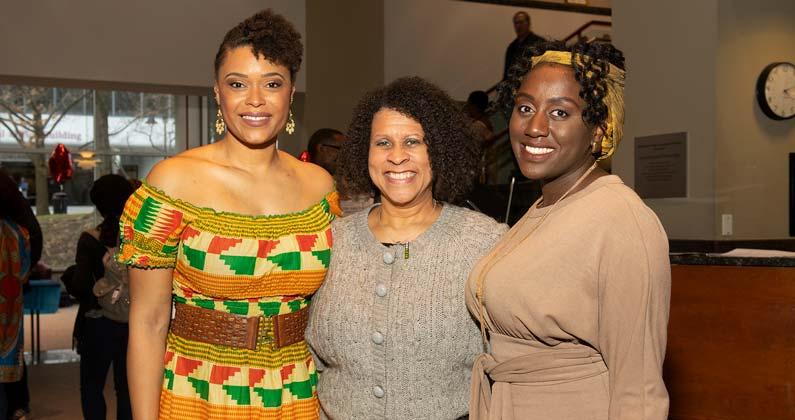 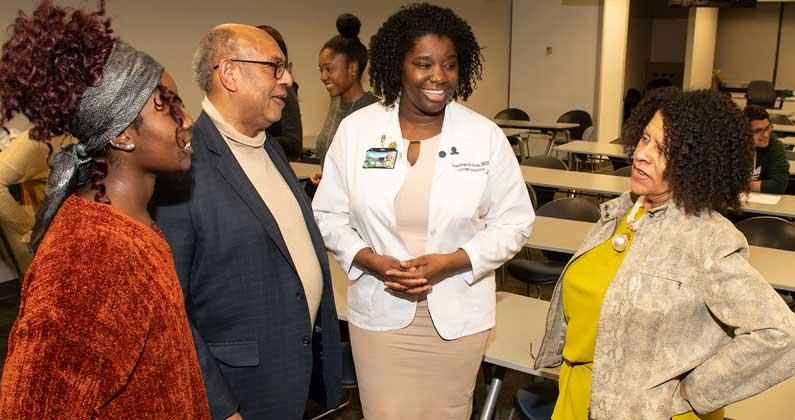 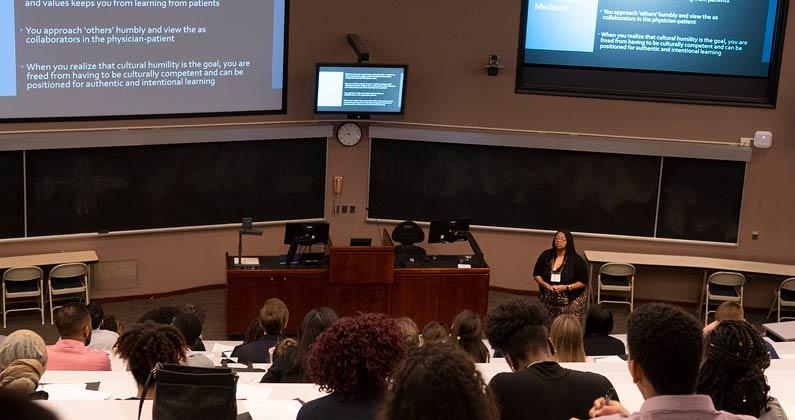 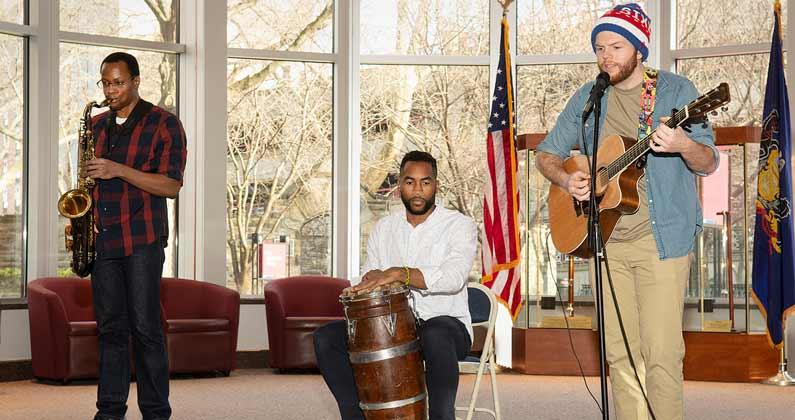 In February, Philadelphia College of Osteopathic Medicine (PCOM) marked Black History Month and the contributions of black osteopathic medicine physicians with a host of events.

On February 8, the PCOM chapter of the Student National Medical Association (SNMA) and the offices of Admissions, Diversity and Community Relations and Student Affairs, sponsored an event to mark the start of Black History Month and honor the contributions of PCOM’s African-American alumni. The well-attended event featured spoken word, dance and musical performances, and a keynote from alumna Monique Gary, DO '09, who in her speech honored the legacy and work of former board member Leonard Johnson, DO ’64. Dr. Johnson was the 2003 recipient of PCOM’s OJ Snyder Memorial Medal, and in 2014, his portrait was hung in Evans Hall as a testament to his commitment to the students and patients whom he served.

On Tuesday, February 12, the Office of Diversity and Community Relations and the SNMA sponsored a conversation with Deneen Hendrick, DO ’90, to commemorate the legacy of Meta Christy, DO ’21—the first African-American graduate from PCOM and the nation’s first African-American osteopathic physician. Dr. Hendrick, coordinator of pre-health studies at Rowan University and former clinical assistant professor of pediatrics at PCOM, discussed with attendees her own professional journey.

Throughout the month of February, a list of prominent African-American alumni from PCOM was displayed in the lobby of Evans Hall to honor their accomplishments. In addition to Dr. Christy, other notable black alumni include Ethel D. Allen, DO ’63, the first African-American elected to an at-large seat in the Philadelphia City Council, and Danielle Ward, DO ’18, who was the first DO student to head the national SNMA.

Also in February, the Cultural Competency Program (CCP)—a collaboration initiated by the SNMA among student groups* across PCOM that addresses the impact of culture, race, religion, ethnicity, gender and socioeconomic status on patient care and the healthcare system—held the inaugural Cultural Humility and Medicine Symposium at PCOM.

The event, open to all medical students from schools across the region, explored the social issues which fuel discrimination, bias, and neglect within the healthcare system. The day featured lectures and breakout sessions on topics such as poverty, religious practices, patients with disabilities, provider perception of pain, African-American maternal mortality and trauma informed-care. Roughly 75 students from PCOM, Rowan School of Osteopathic Medicine, Lewis Katz School of Medicine at Temple University and Drexel University College of Medicine attended.

“It was our hope that we could contribute to increasing awareness among our peers, to increase cultural humility and demonstrate that together we can eliminate bias, disparities, and neglect,” said Chantel Thompson (DO ’21), co-president of SNMA at PCOM and program chair for CCP.

Also on display throughout the month was an exhibition of paintings in Evans Hall done by local artist Stephanie Boateng, who said her paintings “are about celebrating the beauty of black people, our features and expressions.” The exhibition was curated by Megan Aidoo (DO ’21) and Ms. Williams in admissions.

“Events like those we held for Black History Month speak to the unique experience of both the African-American physician and patient in the U.S. healthcare system,” said Dr. Pickron-Davis. “Exposing everyone to those experiences and viewpoints will make our students better physicians, able to treat all patients with compassionate care, and better colleagues and members of the profession as well.”