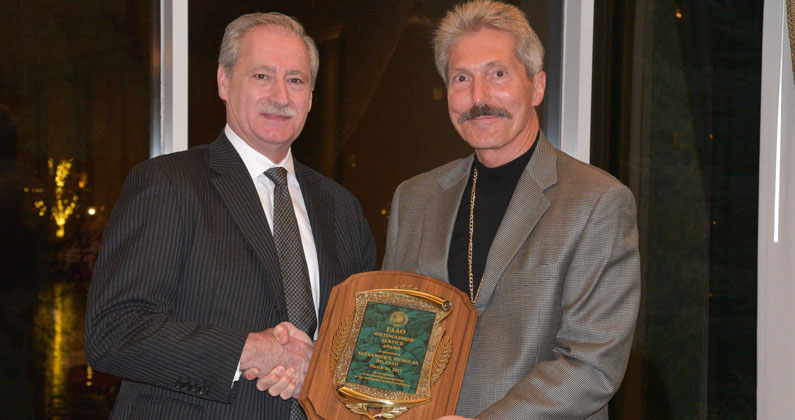 Alexander S. Nicholas, DO ’75, professor and chair, OMM, recently received the Distinguished Service Award from the Committee on Fellowship in the American Academy of Osteopathy (AAO) at the Academy’s annual Convocation. Dr. Nicholas has chaired the College’s Department of Osteopathic Manipulative Medicine since 1987.

After completing a general internship at the hospital of the Philadelphia College of Osteopathic Medicine in 1976, Dr. Nicholas took over his father’s osteopathic general practice in Upper Darby, Pennsylvania. His father, Nicholas S. Nicholas, DO, FAAO, a former president of the AAO, was limiting his time in private practice so he could chair PCOM’s Department of Osteopathic Principles (OPP).

In 1976, Dr. Nicholas also joined PCOM’s OPP department on a part-time basis. The following year, he was asked to join the department full-time as an assistant professor. Dr. Nicholas has taught thousands of osteopathic medical students, and in 1996, he was honored with the Lindback Award for Distinguished Teaching.

Along with his father and David Heilig, DO ’44—a colleague and mentor—Dr. Nicholas developed the first residency in osteopathic manipulative medicine (now osteopathic neuromusculoskeletal medicine). Walter C. Ehrenfeuchter, DO ’79, professor, OMM, GA-PCOM, was the first resident in the field.

Dr. Nicholas has published a number of articles in scientific journals, and most recently, he and brother Evan Nicholas, DO ’81, associate professor, OMM, published the Atlas of Osteopathic Techniques, now in its third edition. Published in seven languages, the text is used by many American osteopathic medical schools as well as the German American Academy of Osteopathy (DAAO) in the courses sponsored in Germany by the DGMM/MWE. Dr. Nicholas is the honorary president of the DAAO, and he also has taught extensively in Austria with the manual medicine college of physicians (OAMM).

In 2014, Dr. Nicholas was awarded the Andrew Taylor Still Medallion of Honor, the AAO’s highest honor. He continues his work with patients, students and colleagues in the United States and abroad.

The Fellow of the American Academy of Osteopathy (FAAO) Distinguished Service Award is presented to fellows who have distinguished themselves in contributions to osteopathic literature; development of osteopathic theories, methods or procedures; research; osteopathic education; service to the AAO; public relations; service to public health; or osteopathic medical economics and advocacy.