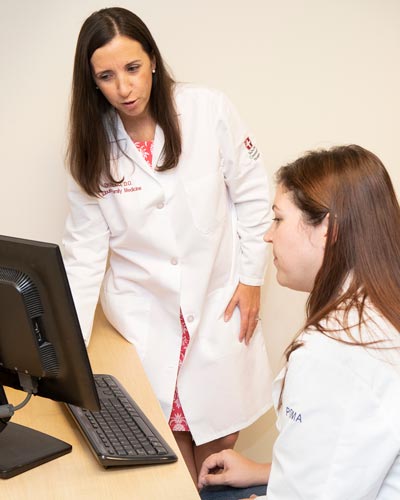 A poll recently conducted by the Associated Press—NORC Center for Public Affairs Research found that about 60 percent of Hispanic adults have had difficulty communicating with their health care provider due to language or cultural barriers.

Philadelphia College of Osteopathic Medicine (PCOM) is working to train future physicians to bypass some of those barriers as part of a new elective course on medical Spanish. The online course for third and fourth-year Doctor of Osteopathic Medicine (DO) students is designed to teach participants not only common words and phrases but also a better understanding of some of the cultural aspects that can play a role in a Spanish-speaking patient’s health.

“There have been studies that demonstrate the existence of racial and ethnic disparities in healthcare,” said Beth Vitucci, DO ’10, course director for the Medical Spanish elective and director of osteopathic education at Suburban Community Hospital in Norristown, Pennsylvania. “This course not only teaches medical Spanish but also helps prepare students to become culturally competent physicians.”

The online course, which was the initial idea of alumna Anne Marie Kennedy, DO ’16 (then a student), features 36 lessons in total through which students learn not only vocabulary and grammar but also listening skills, in the form of video vignettes or “telenovelas.“ Students are tested throughout the course on their written and listening skills, and at the end participate in a virtual patient encounter with a standardized patient (SP).

“The online encounter is setup like a Skype call, and I speak with each student at the beginning to orient them to the process, and then we have an all-Spanish encounter,” explains SP Stephen Lopez. “As a patient, we discuss my history and symptoms, and then the student creates a treatment plan for me.”

Since its launch in 2017, the Medical Spanish elective has had roughly 200 students participate from both the Philadelphia and Suwanee campuses. Overall, students have responded positively to the elective, and some say it has helped them as they begin to see patients in a clinical setting.

Amanda Scott (DO ’19) said that she realized how helpful the course could be while on a sub-rotation in PCOM’s Family Medicine program.

“I saw a patient who had diabetes and spoke only Spanish,” said Ms. Scott. “He had moved to the U.S. but didn’t understand that his medication never transferred over, so he wasn’t taking anything to manage his diabetes. I was able to explain to him why his insulin was so important and how to check his blood sugar.

“When these patients come to see you, they’re already nervous and vulnerable and they don’t understand what you’re saying,” she continued. “But once you can speak to them in their own language, you can see them relax physically. As a physician, you can miss so much without that connection.”

Dr. Vitucci says she and the team in the Office of Clinical Education—including Michael Becker, DO ’87, MS, assistant dean of clerkship education, and Aileen McGuigan, interim program manager—are looking to expand the popular program. A specific goal is to hire more Spanish-speaking SPs so that the virtual patient encounters can be brought onto campus.

“Right now these are done online, which is helpful for our third- and fourth-year students who are taking clerkships all over the place,” said Dr. Vitucci. “But eventually we want them to come back to campus. That way, the encounter takes place in a more realistic situation where students are physically examining the patient using their medical Spanish skills.”