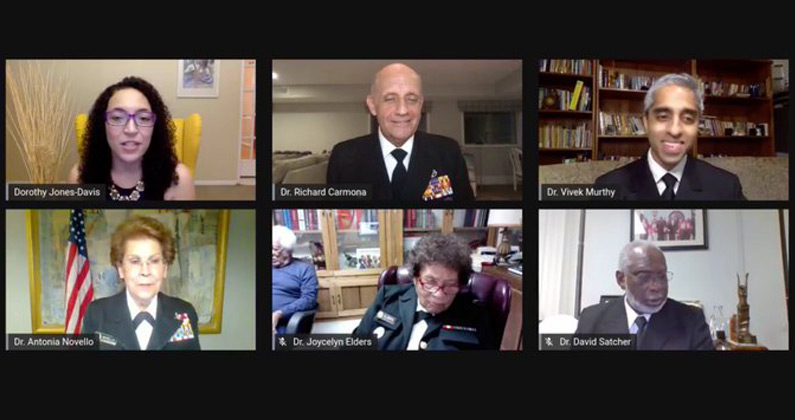 After screening a film on race and health care, five former U.S. Surgeons General participated in a roundtable Q&A.

On Thursday, September 23, Philadelphia College of Osteopathic Medicine’s (PCOM) Office of Diversity and Community Relations sponsored a two-part event focused on equity in access to healthcare during the COVID-19 pandemic. The first part of the event featured the debut of Open Season: Racism and Health Disparities, The Two Deadliest Diseases in America, directed by Crystal R. Emery. The second part of the event included a roundtable discussion with five former US Surgeons General. The event was hosted by the TCU and UNTHSC School of Medicine.

“The presentation of this film and discussion with the Surgeons General are incredible opportunities for our students, and medical students everywhere, to better understand the insidious nature of health care disparities and to acquire skills to grow beyond them,” said Stuart D. Flynn, founding dean of the TCU and UNTHSC School of Medicine, which is a presenting partner in the panel discussion. “The more light that we can shine on these issues, the more we can empower change, forging us closer to building a system that is fair and equitable for all.”

The panel discussion was moderated by Dorothy Jones-Davis, PhD, founding Executive Director of Nation of Makers, a nonprofit that helps America’s maker organizations through community building, resource sharing and advocacy. The five former U.S. Surgeons General who participated in the roundtable Q&A included:

Open Season: Racism and Health Disparities, the Two Deadliest Diseases in America was produced by URU, The Right to Be, Inc., a nonprofit organization that uses multimedia solutions at the intersection of the arts, humanities, science and technology to move all stakeholders toward a more equitable and humane world.

Learn more about the film The Deadliest Disease in America.