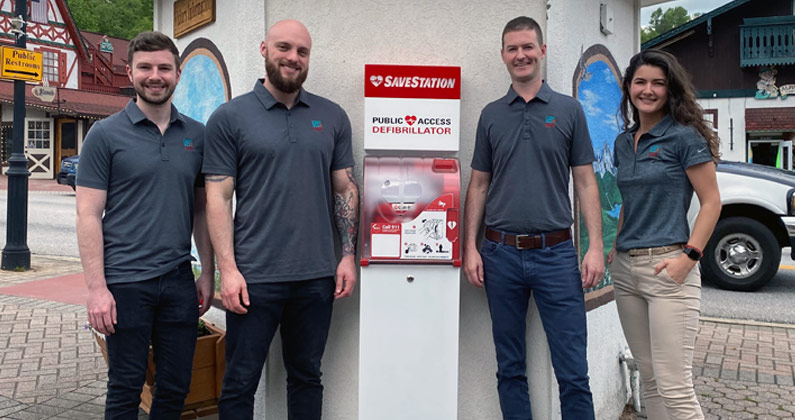 The Student Docs for Shocks nonprofit works to install AEDs in public spaces as well as raise awareness on sudden cardiac arrest. This photo was taken prior to mask mandates.

The organization accomplishes its mission through public awareness, cardiopulmonary resuscitation and automated external defibrillator (AED) training, and the donation and placement of public access defibrillators in gathering areas.

To date, AED donations and placements have been made on Main Street in Helen, Georgia, in the Duluth Festival Center and Town Green in Duluth, Georgia, in the Treehouse Learning Center in Belle Glade, Florida, and at The Works in the upper Westside of Atlanta.

In addition, the group will participate in Suwanee Fest on September 18 and 19 with an educational booth, CPR demonstrations and instruction, and an AED raffle fundraiser in which the winner could either use the device personally or donate it for use in a public place.

Doctor of Osteopathic Medicine (DO) student Chris Griesser (DO ’23), a former paramedic in Philadelphia prior to being accepted to medical school at PCOM Georgia, was the instigator of the Georgia not-for-profit organization. He serves on the board of a Philadelphia area-based nonprofit known as Aidan’s Heart Foundation, which he says is “like-minded, but more robust with their mission.”

In forming the organization, Griesser said he decided on a narrower mission based on historically poor survival from OHCA, which occurs more than 350,000 times per year in the United States.

He explained, “The time between OHCA onset and initial treatment with CPR and an AED is critical to survival, specifically the first three to four minutes. If an OHCA victim is not treated during that time, the chance of survival is extremely low.”

He added, “Survival from OHCA is around 10% and stems from failure to quickly perform CPR or use an AED as EMS, police and fire are likely not going to arrive in that timeframe. We will not improve survival without the public’s help, and the public can’t help without the proper tools. Hence, our mission.”

Co-founder Sara Lezcano (DO ’23) said that Student Docs for Shocks not only benefits the community, but also benefits medical students.

“Many medical students are fresh out of undergraduate programs,” she said. The group plans to create a framework that will attract first and second year medical students from a cross section of medical schools. “These satellite chapters will operate autonomously, but within the bounds of the organization’s mission,” she said.

Griesser noted that the group’s goals include providing an opportunity for each generation of medical students to learn about volunteerism, fundraising, budgeting and prehospital resuscitation, all while providing the means to improve cardiac arrest survival through AED donations.

Student Docs for Shocks has been incorporated and registered as a nonprofit organization with the Georgia Secretary of State and has been granted 501 (c) (3) tax-exempt status with the Internal Revenue Service.

Griesser said the founding members will serve on the Board of Directors indefinitely to ensure the organization remains mission-driven as growth occurs.

Aside from Griesser, and Lezcano, founding members include Rex Burch (DO ’23) and Tyler Richie (DO ’23).