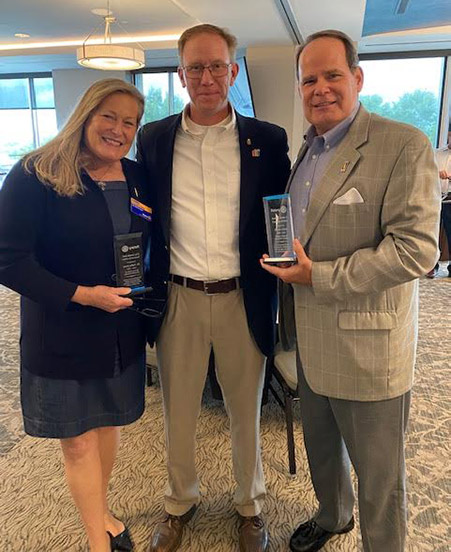 Chief Campus Officer Bryan Ginn, Jr., was recently named the recipient of the Robert S. Stubbs II Guardian of Ethics Award by the Rotary Club of Gwinnett for the 2020-2021 year. This award identifies a Rotarian who exemplifies the attributes, as well as a passion for ethics in his or her vocation, business and personal life.

Ginn said, “Of the multiple awards a local Rotary club presents to members each year, the sentiment behind this award means more to me than folks would ever begin to know, understand or appreciate. The caption on the award reads, ‘In recognition of your outstanding contributions that strengthen and foster the development of ethics.’ I am very grateful for this recognition.”

The Rotary International award was established to encourage and promote ideals of ethics in all vocations in District 6910, which is made up of 71 Rotary clubs. According to the District website, the recipient must have made outstanding contributions that foster the development of ethics. In addition, the awardee must have made significant contributions in his or her vocation and by his or her actions.

Prior to joining PCOM Georgia, Bryan served at the Medical College of Georgia at Augusta University as the vice president for external affairs and government relations, the vice president of advancement, and the chief of staff to the president. He previously served Kennesaw State University and Georgia Southern University in external affairs positions. He also served on the staff of a member of the US Senate and the US House of Representatives, both elected officials from Georgia.

For more than 20 years, Bryan has been a member of an influential, yet informal group of higher education lobbyists in Georgia. According to Mark Sanders, an attorney and founder of Sanders and Associates, a comprehensive government relations and public affairs practice, “We depend on Bryan for his wisdom and insight. Working with legislators, he is consistently forthright, truthful and can be counted on to present all perspectives of an issue. The respect that he has garnered from his peers and elected officials makes him among the most reliable and trusted resources serving at the state Capitol.”

Ginn assumed the chief campus officer role at PCOM Georgia in the fall of 2012. A member of the PCOM President’s Cabinet, Ginn’s responsibilities include coordination of campus operations with the institution’s senior leadership in Philadelphia, academic program expansion, and a directed focus on external relations, community affairs and government relations. He is a graduate of Leadership Gwinnett, as well as Leadership Georgia and several other leadership programs in the state.

Ginn said, “I am honored to be included in such a presentation where Dr. Arona was noted for her dedicated "Service Above Self" – her recognition is so richly deserved. I can only hope this, in some small measure, reflects favorably on PCOM and PCOM Georgia.”