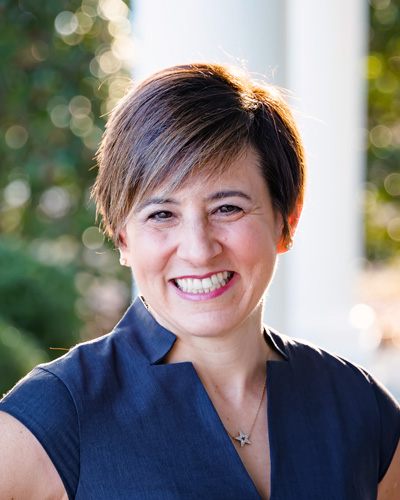 Andrea Pax Mann, DO, FAAP, has been named the dean and chief academic officer of the Doctor of Osteopathic Medicine (DO) program at PCOM Georgia effective this spring. In this position, she will direct and oversee the activities of the Clinical and Bio-Medical Sciences departments, as well as deliver policy and curriculum as required by the Philadelphia College of Osteopathic Medicine president, provost and board of directors.

Provost Kenneth Veit, DO ‘76, MBA, said, “We are very pleased to welcome Dr. Mann to Philadelphia College of Osteopathic Medicine. Her depth of experience in academic medicine, administrative leadership and as a physician practitioner will prove beneficial as we continue to move PCOM Georgia forward.”

Dr. Mann is well qualified for this position, having most recently served as the assistant dean for clinical education, chair of pediatrics, and associate professor of pediatrics and internal medicine at the Jerry M. Wallace, Campbell University School of Osteopathic Medicine, Buies Creek, North Carolina. She has 20 years of experience in academic medicine with close to five years at the dean’s level with a record of accomplishment as a leader, administrator, educator, innovator, mentor and advisor.

Dr. Mann describes herself as “a solid, flexible, optimistic, and introspective leader who is approachable and never backs down from a challenge.” Her style is to “empower and encourage people to become the very best versions of themselves.” She said, “With the ever-changing climate in the world and medicine, I feel it is important to consistently work to remain current and to set a new high standard for medical education.” She has received several teaching awards and was elected by students to carry both the gonfalon and the mace, positions of honor, at Campbell University’s commencement ceremonies.

She said, “Serving the underserved is fundamental to my core belief as a servant leader and as a physician. My true commitment lies in not only contributing to the shaping of physicians who are exceptionally competent and knowledgeable, but also who are compassionate, empathetic, and deeply care for and understand the whole patient.”

Dr. Mann is a graduate of Mount Holyoke College in South Hadley, Massachusetts, where she received a Bachelor of Arts degree in English with a minor in Biology. She earned a Doctor of Osteopathic Medicine degree from Lake Erie College of Osteopathic Medicine, Erie, Pennsylvania, in 1999, and completed an internal medicine and pediatrics residency in 2003 at MetroHealth Medical Center in Cleveland, Ohio, her hometown.

Prior to her role at Campbell, Dr. Mann worked as an attending physician at Senders Pediatrics, South Euclid, Ohio, a 10,000 patient private practice, where she supervised residents, medical students, nurse practitioners, registered nurses and medical assistants, and was listed as one of  Cleveland Magazine’s Top Doctors in 2011 – 2014. She also worked as an attending internist and pediatrician at MetroHealth Brooklyn Medical Group, Brooklyn, Ohio, where she practiced in a hospital-affiliated urban community health clinic. She was a research assistant at Case Western Reserve University, Cleveland, Ohio, where she conducted bench research on Alzheimer’s disease in the department of neurology and co-authored two journal articles.

In addition, she served as a standard setting panelist for the humanistic and biomedical domains for the NBOME COMLEX-USA, Level 2 – PE. She has participated in the Administrative Leaders Development Program of the American Association of Colleges of Osteopathic Medicine, received the 2020 Clinical Faculty Award as nominated by the class of 2020, and the Faculty Award for Teaching Excellence, both at Campbell University.

An active volunteer, Dr. Mann has participated in community service activities including acting as a physician facilitator and camp counselor at a camp for grieving children in Morehead City, North Carolina, and as a medical director for MedFest for the Special Olympics in Morrisville, North Carolina.

She is married to Brian Mann, MS, PA-C, who has been named Chief of PCOM Simulation Operations, a position that will report to the provost and serve all three PCOM campuses and multiple healthcare professional programs. Further information regarding his role is forthcoming.

The Mann’s have two children, Benjamin, a collegiate Division II swimmer and scholar-athlete, and Mackenzie, an internationally ranked CrossFit athlete, a high school honors student and an aspiring physician.  Dr. Mann enjoys spending time with her family, playing with the family’s three goldendoodles, participating in CrossFit with her daughter, sports photography, and watching her children compete in sports.