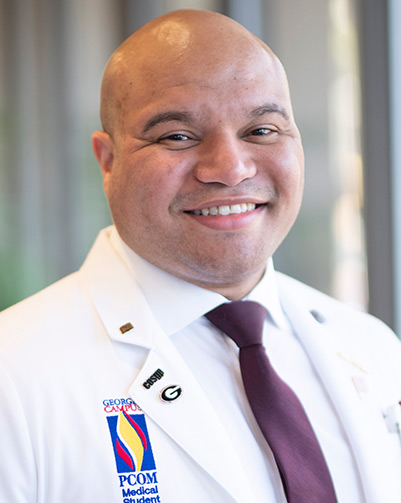 Abdul Walters, MS/Biomed ’16 (DO ’20), has been named the PCOM Georgia recipient of the Mason Pressly Memorial Medal, the College’s highest student honor which recognizes outstanding achievement and service to the College, the community and the osteopathic profession.

The award will be presented to Walters, who was selected by representatives of the College community, at the Commencement Dinner Dance to be held May 20, 2020 at the Infinite Energy Center in Duluth. He will graduate from PCOM Georgia with a doctor of osteopathic medicine degree on May 21, 2020.

Walters has been a part of the PCOM family since 2014 when he matriculated into the Biomedical Sciences program, earning a Master’s degree. He had earned a Bachelor of Arts and Foreign Languages degree from Augusta University and a Bachelor of Science degree from the University of Georgia. A UGA professor advised him to explore PCOM Georgia.

Walters has been highly involved in campus activities during his six year tenure. He served as president of PCOM FIT, co-founded the Latino Medical Student Association, volunteered as a camp counselor for Camp Neuro and the Opportunities Academy, worked as a tutor for fellow classmates, was a member of the President’s Diversity Council, and served as a peer facilitator for the campus’ Summer Bridge COMLEX review course.

In 2017, Walters was the recipient of a $1,500 Welch Scholar Grant which is given to one student at each college of osteopathic medicine or branch campus by the American Osteopathic Foundation Board of Directors. The award recognizes outstanding academic achievement, participation in extracurricular activities, a strong commitment to osteopathic medicine and financial need.

Despite his many achievements, he said, “My greatest accomplishment at PCOM Georgia was and still is the bonds that I have formed with peers, professors, mentors and staff.”