William Gilhool, DO
125 Years Through 125 Stories

As told by Kristen Berry, DO '00, Assistant Professor, Department of Family Medicine 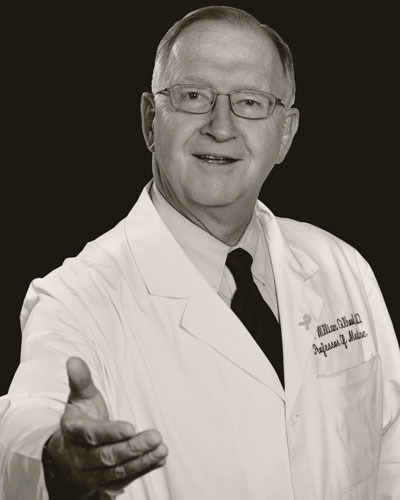 ”I’ve been at the Lancaster Healthcare Center now for going on 19 years. When I first came, in 2003, Dr. Gilhool was one of the doctors here, and working with him was just such a pleasure. He is a great doctor, with a really good bedside manner. He’s been retired for three or four years, and the patients still want to know how he’s doing. … He was originally a gastroenterologist, and you don’t always see a specialist who is able to transition back to primary care. For him, it was a no-brainer. … Dr. Gilhool is very down to earth, very personable. He is probably the best storyteller I’ve ever met. Students would gather around and listen to him talk about his hospital days, his intern days, everything he’d seen when he was in practice. He can talk to anybody about anything. … He is a great teacher. He was very much into stopping and making sure students really understood the whole picture, the whole patient. The students loved it and got so much out of it. … Our offices were right across from each other. We got to know each other personally, and we could see each other’s patients without there being any lapse in care. … He relied on me for some things, like the newer technologies, and I relied on him in terms of his experience, the political ins and outs, that kind of thing. He would leave it to me to draw my own conclusions, because he always joked that I had a lot of guts and wasn’t easily intimidated. He was like that, too. He’d always say, ‘To thine own self be true.’… His father had been a prominent OB/GYN physician in North Philadelphia who early on had a stroke, and his mother, a nurse, had to take care of the father. So he had some adversity in his childhood and didn’t go right into medicine. He went to medical school at Kirksville College of Osteopathic Medicine in Missouri, and when he first started working here, he probably felt a bit like an outsider. … Remembering his relationships with the students always reminds me to stop for a minute. We’re so fast-paced here at the center and trying to do so much at once. Dr. Gilhool always took the time to get to know the students, to talk to them about their aspirations—not just in medicine but in the rest of their lives.”