Southwest Georgia: A Sense of Place 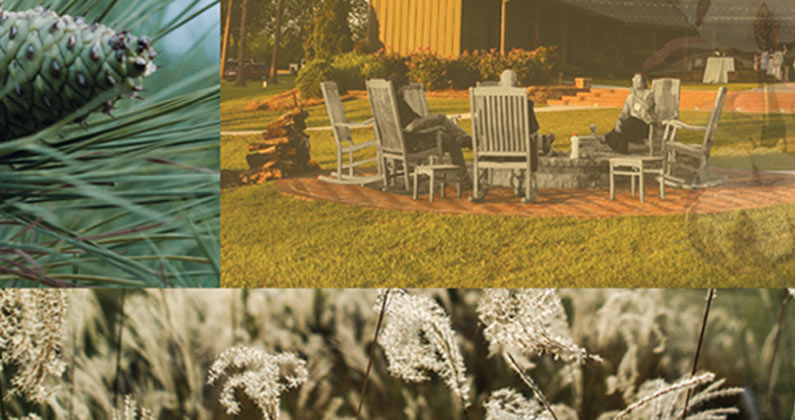 The heartland of South Georgia’s thriving agricultural sector, Colquitt County is a place known for its natural beauty and the traditions that have endured for generations.

You might fish for largemouth bass at Indian Lake, hunt bobwhite quail at the Quailridge Plantation, or tee off to play 18 holes at the Sunset Country Club.

On Friday nights each fall, you can watch the perennial powerhouse Colquitt County High School Packers at Mack Tharpe Stadium in Moultrie take on opponents from across the region.

When Thanksgiving dinner is done each year, you can join an estimated 15,000 county residents who descend on The Square in downtown Moultrie for the annual Canopy of Lights, which starts with an outdoor festival with live reindeer, live bands and an appearance by Saint Nick. It began in the 1940s with a few strands of lights from the cupola of the Colquitt County Courthouse; today, the thousands of multicolored holiday lights illuminate nine downtown blocks.

“It’s a great event, where you can meet up with old friends, go shopping and drink a cup of hot chocolate,” says Tommie Beth Willis, president of the Moultrie Colquitt County Chamber of Commerce.

Joanne M. Jones, MBA, campus officer, PCOM South Georgia, moved from Hoschton, Georgia, with her husband, Don Howell, Jr., in the spring of 2018 while PCOM South Georgia was under construction. “During the holidays, they string thousands of lights from historic Colquitt Courthouse Square and hold a lighting ceremony on Thanksgiving night. It’s like a Hallmark movie when they turn on the lights—a tradition that dates back some 70 years,” she says. “My husband and I were invited to serve as masters of ceremonies for the Christmas parade this year; it was so much fun—and such a tremendous honor!”

That hospitality has welcomed PCOM South Georgia, Ms. Jones contends. The local YMCA has offered free gym memberships to PCOM students, staff and faculty. When PCOM learned that two local high school marching bands would be participating the in Philadelphia Thanksgiving Day Parade, the College helped defray the costs incurred for the students to travel north.

“Everybody is so welcoming,” says Ms. Jones. “They have been behind us every step of the way. We are so excited to partner with philanthropic and community entities and the State to invest in the next generation of South Georgia physicians and healthcare professionals.”

PCOM’s new $30 million site, located about 2.5 miles southeast of downtown Moultrie, was built on land donated by local real estate developers Jimmy and Dan Jeter. The Jeters plan to break ground in 2020 on a development of two-bedroom, two-bath “southern cottages” adjacent to the campus that could serve as rental housing for PCOM South Georgia students.

Jimmy Jeter, who grew up in Colquitt County (pronounced CALL-quit), says that PCOM’s arrival in Moultrie will provide a boost to the sprawling county, which has some 48,000 residents. “It’s a warm, sharing community, with a lot of wonderful folks,” he says. “It’s the rural life, a slow way of living, and everybody is close to everybody. Seems like half my graduating high school class has moved back, and a new group of young people in their 30s are doing the same thing.”

Agriculture is the county’s biggest industry. Crops here include cotton, peanuts, peaches, strawberries and pecans. There’s a year-round growing season, with hardy crops like collard greens and cabbage growing during the winter months.

Moultrie’s farm industry attracts thousands to town each October for the Sunbelt Agricultural Expo, a three-day extravaganza at Spence Field that features 1,200 vendors who set up tents at the former US Air Force Base to showcase the latest in farm equipment.

PCOM South Georgia will continue to expand and support the local economy with jobs, human capital reinvestment and community development. Already, the College is providing a boost for the 12-resident family medicine residency at Colquitt Regional Medical Center, located about a mile from campus. About 70 percent of the program’s residents this year come from PCOM Georgia, the College’s Suwanee campus north of Atlanta, says Jim Matney, chief executive officer, Colquitt Regional Medical Center. Mr. Matney says two of the 2019 residents have already committed to staying in the area. In the future, graduates of PCOM South Georgia will contribute to this resident pool—at Colquitt Regional Medical Center and at other regional hospital systems. “If we can get them down here, there’s a bigger chance they will stay in the South Georgia region,” he says. “They’ll realize that the rural life is good too.”

Ethan McBrayer, DO ’19, a graduate of PCOM Georgia, and Julia Patterson (DO ’23), a first-year student at PCOM South Georgia, both hail from Southwest Georgia. Dr. McBrayer, from Tifton, just 27 miles north of Moultrie, is among those in the Georgia South Family Medicine Residency program (launched in 2016) at Colquitt Regional Medical Center. After completing medical clerkships with adjunct faculty from the Southwest Georgia region, he selected the program because of the rigorous curriculum, the camaraderie and the program’s commitment to train family physicians to serve rural communities.

“This area is just home to me,” says Dr. McBrayer. “Why would I go somewhere else to train when I could do it near to where I want to work and practice? Being born and raised in Southwest Georgia, I know firsthand what it’s like living in a medically underserved area. A personal goal of mine has been to, one day, offer quality health care to the community that helped raise me.”

Ms. Patterson, from Doerun, is among six “locals” among the PCOM South Georgia inaugural class of 59. As a college senior at Abraham Baldwin Agricultural College, she won an essay contest launched by the Southwest Georgia Area Health Education Center in coordination with the campus’s groundbreaking, which asked students how their generation could help shape the future of health in South Georgia. Ms. Patterson used the $500 scholarship check to pay for her medical school application. “I am committed to serving my community long-term,” she says. “I believe the satisfaction of serving one’s own rural community must outweigh the conveniences and amenities that could be found in a big city. By working here, I believe that I will actually be able to make a difference.”