As told by Lillian Hynes-Longendorfer, DO ‘67 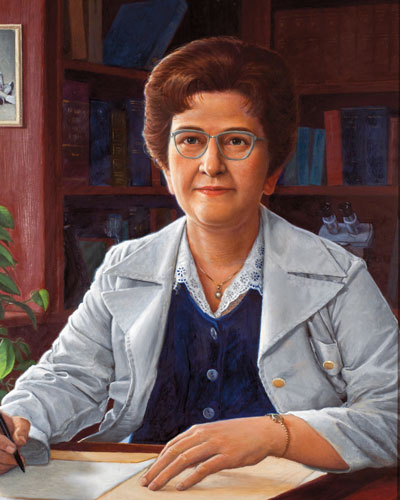 ”Dr. Cathie [at the time, Dr. Waddel] was an excellent teacher and a very hard taskmaster who wanted her students to understand the pathology of the diseases they were going to be seeing in clinical practice. When you first met her in the classroom, you were scared to death of her. I can remember pulling all-nighters just to pass her exams. But when you got to really know her, she was a cupcake. … She wasn’t only a good teacher; she was a good student as well. She’s probably among the first women to be certified in cytopathology, studying under Papanicolaou himself. I asked her to teach me how to do Pap smears, and spent many afternoons after class with her learning how to read them. … I also had the opportunity to see her on a more personal basis. A few of us women students wanted to form a chapter of Delta Omega, one of the female medical sororities on the campuses of the other medical schools in town. We needed a mentor, and she very graciously and very enthusiastically agreed to take on that role. We had our meetings at her home, where she provided both professional and personal guidance. Some of it dealt with how we were looked upon as women in the profession—good advice in terms of just being who you are and doing what you have to do. She was the first woman to chair a basic science department at PCOM [and at that time, the only woman—other than those at Women’s Medical College—who held such a position in the entire City of Philadelphia]. … Dr. Cathie suggested that I take a career in pathology. But I really didn’t like the idea of doing a lot of autopsies, and at that time they did a heck of a lot more than we do today. But after about eight years in general practice, I decided to go into something with a lifestyle that was more in line with raising a family at the same time. And I chose pathology and laboratory medicine, which led me to teaching positions and three directorships of hospital laboratories. … Years after Dr. Cathie had retired, I met her at one of the American Osteopathic Association conventions. She congratulated me on my achievements, and I told her that I had some truly big footsteps to follow in.”